There is more to the recent fire at Century Tower, which was the second such incident the building has seen in the past five years, than has been reported 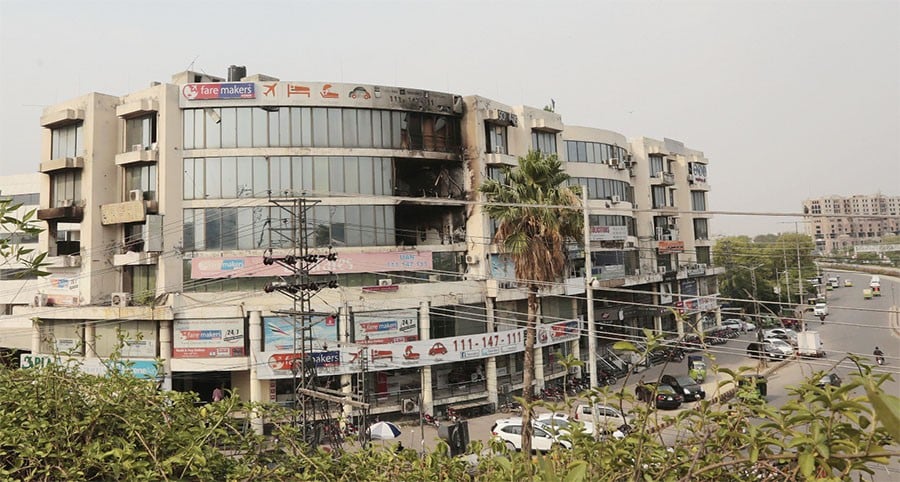 A fire broke out in the Century Tower building, in the afternoon of May 8, incidentally the same day a bomb blast occurred at Data Darbar in Lahore.

The people crossing the nearby Kalma Chowk could witness the whole scene, while those trapped inside the building stood helpless in the little terraces on the top three floors, waiting to be rescued.

Some men took their shirts off and tried to cover themselves from the heat and smoke. Outside, alarms of the fire-brigade vehicles and ambulances were ringing constantly. It was reported that Rescue 1122 had got everyone out of the building safely, using ladders, and that only one person was injured when a window glass broke.

One of the survivors, not wanting to be named, narrates that people rushed to the ground floor through the emergency exit whose last gate was locked. So they rushed back up to use the main exit, which created further panic. "What’s the point of an emergency exit if it is not kept open?" he asks.

The survivor recalls that a similar incident happened at the Century Tower, back in 2014, when the hydration system for extinguishing fire didn’t work because the water tanks were empty.

About the recent fire, Haji Munir, President, Traders’ Union, who is also in charge of maintenance of the building, says: "The incident took place because of short-circuit. It was immediately announced on the speakers that the building must be evacuated."

He claims that "about 1,000 people escaped the building successfully. A few who didn’t were later rescued [by Rescue 1122].

"We are consulting with a fire protection company for their services," he adds.

When asked about the safety measures in the building, Munir alleges that the "LDA and developers are working in tandem with each other; they have no care for the commercial structures, they are all blackmailers. We charge Rs5 per square feet for the 75,000 sq ft covered area in the tower. Almost Rs350,000 are collected every month that are spent on maintenance such as cleaning, electricity bills, elevators, and water supply. At the end of the month we are left with negative balance.

"The management also owes the traders Rs1 million that the latter paid to cover maintenance costs," he states.

According to the bylaws of the Managing Body (2003), there must be nine members of the committee including permanent members, owners’ representatives, and the representatives of tenants on each floor. It is clearly mentioned that the accounts should be maintained to ensure transparency and that the committee is responsible for maintaining the building under the guidelines provided by the builders.

According to the bylaws of the Managing Body (2003), there must be nine members of the committee including permanent members, owners’ representatives, and the representatives of tenants on each floor. It is clearly mentioned that the accounts should be maintained to ensure transparency and that the committee is responsible for maintaining the building under the guidelines provided by the builders. But Haji Munir insists that no account is being maintained, which means that there is no track of expenditures.

The Century Tower building was developed by the Creative Group, Lahore, between the years 1996 and 2000. One of the developers, Pervez Hashmi, says that when the building was designed it was efficiently equipped with a fire extinguishing system and hydration system. Latest technology was installed on every floor. After the developers sold the offices and shops, they came up with their own mechanism for the building maintenance.

"Unfortunately, the committee in charge of maintenance has failed its duties," he declares. "They should’ve made sure that if an electrical renovation is carried out at any shop/office, it is done under the supervision of the recommended electrician who would be working with proper work guidelines."

Hashmi claims that the fire started in office number 208 and spread to other places.

One of the signatory authority and co-developer/co-owner of the tower, Mrs Rukhsana Sohail Riaz says, "The building is designed in a way that if it is maintained according to the 2003 agreement, such incidents can’t happen in the first place.

"To my knowledge, the reason of the fire was not short-circuit but an LPG cylinder that can be clearly seen in the video footage also. It is illegal to keep such inflammable materials in the building. I believe the people who are illegally running the plaza affairs are involved in malicious activities. Nothing is transparent!"

Riaz says she served a legal notice to those managing the building for profiteering; she is yet to hear back from them.

She also warns against the illegal construction that violates the building bylaws: "The owner of a shop on the ground floor has illegally constructed a staircase in the building that leads to the mezzanine floor. As the building is shock-proof, such post-construction demolishment of a part puts the entire building in danger."

She regrets the fact that despite being a permanent member of the maintenance committee, she is not taken on board on all matters. "Pervez Hashmi, who happens to be my real brother, is forcefully keeping me out of the decision-making process and helping the illegal maintenance committee. […] I have been silenced by all the men in the managing body every time I requested to maintain the accounts so that everything is aboveboard. FIRs have been lodged against me by somebody who is a convicted land-grabber at the Ghaziabad Police Station.

In the absence of records, it is difficult to ensure the safety of the people. There are numerous high-rise buildings around the Century Tower but undemocratic and illegal procedures are putting the lives of the people in danger because then there is no transparency.

On the evening of May 8, DCO Saleha Saeed reached the spot and supervised the whole rescue process. The next morning, a fire broke out in the Al-Qadir Heights building, only a few blocks away, apparently because of short-circuit. Mercifully, the fire was controlled through fire extinguishers.