A case of failings in healthcare

Patient Pakistan is a collection of over 50 articles and essays on health and related matters -- from diseases, laws and mortality, to policies, regulations and safety nets 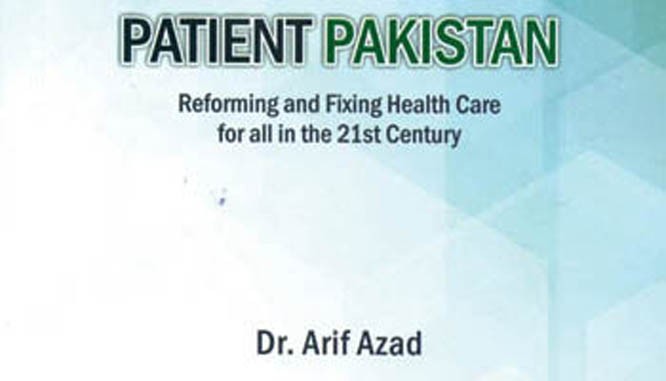 Health and education are perhaps the most neglected sectors in Pakistan. The state spending on health and education is minimal, resulting in a dismal state of government schools and hospitals. This negligence is not only caused by the misplaced priorities of the state, it is also a result of an overall lack of concern for these issues, as evident from the never-ending campaign against polio vaccination across the country, especially in rural areas. People lack awareness of basic health issues.

Almost all types of media -- electronic, print, and social -- barely cover health and education issues. You flip one tv channel after another and you will hardly find a good discussion or programme about these matters. The same applies to newspapers which are overwhelmingly political, and to some extent cover entertainment and sports. Op-ed pages of both English and Urdu newspapers are replete with economic and political articles that seldom discuss health and education. Dr Arif Azad has been writing exclusively on health issues for the past many years.

The book under review, Patient Pakistan, is a collection of his articles on health and related matters. Being a medical doctor and then topping up his qualifications with masters in public policy and public health, Dr Azad has impressive credentials to pen such a book. It contains over 50 articles and essays, divided into 11 chapters that group together writings on various themes, from diseases, laws, and mortality to policies, regulations, and safety nets. The first chapter is the longest with 10 articles related to the issues of policies, processes and practices.

Dr Azad begins by analysing political promises related to health, made by political parties in their election manifestoes. He informs us that the health spending by the government of Pakistan has been stuck at less than one percent of the GDP for many years. To be exact, he gives a figure of 0.6 to 0.7 percent of the GDP in Pakistan going to health. Though all political parties repeatedly pledge that they would increase health funding, they are somehow unable or unwilling to do much when they actually come to power.

For example, he cites the PML-N and the PTI -- both pledging an increase in funding between 2 to 2.5 percent; whereas the ANP and the MQM pledged an increase up to 5 percent. All these parties have been in power at various times during the past decade but we have seen that their pledges were not met. Dr Azad gives a specific example of immunisation that was an integral part of almost all party manifestoes barring the ANP and JUI-F in 2013. Most probably it was because of objections to vaccinations raised by extremists that caused this omission.

Chapter five about laws and regulations and chapter eight about challenges in best health practices are very informative, and give us a wealth of information about these vital issues. It is shocking to note that worldwide, hepatitis C affects between 150 to 200 million people annually and the number of deaths are staggering, touching almost half a million annually. Only in Pakistan some estimates put the number of affected people to 15 million, with 28,000 cases added to this number every year. Perhaps the highest ratio of affected population is in Egypt with 10-15 percent of the population infected with hepatitis C.

While the government of Egypt has managed to negotiate a deal with big pharmaceutical companies to provide affordable treatment, Pakistan has been lagging behind in these efforts. Dr Azad suggests that keeping in mind the increasing poverty and lack of nutrition among the common people in Pakistan, it is imperative that the government takes a bold initiative to offer subsidised treatment to hepatitis C patients. Globally speaking, the WHO has been trying to help the poor countries in this matter, but sadly the WHO itself is suffering from financial woes.

Over the years, the WHO has remained underfunded, with stagnant and capped contributions from member states. Now, the WHO’s growing reliance on outside contributions has implications for its independence. The member states have consistently refused to raise their level of annual contributions. As the WHO is on the verge of decline in its international standing, there is a need to shore up the worldwide consensus for the organisation’s reactivation. If the WHO slides from its foundational aspiration, it will be a disaster for the worldwide health initiatives, Dr Azad warns us in no uncertain terms.

The second chapter of the book, titled Tiny predators, big problems, is about increasing antimicrobial resistance (AMR) that is threatening the humankind. In countries such as Pakistan it becomes even more acute as over the counter purchases of antibiotics have resulted in mass consumption of these drugs. Since no prescription is required in Pakistan for purchasing antibiotics, self-medication has multiplied and people are getting used to AMR. According to the writer, the abuse and overuse of antibiotics has reached an alarming level and almost on an industrial scale in Pakistan.

Another useful chapter is on the spread of diabetes in the country. Though official statistics have put the number of people living with diabetes at eight million, the actual number is much higher and may be around 35 million with 1.5 million children suffering from it. That means an estimated one in six persons is living with confirmed diabetes. While other countries have tackled this scourge effectively, Pakistani authorities have been much more relaxed in this matter, and have done almost nothing to improve the country’s misaligned and under-resourced health system.

While in other countries, a healthy promotion of physical activities has done wonders, in Pakistan--especially in urban areas--there is not much space left for physical activities. The government officials and state functionaries themselves have been involved in misappropriating public spaces. Dr Arif Azad reminds us that regular exercise is the key to tackling diabetes and all those who shun physical activities are likely sooner or later to suffer from unregulated sugar in their bodies, irrespective of their genetic makeup. He suggests a high level of taxes on fuzzy drinks and beverages.

One of the most relevant chapters for readers in Pakistan is Sex and Mortality. Here the writer discusses the sexual and reproductive health issues, maternal and child mortality and population planning challenges. The book is a rich source of analysis and information which must be read by common people and medical practitioners alike. It is written in flowing and interesting prose that compels the reader to keep reading.

It will not be out of place to suggest that this book deserves to be bought by libraries across the country, especially in medical colleges and nursing schools.

A case of failings in healthcare