Bureaucratic hurdles have halted plans to hand over a derelict Tollinton to NCA, which means that the building shall continue to exist as Lahore Museum’s junkyard 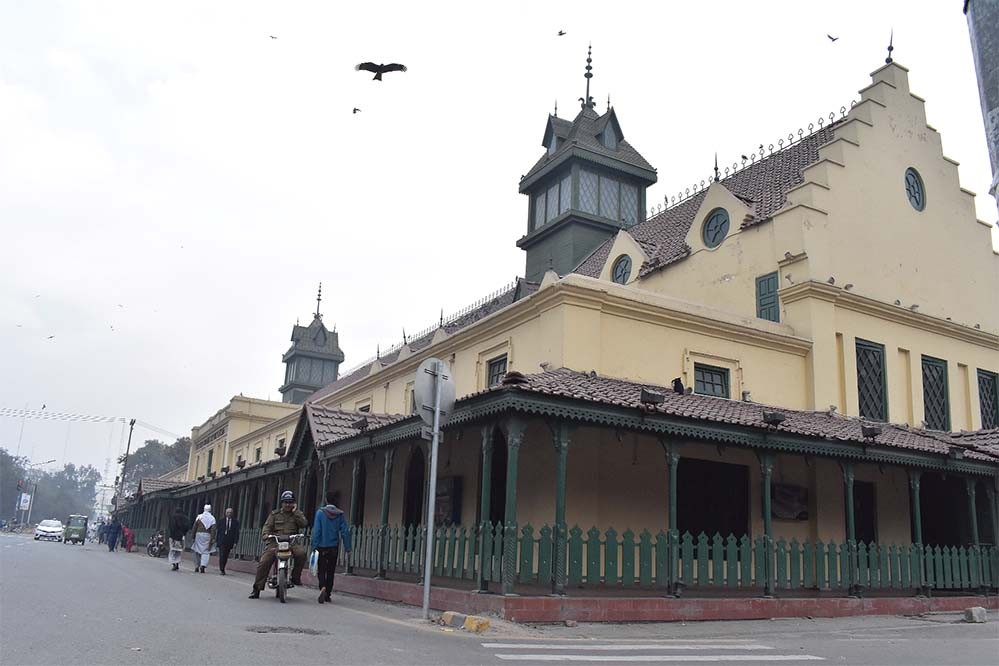 Farrukh Javed Kazi, 65, reminisces the charm of the old Tollinton Market of Lahore. As a student at the Punjab University, the market was a much loved change for the students, he narrates. After long study hours in the old and dusty classrooms of the Old Campus, he would go to the market to sip on some hot coffee.

Apart from the few cafés, Tollinton was a market for fresh fruits, vegetables, poultry, and other general grocery items, and a terribly frequented place for the residents of the city. "The place had permanent visitors," says Kazi. "Among these were some of our teachers, lady-wives of our professors, and the elite of town including film stars like Zeba, Mohammad Ali, and Bari Malik."

But the Tollinton of today tells a different story: one of termite attacks, seepage issues, and almost no activity. The market was shifted to another location in 1993. It stayed empty for years, and was handed to the Lahore Museum after a complete restoration in 2006. Looking at the current situation of the Tollinton building, now known as the Lahore Heritage Museum, it was brought up by the board members of the museum that the building be given to National College of Arts (NCA), which may lift the historic building out of its present derelict form. While many members were in favour of the property transfer, bureaucratic hurdles have halted the plans for now, letting the building to continue as Lahore Museum’s junkyard.

Kamran Lashari, currently Director General (DG), Walled City of Lahore Authority (WCLA), who is also a board member of the Museum, had initiated plans of restoration of the old Tollinton building in 2003. As DG Parks and Horticulture Authority (PHA), he had formed a committee with Sajjad Kausar the architect with plans of turning the building into a cultural space open to the public. "We had decided that one half of the space would go to an arts and crafts market and the other half would be used for ongoing exhibitions," Kausar tells TNS. "We didn’t know it would be given to the museum at that point."

In 2005, Lashari was transferred to another department, and the government decided to let the Museum have the newly restored building. Almost 13 years later, the building is vastly underutilised and grossly neglected. There is a serious termite problem, the paint hardly seems to be covering the walls anymore, and the shops that were built to become small arts and crafts shops and cafés are now stuffed with the Museum’s old and broken furniture.

The building is vastly underutilised and grossly neglected. The shops that were built to become small arts and crafts shops and cafes are now stuffed with the Museum’s old and broken furniture

"It almost feels like a conspiracy to let it deteriorate to such an extent that it collapses on its own," says Ajaz Anwar, artist and conservationist. "There needs to be some accountability of who was unable to keep a quality control of the space, how the current state came about, and why has so much money been wasted."

According to Anwar, who is also the Information Secretary of the Lahore Conservation Society, a huge handicap for the museum is that with one or two exceptions the director of the museum has never been an expert in art, archeology, architecture, or conservation; it’s always a civil servant who has no knowledge of running a museum, and by the time he develops some understanding, he is transferred."

Umair Javed, a political analyst, says that the Lahore Museum is a good example of what is considered a lucrative posting and what is considered a punishment for civil servants. And this is something that plagues the entire bureaucracy. A posting in a department that does not directly deal with the public is usually under resourced, which means the posting does not come with a lot of privileges, including reduced allowances, or a house, etc.

So, "every bureaucrat who comes in, barring a few, this is something they want to escape from as soon as possible," he adds. "And it has huge implications for the way they perform in such departments."

Whether the issue is the administrative structure of public sector institutions in Pakistan or a lack of expertise in the subject of those running the museum is another debate. For Lashari, the museum itself has so many issues it has not been able to resolve, and it does not have the money or the capacity to a run a historic building like Tollinton.

"It [Tollinton] needs a solution," he insists, "both in terms of finance and skillset. And, for that, you need imagination, creativity, and marketing. I don’t expect a very traditional museum management to do that."

Lashari is of the view that NCA may be a better institution for the kind of work this building requires, as the college may have the capacity and creativity needed to turn the place around and create a space open for the public by hosting exhibitions, performances, and the like.

However, while many board members feel that NCA would be better fit to run and manage the place, the museum management is adamant to keep the building as part of the Lahore Museum. To quote Naushaba Anjum, Additional Director at Lahore Museum, there are many articles that are not displayed at the museum because of a lack of space, so we are able to display those at different exhibitions held in the Tollinton building.

Anjum further states that behind the building there is a parking lot for visitors that is a source of income for the museum, "So why should we give away our extra space and extra source of income to some other institution?"

Murtaza Jaffery, Principal, National College of Arts, says that it was the museum board members who had initiated the idea that NCA would be better able to utilise the place. "As the Principal of NCA, I’m also one the board member, and I have said on many occasions that I don’t have a problem with being responsible for the [Tollinton] building.

"Twelve months a year we have foreign scholars visiting the campus, different workshops happening, which we can take to Tollinton," he says, adding that the college has the know-how and the right people needed to turn this into a space that can engage general public and attract them towards arts and culture in the city."

As of now, the main reason cited for the building to remain with the museum instead of being handed to NCA is that while the Lahore Museum falls under the provincial government, NCA is a federal entity, which creates a complicated situation for a property transfer. Till an arrangement is made where the building can be leased to NCA or a way around a property transfer is found, the once deeply adored Tollinton building shall remain empty and dilapidated.