Agreement with the IMF on fresh bailout package, upcoming review of Financial ActionTask Force and finalisation of next budget are major challenges for the government 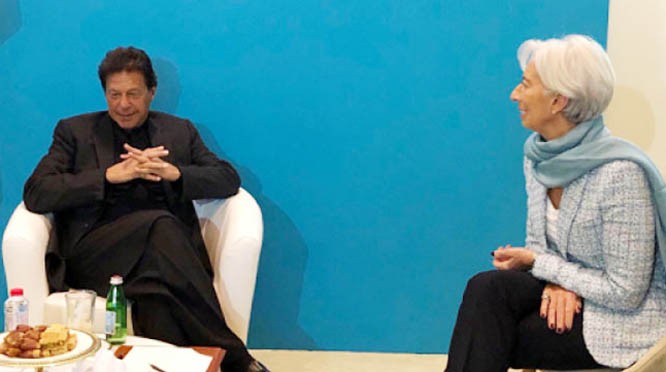 Pakistan’s economy is faced with three major challenges -- coming to agreement with the IMF on fresh bailout package, crucial upcoming review of Financial Action Task Force (FATF) and finalisation of next budget for 2019-20. At the same time, the PTI-led government chose to oust key players of its economic team.

This process of changing the economic team started after Asad Umar’s return from Washington after attending annual meeting of IMF/World Bank. He was asked by Prime Minister Imran Khan to change his ministerial portfolio but he opted to step down. Everyone expected that the economic team would be changed after finalisation of IMF talks and announcement of the upcoming budget. But things started unfolding before that.

The timing of showing the door to key members of economic team in the middle of IMF talks shocked everyone, including top policy makers as no one was expecting this abrupt move without considering complexities of the ongoing parleys with the IMF.

The IMF mission is in Islamabad for technical talks. It was surprising for everyone when the former Governor State Bank of Pakistan (SBP), Tariq Bajwa, was summoned by the prime minister on May 3 when he was holding parleys with the IMF team. The premier told him to tender his resignation. The governor of central bank cannot be removed under State Bank of Pakistan Act 1956 with a stroke of pen.

However, Tariq Bajwa told this scribe that he opted to resign because he did not want confrontation of SBP with the government at a time when the economy was in bad shape. So he felt relieved after opting to resign, he said, adding, once he had asked the PM in his first meeting that if the government desired he could resign but he was asked to continue his work.

The PTI quarters had always considered Bajwa a bureaucrat close to former rulers belonging to the PML-N. It is perceived that Tariq Bajwa was not willing to do things the way the government wanted to do in cases related to fake bank accounts. It was also alleged that he had devalued rupee without taking the federal government into confidence. But it proved wrong as he had always consulted with the then finance minister, Asad Umar, before allowing market to make adjustments in the currency market. On discount rate, it is argued that the SBP had almost doubled the policy rate, bringing it up from 5.75 to 10.75 percent in order to suppress demand, even ignoring core inflation.

It is also believed in Islamabad circles that the top changes in the economic team were brought on the wish of the IMF/World Bank. When contacted, IMF Resident Representative in Pakistan, Teresa Daban Sanchez, said, "The resignations and appointments of senior officials are entirely the decisions of Pakistani authorities."

One top official who dealt with the International Financial Institutions (IFIs) said the international lenders talked to the Pakistani authorities instead of any individual.

Presenting the next budget in line with the IMF conditions as well as avoiding burdening of low and middle income groups will be another challenge for the incumbent rulers and policy makers in order to avoid any political upheaval on streets of Pakistan.

Before the unceremonious removal of Chairman FBR Mohammad Jehanzeb Khan, the tax collection machinery had faced a revenue shortfall of Rs355 billion during first ten months (July-April) period and it was projected that this shortfall could go up in the range of Rs450 to Rs485 billion till end June 2019.

As a matter of fact the shortfall was expected from day one of the current fiscal year mainly because the advances were obtained to show inflated revenue collection of the last financial year. The tax incentives were provided in the last budget but the PTI-led regime never made any effort to rectify the blunders despite tabling two supplementary budgets during the course of the ongoing financial year.

It is also a fact that the FBR failed to undertake any exercise for broadening of tax base in an effective manner and if any campaign was launched on the pressure of Prime Minister Imran Khan, it was left halfway. It was just an eye-wash to send notices to high net worth individuals but it was done in haste and without proper homework.

The FBR officials were clueless about defending this massive shortfall in a year when the economy was moving slowly as the Large Scale Manufacturing (LSM) showed negative growth of 2.4 percent. However, there is still potential of increase in revenue collection in a country where the volume of black economy is beyond imagination. But revenue collection cannot improve with demoralised workforce of the FBR.

Now the government has appointed Reza Baqir as new Governor SBP and Shabbar Zaidi as Chairman FBR. There are enormous challenges lying ahead. First of all, Pakistan’s economic managers will have to strike a deal with the IMF on favourable conditions.

The IMF, which is considered a last resort for countries facing balance of payment crisis, does not lend money on the wish of recipients. However, finance advisor and renowned economist Dr Hafeez A Pasha has suggested to the government to convince the IMF on staggered adjustment policy over a period of 2 to 3 years. If the IMF wants to slap taxes to fetch Rs700 billion to generate revenues it would further slowdown the economy. The fiscal adjustments, he said, should be done in a gradual manner but it will remain a major challenge for the economy when the budget deficit is expected to escalate in the outgoing financial year. The conversion of primary deficit into surplus will be a major daunting task under the IMF programme.

The second most important target will be related to Net International Reserves (NIR) to jack up foreign reserves held by the SBP on quarterly basis. If the SBP is required to buy dollars from the open market to meet its NIR target, it will increase demand of dollarisation and could cause hike in exchange rate.

Third, the withdrawal of subsidies for energy sector and erasing of circular debt will be another condition if Pakistan and IMF agree on staff level agreement for fresh bailout package of $6.5 billion.

The smooth sailing from FATF’s upcoming review is another daunting task lying ahead for the country’s economic managers as Pakistan cannot afford to slip into category of blacklist having far reaching negative impact on the economy of Pakistan.

Finally, presenting the next budget in line with the IMF conditions as well as avoiding burdening of low and middle income groups will be another challenge for the incumbent rulers and policy makers in order to avoid any political upheaval on streets of Pakistan.

Now is the time to undertake required structural reforms instead of delaying it by increasing dependence on foreign loans. The approach of status quo will provide us no solution so let’s work together to find out-of-box solutions to our decades-old problems.