How a dialogue with American authors Elliot Ackerman and Lea Carpenter, on the art of storytelling, organised by CAP, turned out to be an open, uninterrupted and uncensored meeting of minds 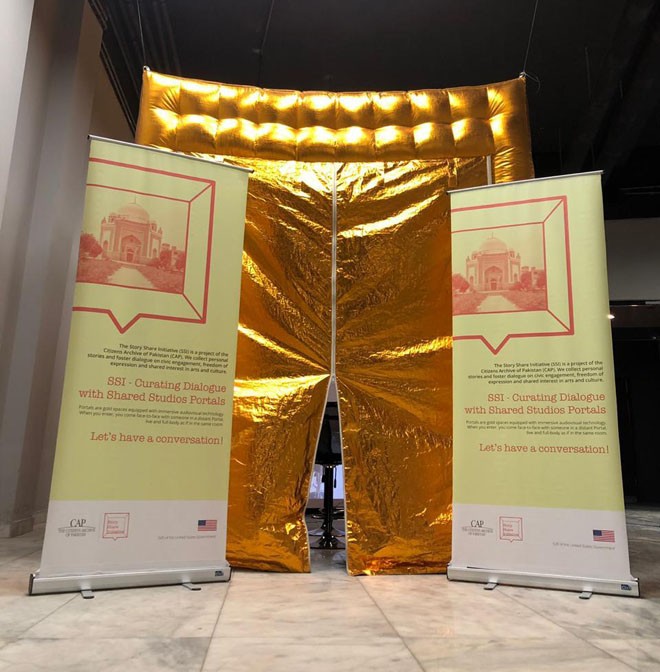 "It looks like a rejected Jeff Koons’s art project." That was my first thought when I looked at the "Portal" set up in the basement of the National History Museum, Greater Iqbal Park, Lahore.

A Jeff Koons rejected project or a particularly millennial puffer jacket. What was inside is what finally dispelled the idea and ended up being the absolute opposite of the initial whimsy I had felt.

I had been invited by the Citizens’ Archive of Pakistan (CAP) to participate in a dialogue about the art of storytelling with American authors Elliot Ackerman and Lea Carpenter. This had been organised as part of their Story Share Initiative, which is a "series of curated dialogues where we connect artists, writers, journalists, performers, poets, architects, literary/cultural critics, storytellers -- people who are guardians of Pakistani art and culture -- to students from various institutions specialising or interested in these aspects of art and culture."

To make this exchange happen, the inflatable portal that I witnessed sourced from US-based Shared Studios, which is a "gold space equipped with audiovisual technology. When you enter the portal, you come face-to-face with someone in a distant portal, as if they are in the same room." This premise, too, was reminiscent of another art project: ‘My East is Your West,’ the Lahore/Venice project, which was a collaborative effort between Rashid Rana/Gujral Foundation and the Lahore Biennale Foundation. The live art installation was a part of the Venice Biennale in 2015 where audiences in an exclusive space setup in the Liberty Market, Lahore, were connected to audiences in a similar, mirrored space in Venice.

However, for the Story Share Initiative, the focus was on the craft of storytelling in an era of great political and social change. Delightfully brainy and sharp students from Government College University (GCU), and aspiring author Safa Dar, as well as journalist Rhytha Hejaze joined me inside the portal. We were face to face with Lea Carpenter and Elliot Ackerman, two published writers in Brooklyn, New York, and Mariam Alsikafi, Executive Director of CAP’s North America chapter.

Out of the two guests we were in conversation with, Elliot Ackerman has authored two novels, Waiting for Eden and Dark at the Crossing, and contributes to a number of publications such as Esquire, The New Yorker, The Atlantic, and The New York Times magazine. He has also served for eight years in the US Marine Corps and was deployed for active duty in Afghanistan and Iraq post-9/11. His military, combat and intelligence service background was something that intrigued the panelists on this side of the world, because we do not normally get to interact with people who have completed this sort of a working arc in merely 39 years of their existence. We also do not get to interact with former soldiers who would candidly discuss the role of war in shaping, or disrupting, the potential of human civilisation, but that is a discussion for another day.

The other author present was Lea Carpenter, who has authored two novels, Red, White and Blue and Eleven Days -- both espionage mysteries inspired by her father’s military background and his WWII service. Her debut novel, Eleven Days, is currently being adapted for TV, and she wrote the screenplay for Mile 22, a film about CIA’s Special Activities Division, starring Mark Wahlberg, which is coming out in July.

The conversation veered from the art of writing (which, according to both Ackerman and Carpenter, requires strict discipline, deadlines and an ability to remove distraction by virtue of focusing on the task at hand), to accidental journalism.

The conversation started with a frank explanation from our side about the state of press and press freedom in Pakistan and how aspiring and even senior journalists are facing more and more hurdles into telling stories that they want to tell. Ackerman was quick to state, "This is the best worst time to be a journalist in the world right now."

He explained that while media and journalists are under attack across the board, financial issues have now culled the ideal of the "foreign bureau head" that was once so popular with large media houses. Now there are hardly any foreign reporters stationed permanently in far-off countries. More and more newspapers are relying on native journalists to tell local stories for an international audience and this is providing a chance to younger, social media and tech savvy journalists to shine.

GCU students, studying English literature and political science, were keen to know how both Ackerman and Carpenter, who have written books so deeply immersed in military culture, had been able to score interview with military personnel and archives. For Carpenter, the process wasn’t too difficult because of Right to Information laws being implemented in the US and her interview subjects volunteering to talk to her. Ackerman had pretty much been an ‘inside man’ himself so his response was akin to writing what I knew. I sadly couldn’t see any of us in Lahore being so nonchalant about such a task.

The conversation veered from the art of writing (which, according to both Ackerman and Carpenter, requires strict discipline, deadlines and an ability to remove distraction by virtue of focusing on the task at hand), to accidental journalism (in which Ackerman told us about the many times where he had written reportage because he was at the right place at the right time, particularly close to Turkey’s border with Syria), to making connections (use LinkedIn judiciously and build a local work profile that can be used to send cold pitches to international publications). Ackerman spoke more than Carpenter because of the general interest in journalism, but Carpenter provided valuable insights into difference between writing for a literary audience and for a visual audience.

A few questions posed to the authors from our side of the portal were suavely dodged, chief of which was by a GCU student who asked Ackerman about US imperialism, the impact and outcome of war in Iraq and Afghanistan, and how war changes human beings. He handled the queries with as much grace as one can muster when challenged with the unexpected, and mentioned a story about a former Al-Qaeda operative who had fought in Afghanistan at the same time as he was there. The meeting happened years later in Turkey and together they shared, according to him, curiosity about the other’s time during the war despite a linguistic barrier. They instead wrote dates on a map of the country, pointing out where each had been, when. A cosmic dance, Ackerman said poetically, in which the dance partners were revealed to each other years later.

He also mentioned how the protagonist of one of his novels is an Afghan man who kills an American man and the story is told from his perspective. Employing diplomatic charm, he said that he doesn’t want to live with the negativity of otherness of people and by passing judgment.

Carpenter also asserted that her novel Eleven Days is set in the backdrop of the Abbottabad raid in Pakistan in which Osama Bin Laden was killed. However, the protagonist is a mother whose soldier son is missing in action, and the story is about how ordinary lives and worries co-exist with history’s great and grotesque events.

The session ran for an hour and a half and was more immersive and intelligent than any hurried and harried talk sessions that have become a hallmark of Pakistani literature festivals.

In that bubbled up portal, the fact that CAP facilitated such an open, uninterrupted and uncensored meeting of the minds at all is a fact worth cherishing.