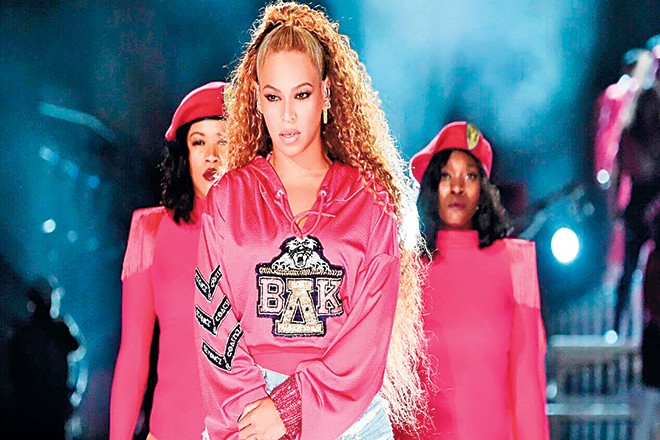 Beyonce, an artistic, dynamic and insanely popular performer whose designation as the first black woman ever to headline Coachella kind of erases the fact that her presence honoured the festival, not the other way around.

Music festivals have evolved a lot since the 1960s, but their archetypal crowds have stayed pretty much the same: drunk or high young people in sandals, fringe and the occasional culturally appropriative feathered headpiece. From Woodstock to Warped Tour to Electric Daisy, these audiences have also remained overwhelmingly--if by no means exclusively--white.

Whether it’s due to exorbitant ticket prices, a culture of exclusion or both, the fact that artists of color have dominated these events since Jimi Hendrix set his guitar on fire at Monterey Pop in 1967 hasn’t done all that much to alter the demographics.

Enter Beyonce, an artistic, dynamic and insanely popular performer whose designation as the first black woman ever to headline Coachella kind of erases the fact that her presence honored the festival, not the other way around. Fans everywhere (myself included) canceled their Saturday-night plans and stayed up until the wee hours of the morning to watch the first of her two sets, last April, via live stream.

Even for pop’s reigning perfectionist, it was a tour de force--a victory lap that featured guest appearances by Beyonce’s husband Jay-Z, sister Solange and former bandmates in Destiny’s Child and, more importantly, a tribute to HBCUs that packed the sky-high bleachers behind Beyoncé with black musicians, singers and dancers executing their parts with choreographed precision. If she couldn’t change the makeup of the audience on that field in Southern California, the woman behind Lemonade could at least construct a towering spectacle of black excellence.

It was such a complete, telegenic performance that when Netflix announced Homecoming--the just-released film of the event known to history as "Beychella"--it was hard to imagine how Beyonce could improve upon what so many of us had already seen. But overdelivering is her trademark, so it’s not too shocking that her latest audiovisual release (which coincides with a surprise 40-track live album) serves a powerful purpose beyond commemorating a career highlight. Along with cinematically shot renditions of hits from ‘Say My Name’ to ‘Crazy in Love’ to ‘Formation’, Homecoming recontextualizes the show in a way that claims the most influential live music event in North America for black culture.

Like Lemonade, the film fills much of the space between songs with the words of women and men Beyonce admires. This time around, many of those luminaries (Toni Morrison, W.E.B. DuBois, Marian Wright Edelman) are HBCU alums. The yellow and pink sorority hoodies she and her backup performers wear aren’t just an aesthetic; Beyonce explains in a voiceover, that she has always wished she’d attended one of these institutions. "My college was Destiny’s Child," she says. So instead of sharing space in the classroom with her generation of black intellectuals, she has ended up bringing generations’ worth of black intellectual history to audiences around the world--including the sea of white kids at Coachella.

That history is defined by struggle, which happens to be the other great theme of Homecoming. Sweaty rehearsal footage is a convention of music docs, but here Beyonce (who co-directed the movie with Ed Burke) gives them purpose. She recounts the troubled pregnancy that yielded her twins and the months-long process of recovering for Coachella. Her "***Flawless" catchphrase "I woke up like this" has always something of a joke; in Homecoming, the song immediately follows Beyonce’s confession that her postnatal regime included an extremely restricted diet that she’d never put herself through again. "What people don’t see is the sacrifice," she says. No one wants to hear a person of her net worth complain about going without, but she’s not really doing that. In shots of hard workouts and tough-love pep talks, she’s providing evidence of how hard she--and her collaborators--worked to pull off such a seamless show. Excellence can be a team effort. And it’s exhausting.

Though it may not be as virtuosic or challenging or artistically important as Lemonade or her 2013 visual album Beyonce, even in seemingly straightforward performance footage, Homecoming uses the concert film format to give Beychella fresh context. Unlike in the live stream, viewers don’t have to sit through a Post Malone set that’s gone on too long to get to the main event. Shots in black-and-white and the blurry, desaturated colors of home videos offset the otherwise crisp color cinematography, creating the impression that these images are already a part of history.

Most powerful of all are the ample clips of the Coachella crowd. In Beyonce’s rendering, the traditional music festival demographics are inverted. Black concertgoers, particularly women, are almost always at the center of the frame--shouting with delight, crying with joy and singing along to every word. "I wanted every person that has ever been dismissed because of the way they look to feel like they’re on that stage--killing it," she recounts in the film. Judging by the ecstatic audience response, she really did make a long overdue first feel as comfortable as coming home.