From online to reality

The sit-in by the female students of LUMS was not a power move, it was the start of a revolution. 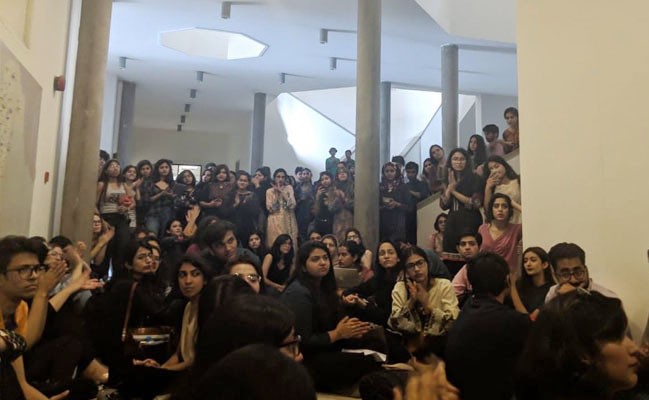 Recently a closed Facebook group by the name of "Dankpana ft LUMS" was exposed by female students of LUMS. The group had around 600 members, mostly men. The content of the group was largely targeted at female students of LUMS and made lewd, derogatory, sexualised and rape memes targeting the female student body in the name of dark humour. After the expose, female students of LUMS sprung into action, which led to a sit-in of 200+ students (both male and female) outside the office of Dean of Student affairs, demanding disciplinary action against the admins of the group. The case is being looked at by concerned authorities of LUMS and students await the final verdict. However, this episode has started a long debate about freedom of speech amongst students and creating a safe space for everyone on campus.

An email sent out by Dean of Student Affairs to the student body stated that "values of our university are anchored in maintaining a tolerant atmosphere that is marked by mutual respect -- especially of dissenting opinions. However, there should be no doubt that while respecting each other’s opinions, the administration will take all steps to ensure a safe and welcoming environment for all members of our community."

One might question, "what is so wrong with a few memes?" To the female students of the university, however, these are not just memes. The content of the group represents the mentality of those 600+ students with whom these women interact on a daily basis. The content showed that these men harboured such thoughts about their female friends and colleagues and perhaps the only thing stopping them from acting on these thoughts was the fear of being called out or caught. After the group was revealed, a lot of female students commented on how they felt unsafe on-campus. To some extents, our educational institutions become our second home, especially if you are a woman enjoying the freedom of staying away from home for the first time in your life. Campuses are supposed to act as safe spaces for everyone, regardless of gender.

Online harassment is easy to brush off as "naïve" or as "done without much thought", but if these thoughts and ideas are left alone and allowed to manifest in the young minds without any consequences, they can lead to drastic real-life actions. We have seen multiple times how online uproars have reverberated through actual lives and ended up with irreversible actions, e.g Qandeel Baloch’s and Mashal Khan’s murder. The idea that it was just a group with memes cannot justify the act of inciting violence or rape against students for the sake of dark humour.

But isn’t dark humour supposed to be offensive? Isn’t a crackdown on this a group a crackdown on humour and freedom of speech altogether? Answers to these questions vary from person to person but I believe that there is nothing funny in endangering lives of an already marginalised population. LUMS is perhaps one of the very few institutions that can pride itself on providing equal opportunities to its male and female students, but it still does not take away from the fact that women are in fact a marginalised group in this country. Jokes at the expense of the safety of such groups are not and should not be considered funny. An educational liberal arts institution taking an action against such form of bullying can send out a strong message of support to women who are already struggling to find a safe place in public spaces.

Perhaps its time to say that boys should not stay boys, and boys who do should be called out for their problematic behaviour. Inciting violence is not funny, making someone feel unsafe is not funny, joking at someone else’s expense is not funny and rape jokes are not funny. It takes very little time to flame these sparks to a full fledged fire. If women of the country want to progress and thrive, then they need to start calling out men for such behaviour. The sit-in by the female students of LUMS was not a power move, it was the start of a revolution.

From online to reality