A brief of the First International Conference on Punjab: History, Literature, and Civilisation held recently at the University of Sargodha 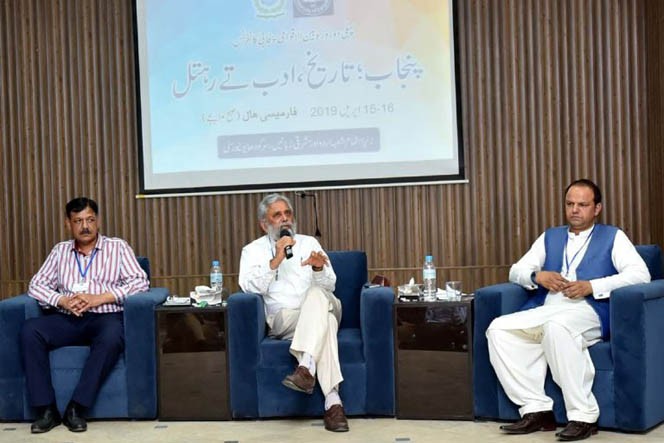 The University of Sargodha has been in the news for all the wrong reasons. The former vice-chancellor of the university was arrested by NAB on the charges of misuse of powers. The university’s reputation nosedived and the higher education sector in Pakistan suffered a blow. So it was a pleasant surprise to attend an international conference at the University of Sargodha and listen to some world-class scholars and intellectuals between April 15 and 16, 2019.

The event, First International Conference on Punjab: History, literature, and civilization, afforded me an opportunity to interact with and learn from the likes of Prof. Pritam Singh from the University of Oxford, UK, and Dr Saeed Khawar Bhutta, professor and chairman of the Department of Punjabi, GC University Lahore.

Prof. Pritam Singh teaches at the Oxford School of Global and Area Studies, University of Oxford, UK, and specialises in development, human rights, nationalism, radical political economy, religious revivalism, secularism, and sustainability. In his paper presented at the conference, he especially focused on diversity and its contribution to the civilisation of Punjab. His main thesis was that diversity enriches society; it is healthy and makes intellectual development possible.

He also discussed the role of mother tongues in communities and how preserving the diverse mother tongues in societies help children in their emotional development. "When a single language is imposed on society, it loses its richness and the people become poorer in their expression".

Prof. Pritam Singh gave examples from across the world to prove his point that the languages which are considered ‘developed’ today were once dismissed as rustic and immature. For example, the English language itself till the 12th and 13th centuries was not given much importance by the elite even in England. The French and Latin languages were promoted and taught. It is quite possible that in future, the Chinese language becomes dominant by the end of the 21st century. Therefore, sacrificing a mother tongue in the name of development doesn’t make sense.

For the holistic development of the child it is important to encourage creativity and originality, which is possible only when children are taught in their mother tongues. According to Prof Pritam Singh, any struggle for equality in society has to be fought in a local language. "In Punjab, or anywhere else, you cannot mobilise people if you don’t speak their language. There may be exceptions, but in most cases communication in a local language is a must for political struggle." He gave examples of Baba Fareed, Guru Nanak, and many others who could mobilise people only by communicating with the local people in their own language.

In the present-day world, globalisation is not only economic and political domination, it is also linguistic domination which is imposing a homogeneous culture and tongue i.e. American or English. "It is one of the major dangers of globalisation that is changing the nature of diverse cultures and languages." Prof Singh cited an example of East Punjab where the use of Punjabi was the demand of the people who fought hard against the domination of Hindi in courts. Now all over East Punjab, most court proceedings are held in Punjabi and even records are kept in Punjabi so that the common people can read and understand what is being said and reported in the courts.

In East Punjab, every student has to study Punjabi up to the bachelor’s degree level. For all this, state support is a must. Even in Canada, Singapore, and the UK, the Punjabi language is being offered as an optional subject for anyone who wants to study it.

Dr Saeed Khawar Bhutta in his paper narrated the sad tale of how Punjab was made illiterate by the British after 1849. "The British proclaimed that anyone who surrenders a gun will be rewarded with two annas, while the one who surrenders a Punjabi Qaeda will be given six annas for the same act." Dr Bhutta quoted from the G.W. Leitner’s report on indigenous education system in Punjab that gives the story of how Punjab was made illiterate almost overnight with merely a stroke of pen; and Punjabi was detached from the market economy.

Alien languages were imposed deliberately on Punjab and it became a unique case as in other countries the language of majority dominates the languages of minorities but in Punjab "the river flows upstream". Dr Bhutta considers language not merely a tool of expressing thoughts but also a medium of transmitting treasures of folk wisdom. He highlighted that "language is a fundamental right and the destruction of a language is essentially a political agenda to push back the local culture and language." This agenda needs to be resisted because Punjabi is being excluded in its own land.

Beautiful local words are being replaced with alien words and the bitter truth is that the public itself becomes complicit in this. Since all local languages, including Punjabi, are against sectarianism, and the elimination of these languages from our education system has negatively contributed towards an enhanced level of sectarianism in our society. Resuming the teaching of Punjabi and other indigenous languages will improve toleration and harmony as promoted by our folk literature.

Dr Zaheer Wattoo, another outstanding scholar of Punjabi from GC University, Lahore, made a brilliant presentation on the post-colonial Punjabi literature. He started off by reminding the audience that "every occupation leaves some footprints that are traceable in the form of social, cultural, and linguistic distortion of the affected land." The colonisers tend to enforce their accepted reality with coercion, and that’s what they did in Punjab following the accord of Amritsar in 1809. After the complete occupation of Punjab in 1849 they used tools such as faulty settlements of land, and enforcement of anti-people laws.

Dr Zaheer Wattoo explained how efforts were also made to distort the linguistic fabric leading to alienation of the people from their roots leaving behind only a hyper-reality. This hyper-reality makes people alien to their own original reality. He quoted ample examples to prove that Punjabi literature testifies to this alienation, coercion and detachment.

Another excellent paper was presented by Dr Faisal Jappa from Government College, Chiniot. His presentation focused on the impact of the Second World War on Punjabi Mahiya. He has painstakingly collected examples from the folk songs of the early 20th century that narrated and reflected the jubilance and pangs of pain that Punjabi people went through before, during and after the War. Mahiya was a popular genre of expression that embodied the emotions of the masses. Dr Faisal Jappa analysed the composition of Mahiyas as historical representation of events that no other historian could portray.

The Punjabi Mahiya of the first two decades of the 20th century grasped in its tones the agony of the War as it unfolded. The Mahiyas also covered the emotions of love and hate in the young men and women of Punjab who were directly affected by the wars and how deeper social values were torn asunder when hundreds of thousands recruits were mobilised and sent to fight in Europe. The Mahiyas compiled and presented by Dr Jappa show the level of hatred of Punjabis for the British and German armed forces.

From the University of Bath, UK, Dr Wali Aslam, professor in international relations, came to present his project that deals with the socio-cultural identity of Punjab and the concept of misplaced regions. He began by highlighting that Pakistan in general, and Punjab in particular, have seen a wave of Arabisation since the 1970s. This phenomenon travelled both ways -- bottom-up and top-down -- and has had a profound impact especially on Punjabi culture and identity. He talked about the tendency among the masses in the region to associate themselves less with the region’s ancient Indian heritage and more with the socio-cultural practices of the Arabian Peninsula.

Dr Wali Aslam argued that the Pakistani Punjab appears to be misplaced in the subcontinent, as most Punjabis do not consider themselves to be part of the Indian civilisation. Those observing from the outside also cannot recognize Pakistani Punjab’s contemporary socio-cultural landscape that might be reminiscent of the Punjab as it was. He articulated the concept of ‘misplaced region’ that seeks cognitive home elsewhere despite being situated in a specific area geographically.

But, perhaps the most educative and informative talk was delivered by well-known Punjabi writer, Nain Sukh, who described in detail how Ranjit Singh established Punjab as an independent country in 1799. He said it was wrong to describe the 50 years of Punjab prior to the British occupation as Sikha Shahi, as it was a secular kingdom in its orientation. For the first time in Punjab’s history even the low-caste Punjabis played an important role. But after the British occupation, there was a rush to change genealogy as many wanted to take advantage of the changed situation. Nain Sukh lamented the lost history of the lower caste Punjabis who suffered at the hands of the Afghans and the British who changed their castes and their stories.

Prof Zubair Ahmad from Islamia College, Lahore, talked about the Qissa and the Sufi tradition in Punjabi. He began with Damodar Das (1560 - 1630) who was the first Punjabi poet to write the Qissa of Heer Ranjha. Punjab had seen two indispensable Punjabi poets Baba Fareed (1173 - 1265) and Baba Nanak (1469 - 1539). Baba Fareed belonged to the Chishti school of Sufi thought, making his poetry a part of the Sufi tradition. Prof Zubair delved into the origins of Sufism as an Arabic-Persian tradition that had a wider meaning encompassing all.

One cannot talk about Sufism without indulging in the discussion of Wahdatul Wujood (unity in being) arguably initiated by Ibne Arabi and Mansur Hallaj. Prof Zubair Ahmad was rich in his description of Chishti, Naqshbandi, Qadri, and Suhrawardy traditions that were mixed with the folk traditions of Punjab resulting in an inspiring new literature.