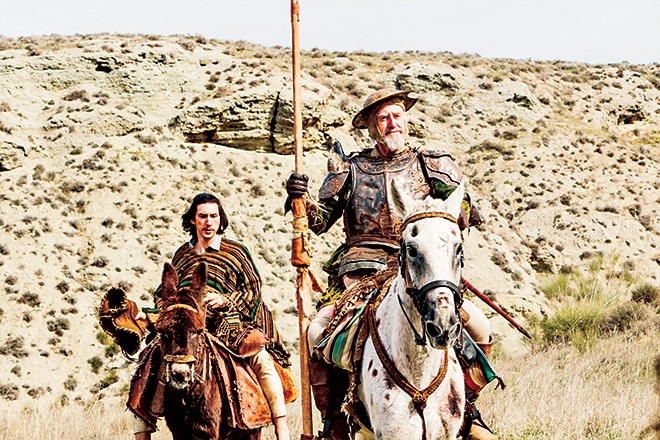 It’s been plagued by endless delays, natural disasters, dying actors, greedy financiers and good old-fashioned Icarus-level hubris. It’s been called one of the most cursed film productions ever.
Most folks assumed that Terry Gilliam’s Don Quixote project would never, ever be made, much less see the light of day. This demographic included the director himself. And, having finally slouched its way to completion and a contested premiere at Cannes in 2018, The Man Who Killed Don Quixote knows that an against-the-odds backstory is as much a marketing tool as a millstone around its neck.

"And now … after 25 years in the making … and unmaking," declares an introductory disclaimer; rather than deny its storied stop-start-stop-again history, it leans in hard to acknowledge the unlikeliness of it all. That opening statement is a victory lap. Its existence at all is a bona fide miracle. Now comes the hard part: The damn thing has to stand on its own and simply work as a movie.

Which makes us the messengers, i.e. the ones who have a nagging tendency to get shot. Not surprisingly, after a quarter century of revisions and musical-chair casting games and so much chasing of imaginary giants, the end result is messy, ragged, uneven, all over the place. There are exchanges that feel baked to a crisp followed by sequences that feel slightly undercooked. But it’s also the single best Gilliam film to hit theaters in 20 years, and while that’s admittedly not a high bar to clear -- us fans have had to put up with works ranging from highly compromised to cringeworthy -- it should be considered a major cause for celebration. Rather than adapt Cervantes’ story, the Monty Python alumni and cinefantasist has used it as the starting point for a riff on artists haunted by the ghosts of earlier works and an old man stuck pursuing an impossible dream. We expected a pet project, just not such a personal one.

The artist is Toby Grisoni (Adam Driver) -- no relation to co-writer Tony Grisoni, but probable superego relation to the movie’s other creator with the same initials -- a filmmaker trying to stage his own When-Don-Met-Sancho epic. Nothing is going right, from the stunt co-ordination to the communication between American and Spanish crew members. Toby himself is a bit of a Hollywood blowhard, bellowing insults into a cell phone and barking orders. Then, one evening at dinner, a mysterious Romani man comes bearing bootleg DVDS. Nestled in between the blockbusters happens to be the young director’s student film, a Quixote tale in miniature starring nonprofessional locals that he shot nearby a decade ago. So he heads to the village where he once coerced Javier, (Jonathan Pryce), a shoemaker, into playing the crazy knight errant and convinced Angelica (Joana Ribeiro), a tavern waitress, that she could be a star. Upon arriving, Toby discovers that his actress has long since fled to Madrid. As for his lead? He still believes he’s Quixote, destined to keep chivalry safe one tilted windmill at a time.

Let the misadventures begin! Gilliam sends his delusional knight and the confused cineaste, who Javier/Don keeps mistaking for his sidekick, into situations that require the defense of honor and the suspension of disbelief. Some are topical, such as a squatters’ encampment that’s giving sanctuary to refugees; eventually, Spanish "inquisitors" show up, which no one was expecting. Some are surreal, like the set piece involving a horse’s corpse, a hidden paradise and a bathing beauty … who happens to be Angelica. There are sword attacks on cop cars and costume parties run by Russian oligarchs, a flock of sheep that Quixote mistakes for holy men and a sleazy European producer (Stellan Skarsgård) subbing in for every money man that’s ever screwed Gilliam over. As for the grotesque creatures running toward Toby from across the horizon? They might be giants.

That shot of a trio of ogre-like men filmed from below feels like the one main holdover from Quixotes past, such as the aborted attempt chronicled in the 2002 documentary Lost in La Mancha. Occasionally, Gilliam lards The Man Who Killed Don Quixote with references to his own finished works, from a line suggesting an armored rival (cue Holy Grail flashbacks) to a humiliating prank that brings to mind The Fisher King‘s Red Knight nightmares. The man loves his beautiful dreamers, as anyone who’s seen Brazil a dozen or more times can attest. His usual visual flourishes -- all those warped wide-lens shots and cluttered set designs -- are here, though they are doled out sparingly for once; what’s most shocking is how muted things seem for a Gilliam joint, even with the black-and-white student movie bits and the climax’s bric-a-brac-filled set piece. Females, in the form of the boss’s wife Jacqui (Olga Kurylenko) and Angelica, represent the siren song of Hollywood and artistry sacrificed on the altar of commerce, respectively. It have been nice if they’d been actual characters, too.

Even Pryce’s dotty old Don sometimes comes off like a raw sketch of someone under the grip of method acting run amuck rather than some sort of divine madness, which says less about the veteran stage actor’s chops than it does Quixote’s role being more of a mere Catalonian catalyst. For Gilliam, it’s all about the filmmakers, both the ones in front of and behind the camera. He’s much more interested in Toby’s journey to scratch some existential itch, which, lucky for him, is Adam Driver’s specialty. The actor has been killing it lately -- we’re still thinking about his BlacKkKlansman turn almost a year later -- and this performance extends his winning streak. He can do sublime or ridiculous, or in the case of an impromptu Eddie Cantor impersonation to prove he’s not an Sancho Panza impostor (long story), both at once. Driver is the anchor the film needs from turning into nothing but a flight of fancy, though given what the director is after, i.e. following Quixote 1.0’s narrative of holy fools chasing after ideals and ghosts, such flights make sense here.

Gilliam has said that every time he was working on something else over the years, he knew that the tale of the knight errant was waiting for him around the corner. And now that this decades-in-the-"unmaking" project has been committed to film and finally laid to rest, he would miss having that unbeatable for to fight. What he does have, however, is a tangled yet touching story of needing "giants" to fight before one goes off to meet the Great Cervantes in the Sky. The movie nearly killed him. Yet the victory isn’t just that he finished it, but that he’s fashioned something so magnificent in its messiness. He should be proud as well as relieved. The impossible dream is dead. But long live The Man Who Killed Don Quixote.