The complexity of Hazara killing 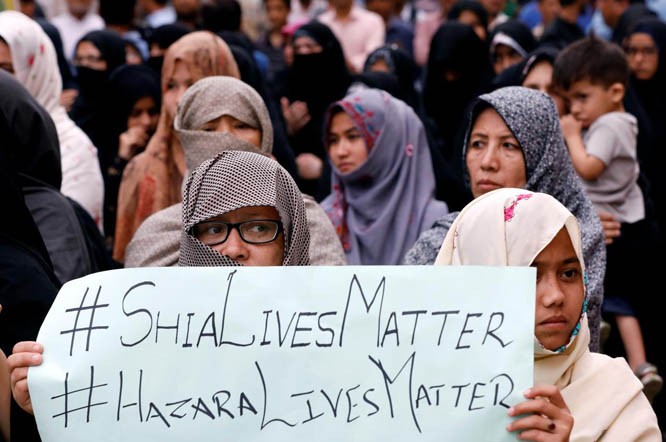 In the wake of suicide attack that targeted Shia Hazara ethnicity, political pundits tried to fix the responsibility for failure to eliminate terrorist violence. A stock response was that it was the state’s creation and use of proxies that have boomeranged on us.

This was something Prime minister Imran Khan said on April 8 when he was speaking to a group of foreign journalists in Islamabad. "We have decided, for the future of our country -- forget the outside pressure -- we will not allow armed militias to operate anymore," the prime minister was quoted to have said. He was definitely referring to the US and Pakistan’s role in the creation and supporting of mujahideen back in 1980s. Obviously, the state has had an overarching role in sustaining the militant infrastructure in the country even after the humiliating eviction of Soviets from Afghanistan.

After the latest suicide attack targeting Hazaras killed no less than 20 people, Hazara leaders and activists pointed the finger at state failure to provide security of life for the beleaguered ethnicity in Quetta city. Even beyond the Hazara ethnicity, one finds much support, from across the ethnic spectrum of Baloch, Hazara and Pashtun, to the viewpoint that Hazara killing is primarily due to state’s appeasement or acquiescence or at least failure to rein in militants. Within the Hazara ethnicity, people also employ a different argument.

There is no shortage of those people who hold the opinion within the ethnicity that Hazara killing is the outcome of the incessant proxy war between Iran and Saudi Arabia. Those who subscribe to this opinion point to the alleged sponsoring of sectarian madrassahs by donations from Saudi Arabia and Iran. Although no one can deny the veracity of both arguments, of state role and regional state involvement in stoking sectarian strife in Quetta city, both hypotheses can only help explain part of the otherwise complex phenomenon of sectarian violence.

Even if, hypothetically speaking, the state genuinely abandons supporting and pampering militant outfits and regional support to sectarian organisation ceases to exist, will killing in the name of sect peter out any time soon? The answer is in the negative.

Here comes into play the role of domestic support base of sectarian organisations, madrassahs and political parties. Hate along sectarian fault lines have built and sustained its own momentum. Madrassahs across both side of the Shia-Sunni sectarian divide provide theological and sectarian underpinnings of vitriol. They impart religion education couched in typical sectarian imagery which has very little, if any, space to entertain any different interpretation of religion. These madrassahs have very local sources of funding. The organisers of madrassahs have established strong connections from within the communities they serve.

Similarly, sectarian political parties have ideologically committed following from across the Shia-Sunni sectarian divide. Sectarian mullahs see Shia Hazara through the prism of Iran. Within the Sunni sectarian jargon, Shia Hazaras are billed as Iranian agents. At times, Sunni sectarian mullahs from a sectarian political party have publically condemned Shia outside the pale of Islam in public gatherings in Quetta city. The terrorist Islamic State claimed responsibility for the suicide attack. In reality, the terrorist attack could never have been possible without local support.

Policy makers should publically admit the failure to provide security which is the state’s raison d’être. They should also admit that they are primarily responsible for the mess we are in.

Aside from religious organisations, madrassahs and people associated thereof, the accusation of inclination towards Iran hardly carries any weight. The secular and nationalist Hazara Democratic Party (HDP) detests any kind of Iranian religious and sectarian influence among the Hazaras. HDP is a kind of bulwark against unsavoury Iranian leverage. The party has huge following within the Hazara ethnicity. It has two lawmakers in the current Provincial Assembly of Balochistan. They are Abdul Khaliq Hazara, the party’s chairman, and Qadir Ali, elected from PB-27 Quetta-IV and PB-26 Quetta-III respectively.

The final showdown with unyielding protesters led to the government assurance that NAP will be implemented in letter and spirit. The Hazara protesters called off the sit-in on April 15, Monday night, after the former Minister of State for Interior, Shehryar Afridi, held successful negotiations with them. This is a temporary respite for the government. Sunni sectarian mullahs interpret conciliatory moves as the state’s capitulation to Shias. The narrative Sunni sectarian mullahs have been selling is that Pakistan is a Sunni state where Shias have very little, if any, place. What should be the state response to militant sectarianism?

The good news is that there is a growing realisation within the policymaking circles that religious violent extremism is a grave issue. The worrying news is the state is yet to deliver substantially. The government should not evoke unrealistic expectations of the public by promising that no terrorist incident will ever happen again.

The first step should be to reinstate the trust of public. Policy makers should publically admit the failure to provide security which is the state’s raison d’être. They should also admit that they are primarily responsible for the mess we are in and they should show that they are genuinely concerned about the wellbeing of the citizenry. Implementing the nearly consensus National Action Plan will serve as a good starting point.

The complexity of Hazara killing