Once a colourful event, kite flying has now turned into something that can only be taken up in the dark of the night 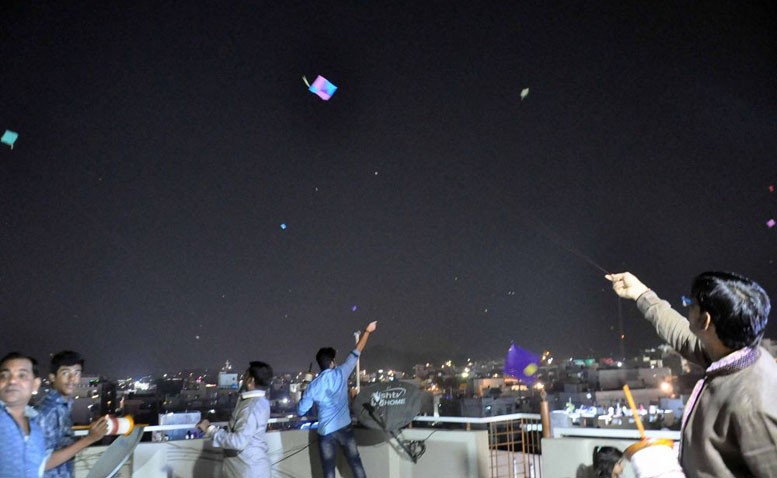 It is not unusual to hear lovers of kite flying talk about arranging ‘safe and secure’ places for a thing as beautiful and traditional as kite flying. Once a colourful sport, kite flying has now turned into something that can only be taken up in the dark of the night, away from city limits at places where police raids and arrests can be avoided.

Shahid Malik who is an ardent kite flyer experiences this on a regular basis. "Once an influential friend of mine had arranged a kite flying competition at a farmhouse." Malik says that he, along with his companions, "travelled around ten kilometres on a muddy track along the River Ravi only to be able to avoid main roads." "Kite flying competitions have been a norm in the outskirts of the city," he reminisces. "Ever since kite flying got banned, nothing really changed for hardcore lovers of the sport except for costs that have increased considerably; and the gaming hours, which have shifted from morning to night. Another thing that has changed is the colour of the kites which is mainly white so that it can be seen at night.

"Initially people could easily indulge in kite flying at night on their own rooftops but ever since the police started conducting raids and arrests, the activity turned into a secret show, which is now only organised for special groups," says Mustafa, a student of University of Management Technology (UMT). He says he knows this as he also planned two or three such events at one point in time for which he had to make ‘special’ arrangements. "Mobile phones are not allowed in these events," he says, "this is usually done to avoid photographs and videos getting viral on social media."

He says initially participants are given an address to reach at, from where they are then transported to a hidden location that no one is aware of. These measures are undertaken mainly to avoid police raids. Some thrill seekers actually find joy in the underground nature of this activity. "I love the mysterious way of participating in a kite flying event," says Hashim, a young government employee. "Kite flying has been my hobby for a long time but now I have to do it in secret, which is thrilling in a way," he chuckles.

Just like the activity itself, the sale and purchase of kites has also become a secret endeavour in many ways. There are some people who’re conducting online kite selling businesses, where customers just transfer money online and the kites are delivered to them in complete secrecy.

Just like the activity itself, the sale and purchase of kites has also become a ‘secret’ endeavour. There are some people who’re running online kite selling businesses, where customers just transfer money virtually and the kites are delivered to them in complete secrecy. However, online sales always bring with them their own issues. Some sellers deliver substandard material, whereas some report their customers to law enforcers. Many policemen also try to nab online sellers by disguising themselves as bonafide kite flyers.

Usman, another professional kite flyer says that he plans kite flying events in small cities where police are not really bothered about the activity. He says in some cases the activity is organised at the dera of a local influential so police not only give unofficial protection but also enjoy the show.

Syed Mubashar Hussain, PRO Lahore Police (Operations Wing) claims that the police face a number of issues while dealing with kite flyers. He says that raiding someone’s home at night is difficult as local residents make it an issue of chaadar and chardiwari, furthermore, kite flyers destroy or throw away their kites as soon as the police even try to conduct a raid.

"Lahore police have constituted a special squad which is dedicated to spotting and eliminating night kite flying," he says. "Since January 1, 2019, Lahore police have registered some 2,810 cases, arresting 3,012 kite flyers and recovering over 30,000 kites and twines," he continues.

He says that selling kites and twines on social media comes into the ambit of Federal Investigation Agency (FIA) as it is a cybercrime adding that the "Lahore police has intimidated FIA about this crime and now it is their job to take action."