Are the PTI and establishment looking in different directions? The PPP hopes so 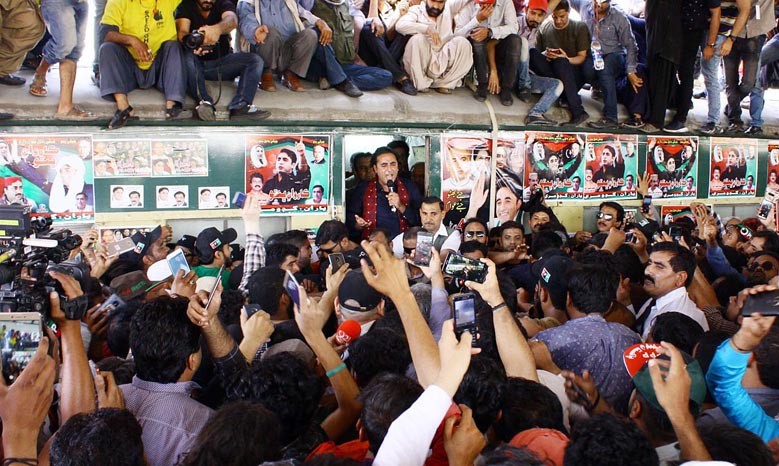 On March 26, PPP Chairman Bilawal Bhutto Zardari addressed a sizeable number of people who had come to see him off on his Train March at Karachi’s Cantt Station. The PPP chief used his ‘lethal weapon’ -- the grievances of Sindh against Islamabad.

Seemingly, Bilawal Bhutto’s aim was to mobilise the people for Z. A Bhutto’s death anniversary but this was not the only objective. In fact, PPP’s march was a reaction to a big game that the party believes it is being pulled into. "Now the game is no more a secret" says, Shahab Usto, a senior analyst.

This hurriedly-launched movement by Pakistan’s largest political party of yesteryears was a result of the intense heat that the party felt as cases were opened against its supremo, Asif Ali Zardari and his sister Faryal Talpur. PPP leaders believe the Pakistan Tehreek-e-Insaf (PTI) government is targeting opposition parties to divert their attention from the poor state of the national economy.

PPP leaders are not alone in this observation. Even many PTI leaders based in Karachi and the rest of the province believe so. "Since the PTI government has failed to put the economy on the right track, the common people are suffering," says Jamil Ahmed Khan, former ambassador to Libya and UAE, who joined the ruling party two years ago.

"God knows how people will survive this worst form of poverty. The PTI government has lost its sense of direction completely," he observes.

Imran Khan’s drive against corruption, he believes, is the real cause of difficulties the national economy is facing at the moment.

"It synchronizes with the objective of a plot aimed at defaming opposition parties--mainly the PPP and the PMLN. But it is not working," says Usto, adding, "The economy is not improving and the recent shocks --devaluation of the rupee, rise in fuel prices and consequent inflation -- have affected the common people badly."

Interestingly enough, this situation has brought equal dividends for both sides -- the PTI government as well as the opposition parties. The more the economic difficulties increase the more the PTI campaign gets impetus against corruption which, in other words, puts a greater burden on the opposition.

Simultaneously, the more pinch the opposition feels the more space it gets against the government. The PPP has an advantage of having the government in Sindh and, thus, it is in a favourable position to draw crowds like it did in Ghotki where Imran Khan claimed his party has broken the monopoly of the PPP.

"The PTI government’s agreement with the IMF would make life tougher for people due to the conditions attached with the agreement. It will give yet another opportunity to the opposition to grab more space," says Khalid Chandio, an analyst from Bhutto’s hometown, Larkana. However, some PPP insiders differ with Chandio. They say it depends on how fast the government moves against Zardari and his coterie.

Would sending Zardari behind bars work? "Yes, if the PTI needs a huge distraction, that cannot be ruled out in the next few months," says a PPP worker who was in Bilawal’s Train March from Karachi to Larkana.

Would the PTI do that? It is less likely. "If it suits the real powers in Pakistan is yet to be seen. I think they would not go too far," says Usto.

Preempting such a situation, the PPP has been making a case over the last many months warning that Islamabad is bent upon eliminating provincial autonomy that it won through the 18th Amendment. Sindh is truly a concerned province where even some opponents of the PPP remain ready to oppose any move against the devolution of power in Pakistan.

Moreover, any talk about replacing the parliamentary form of government with the presidential one strengthens the PPP which uses it as an effective tool.

When the Sindh Assembly adopts a resolution against any moves to tamper with the geographical unity of Sindh and Zardari vows to resist the presidential form of government, the PPP secures itself in the heartland of its constituency. Also, it affects the very inroads that the PTI government is trying to make in this province.

The PTI’s drive against corruption and inability to deliver on the economic front has sent bad signals to the powers-that-be.

"Punjab, the bastion of ‘power’ has seen Sharif’s team back in the bureaucracy, giving the impression that the Buzdar government failed to do well in the province. It strengthens another opposition party -- the PMLN in Punjab," he says.

The PPP knows very well how the PMLN has succeeded in receiving relief which it believes will finally be given to Zardari too.