The resolve of the Pashtun women

Pashtun women came out on roads to participate in the women march last month to emphasise the issues that women are facing at the grass root level, especially in KP and erstwhile FATA 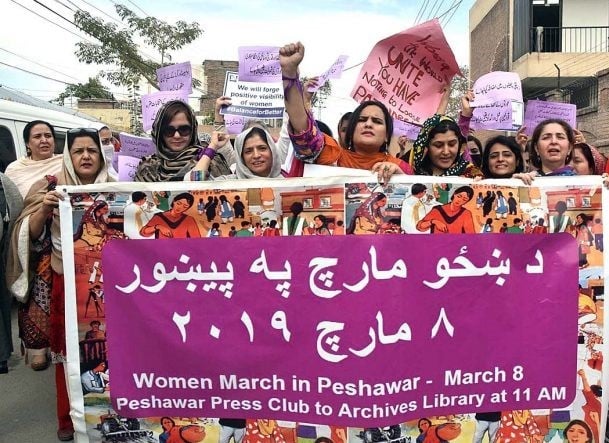 When women in Peshawar got the news of Women March on ‘International Women’s Day’ from other women on social media, they decided to be a part of it. The Women March, beginning from Hyderabad via Karachi to Lahore and Islamabad, also encouraged women in Peshawar and they urged each other to be a part of it. There was no banner and no organisation to support it but still women were calling on each other with the expectation of presence of a few women. However, they were surprised to see a large crowd of women from different backgrounds gathering at Press Club Peshawar the next day.

Pashtun women came out on roads for the march to emphasise the issues that women are facing at the grassroot level, especially in KP and erstwhile FATA. Pashtun women, who are already a victim of patriarchy and poverty for centuries, are burdened with additional traumas caused by terrorism and the war on terror.

Pashtun women are facing issues which are much more serious than the issues faced by women in the rest of the country and they need serious attention. These issues include patriarchy, poverty and terrorism. They are victims of inhuman customary practices called Riwaj and Swara (forced or compensation marriage to solve a fued), Walwar or Rasnama (a bride price), Ghag (men’s uproar to claim/occupy a woman for marriage without her consent), honour killing to protect the man’s Nang (honour), Miratah (woman without a male member like husband, son, brother or father, etc, so her property is distributed amongst other men of the family).

The financial problems of a Pashtun woman are not addressed who don’t get her inheritance or dowry rights given by the constitution and Islam, especially tribal women who are kept deprived of inheritance in another form called Shamilat (The joint owned property) which is distributed only among men through a custom called Wesh (Distribution). These are some of the core patriarchal practices which are unconstitutional but are still faced by Pashtun women.

There are many other patriarchal issues which are unconstitutional as well but are still in practice like forced marriage and barriers to girls’ education, right to work, right to vote and right to contest election. Representation of Pashtun women in parliament and all forums of decision-making process should be ensured.

Pashtun women need special attention of policy makers and should be kept out of the crowd who are facing patriarchal issues and poverty because they are facing the added burden of trouble caused by terrorism and war on terror for more than a decade. They became widows, orphans and disabled, they were forced to leave their home and became ‘Internally Displaced Persons’ (IDPs). This women march was a great opportunity to bring forth all these issues to the world.

‘Women March’ was an opportunity to draw the attention of policy makers and the whole world towards these issues.

The resolve of the Pashtun women