Paving their Own Path

The children of Veerju Goth, a small Hindu-majority village in Sindh are striding towards better health and education, thanks to two private initiatives 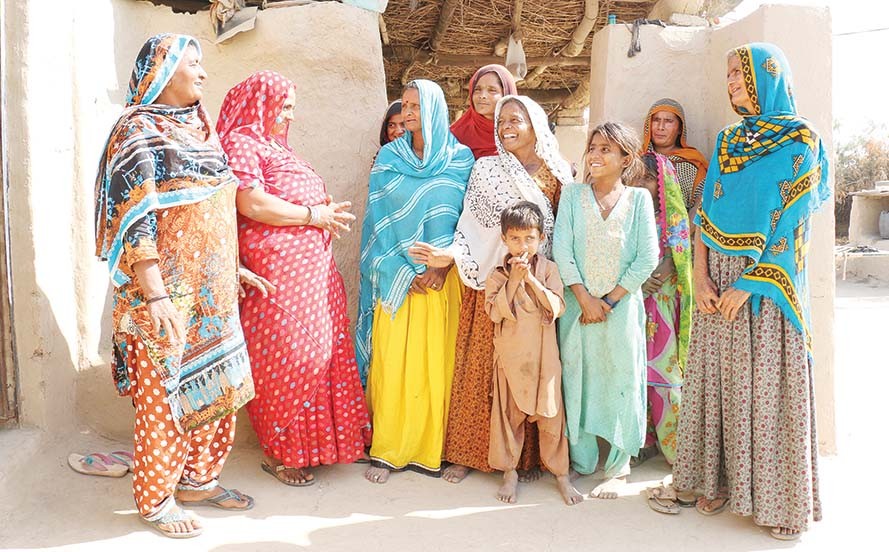 In a small Hindu village of Sindh, Veerjo Goth, all children above five years of age were assigned a unique duty by their parents. As soon as someone from the village saw a team from the district healthcare services arrive at the village to administer polio drops or give immunisation injections to children, the older children were tasked to spirit away their younger siblings and neighbours into the fields, outside the village settlement limits. This imitation of the Pied Piper fable was enacted so that people could pretend they did not have children, or that they weren’t presently available to be immunised.

Since the immunisation teams already operated with limited resources, time being one of them, they would leave without doing their job. The children would then emerge from the fields and other hiding places, laughing and rejoicing at having avoided being poked by needles. For them, it was a game. They would go back to playing in their streets, barefoot and unshielded against micro-enemies that were hidden from plain sight and only made their presence known in the most troubling ways, one of which was polio. For their parents, the connection between ailment and immunization was never truly made clear. Misinformation ruled and so they remained unconvinced, taking news of a polio case or other preventable childhood ailments as a punishment from God. They couldn’t even pronounce names such as diphtheria, hepatitis, measles, mumps, pertussis (whooping cough), pneumococcal disease, rubella, rotavirus, and chickenpox. They only knew immunization caused either physical and mental disability or sterilization, and so the tableau continued.

That is, until a local woman activist named Maria stood up against, what she calls, nonsense.

"We laugh about it now, older children with a smaller child under each arm, running away to hide, but back then it was no joke," Maria says as she sits in a baked mud hut being used as a community meeting space. "We were unaware of what we were doing to our children by refusing to get them immunised. Add to it the lack of sanitation, hygiene, and education in the area and what we had was a tangled mass of problems."

The mass of problems would have gone unsolved if it hadn’t been for an initiative that was set up by the EU-funded Sindh Union Council and Community Economic Strengthening and Support (SUCCESS) programme in partnership with NRSP in the Tando Muhammad Khan district. Maria was one of the first women to be trained by the SUCCESS team under the larger categories of water, immunization, sanitation and education and became a part of the village and community organizations set up by them. Since SUCCESS is a women-led initiative, she recalls the first few attempts at involving the community finding resistance from local men. The women of the predominantly Hindu village proved to be better students and leaders and banded together to convince their male family members about the importance of clean water, personal hygiene, the importance of immunization especially against the crippling lifelong effects of polio and the need for education.

"It took a little more convincing with the children," laughs Maria, who is beloved as a communal aunt by young and old alike. "They had been free to do as they please and now we were telling them to drink polio drops, get injections, wash their hands and sit down for studying. We had a bigger battle with the little ones but in the end the mothers won."

Maria and her comrades are proud Hindu Sindhi Pakistani women and identify as such with unwavering pride. They always start their meetings with soulful renditions of prayers in Sanskrit and end them with a combined slogan of jiye Sindh, jiye Pakistan. Before their trainings under SUCCESS, they existed in a near vacuum where many of the provincial level reforms did not entirely reach them. The villagers adhered to a way of life inherited by ancestors who had been farmers and day-labourers, engaged in daily tasks that did not transcend into any revolutionary acts. Now, they have been given a chance to learn and implement their learning as they see fit in their communities while also being held responsible for better outcomes in their assigned areas. The zeal to make things better is palpable.

"I had to drink polio drops myself to prove to my neighbours that they are harmless! With polio drops, injections and sanitation, the children felt better for longer," adds Maria. "That’s when we sought ways of educating the children and a SABAQ Center was opened in our village."

Previously, children had to walk at least ten kilometers to go to a local government school where the teacher was often absent. Boys would use this opportunity to play and loiter, but for girls, it was a hassle that soon resulted in them dropping out of the school altogether. Many parents did not send their children to school at all on account of it being too far. Again, girls suffered the most. Most mothers were convinced of the value of education but the distance and uncertainty made them decide against sending their children so far every day.

SABAQ is an educational technology company that leverages technology to create access to education in communities that have been largely overlooked. With NRSP support, a center was initiated a year ago in the village.

"We work in communities that have no or inactive schools within a radius of .75 km and at least 40 children currently not attending schools. These communities were not just at the bottom of the pyramid but also predominantly a religious minority," says Hassan Bin Rizwan, Co-founder & CEO of SABAQ. "Being an Education Technology company, application of our digital learning solution in rural community education centers was essential to demonstrate how innovative solutions are much-needed to tackle the challenge of 22.6 million out of school children."

Each center is provided with 8 tablets that come pre-loaded with content in science, mathematics and language. Three students share one tablet to foster peer-to-peer learning. Since internet is not available everywhere, the content can also be used offline.

"We train the community educators (who we call facilitators) and provide them with support materials, such as lesson plans," informs Hassan. 40 children from Veerjo Goth are being educated at one of the 125 SABAQ Centers operational in districts of Tando Muhammad Khan, Tando Allahyar and Mirpurkhas.

"The name of our flagship product is Muse. Muse turns rigorous, curriculum-aligned, primary-grade lessons in a fun and engaging animated format that ignites kids’ passion for learning."

The story-based and situation-based lessons have exercises and grade-appropriate digital interactive flipbooks in the package and the children of Veerjo Goth are enjoying this change from blackboard and chalk-based lessons. Maria has never met Hassan but she appreciates the SABAQ center that has removed roadblocks for the community regarding lack of educational facilities in the area. Although SABAQ center only caters to children from grades KG to five, Maria is hopeful that with added confidence of healthy, educated children, her fellow women will further fight for them to seek higher education.

"If we can learn our lesson about not hiding our children from injections, we can surely learn how to seek ways to get them further education," says Maria.

The path to change is never easy and has many detours and detractors. For Maria and her comrades, they have mastered the art of rising above it all.

Paving their Own Path