The Aurat after the march

As long as women continue to die in suffering, the marches on the street will continue. As long as they are forced to accept, the outrage will happen. The debate isn’t over yet 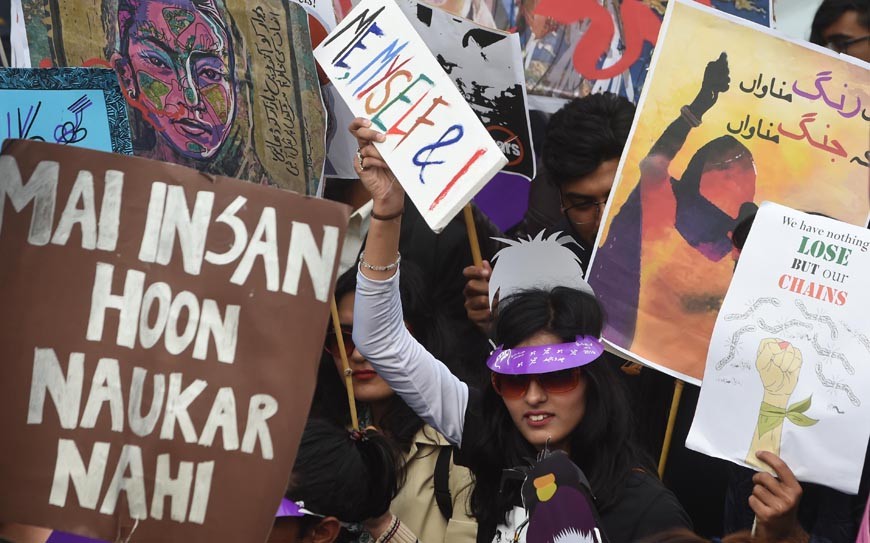 Two women are murdered by their husbands; one over domestic violence and another over a cold dinner. A woman is burnt alive by her in laws. Another is stripped naked and has her head shaved by her husband and his friends, as she refused to comply with their wish of dancing in front of them. Even more, women from the minorities are reported to be kidnapped and forcibly converted. A handful of reported events reiterate the issues highlighted in Aurat March. The debate isn’t over yet.

Rallies, street processions, angry protests are a norm in Pakistan. Day after day, some dejected at work, others with lives or faiths threatened, march on the roads, chanting angrily and demanding justice. Women are no exception, except the fact that their voices are often sympathised with, nodded at and then forgotten about. In that sense, this year’s Women’s Day rally was phenomenal. The Aurat in her March was bold and had no time or botheration for subtleties. Her demands were clear, words were fiery and voice was loud. And so was the criticism. But as the hot conversations still continue on social media between the two camps; one siding with the feminists and the other challenging it, the ruthless passage of time is bent to prove that the woman is still suffering, hurt and fighting for answers.

We proudly claim legislation against all forms of violence and yet, domestic violence continues to take its toll on the lives of women. We preach morals to women and in contrast, hear of immoral obligations forced upon them by their husbands. We recite lessons of tolerance in our religion and still, show extremes of intolerance towards those who belong to other faiths. And since a woman is somehow physically weak and mentally evolved to believe that she does not possess any strength, she often becomes a victim of force. She is forced to leave her home, is forced to suffer animal instincts of a man and is forced to give up her faith just because she is a woman.

Is it a sad consolation that we see women in other parts of the world suffering similar fates? If we look at nations with similar struggles and similar heritages, the stories are also, to a large extent, strangely alike.

A prominent Iranian human rights lawyer and women’s rights defender Nasrin Sotoudeh is sentenced to 33 years in prison and 148 lashes for her human rights work, including her defence of women protesting against Iran’s hijab (veiling) laws. The Amnesty International has labelled this to be an "an outrageous injustice". The World Economic Forum’s 2017 Global Gender Gap Report has already ranked Iran 140 out of 144 countries for gender parity, with women in Iran constituting only19 percent of the workforce in 2017, showing 7 percent growth since 1990.

In Saudi Arabia, activists are still fighting the male guardianship laws, according to which women are forbidden from traveling, conducting official business or undergoing certain medical procedures without permission from their male guardians.

In 2015, the Saudi government launched the Absher app hosted on Google Play and Apple App store. It lets men track women and allow or prohibit them to travel through airports. This year, Absher received a severe backlash and demands of removal from app stores by human rights organisations, calling it a "patriarchal weapon". However, Google refused to remove the app, citing that it doesn’t violate the company’s terms and conditions.

Rallies are a norm in Pakistan. Day after day, some dejected at work, others with lives or faiths threatened, march on the roads, chanting angrily and demanding justice. Women are no exception, except the fact that their voices are often sympathised with, nodded at and then forgotten about.

According to estimates, more than 1,000 women try to flee Saudi Arabia every year, but text alerts, sent by Saudi authorities enable many guardians to ‘catch’ women before they actually escape. Bethany Vierra, a 31-year-old American woman is the latest victim of the male guardianship system, trapped in Saudi Arabia with her 4-year-old daughter despite a divorce from her Saudi husband.

In recent news, women activists on trial in Saudi Arabia told a court they had been subjected to torture during more than nine months of detention. The abuse included electric shocks, flogging and sexual assault.

In Afghanistan, Global Rights estimates that almost 90 percent of women experience physical abuse, sexual abuse, psychological abuse or forced marriage. The perpetrators of these crimes are usually the families of the victim.

In essence, women around the world are still struggling for their basic rights. It is an irony when it comes to Muslim women because they have been given many liberties in their religion, but sadly, still remain victim to culture. Their role and privileges in life are still misunderstood by the followers of their religion, and thus, by the world.

The Aurat in Pakistan, though progressing, is at the same time, still surrounded and suffocated by patriarchy. The influence of social media helped the latest victim, a wife stripped and thrashed for refusing to comply with her husband’s outrageous and insulting desire and the man is now behind bars. But will this also help change the mindset of his and other men like him? Will the action force him or teach him to respect women? If words of illiterate preachers are strong enough to convince men to lay their lives on the path of ‘righteousness’, can we have a saner and wiser teacher, who can inculcate some morals in manhood?

Awareness of human rights and also those for women is increasing, but the campaigns seem to fall on deaf ears when it comes to those in laws who burn someone’s daughter. They are certainly not heard by the man who resorts to violence over a cold dinner. They are, sadly, not heard by those parents, who force the decision of marriage or the limit of education on their daughters, thinking that it is for the better.

But the campaigns are heard by daughters, wives and mothers. Their voices in reply are subdued and suffocated from complying with tradition and keeping their heads bowed. It is only when they are enlightened and strengthened from within, do they lift their heads and reveal their true identity.

If a woman succumbs to societal pressure and quietly bears it all, it does not mean that she approves of the fact that many others in her life are making decisions for her. But then, today there are many women who refuse to comply. They also have no qualms about expressing their disapproval and demanding fair play. To expect that they accept traditions which harm them, and refrain from giving their opinions, is surely asking for a lot. The outcome is a burst of expressions, free from bondages of moral obligations.

A global Women, Peace and Security index ranks Pakistan among the five worst countries for women in the world -- better slightly than Afghanistan and behind Saudi Arabia and Iran. As long as women continue to die in suffering, the marches on the streets of this country will continue. As long as they are forced to accept, the outrage will happen. The debate isn’t over yet.

The Aurat after the march