The endgame of a dictator

A spotlight on major parties, players and points of contention that led to Gen Ayub Khan’s downfall in March 1969 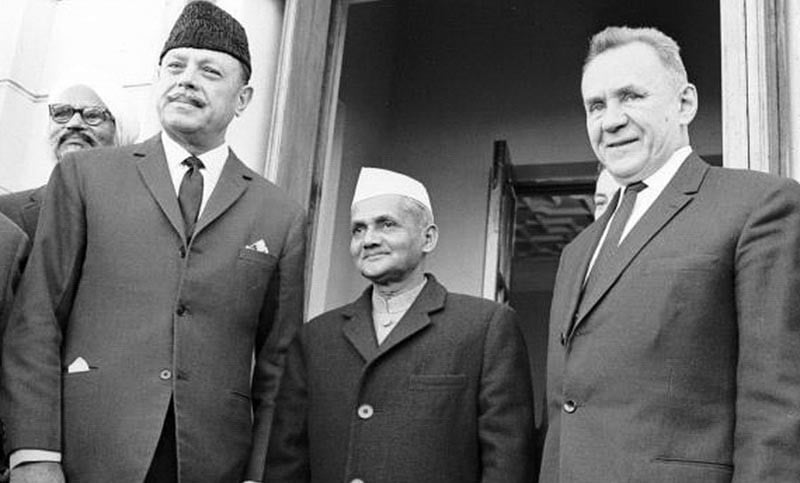 In the first part of this essay published in TNS on March 24, 2019 (http://tns.thenews.com.pk/democracy-first-dictator), we discussed the farcical election held by General Ayub Khan and his extension of presidential term for another five years. We also discussed the Indo-Pak war of 1965 and its background. In this article, we discuss the major parties, players, and points of contention that led to his downfall in March 1969.

When the inconclusive war ended in September, 1965, there was no formal agreement of ceasefire, and both sides fearing an uncontrollable escalation backed out. At this stalemate, the USSR -- one of the erstwhile two superpowers -- offered to mediate between India and Pakistan. Both agreed and General Ayub Khan reached Tashkent on January 3, 1965, to be received by Premier Kosygin. Initially General Ayub tried to reach a formula under which India and Pakistan could have productive talks on Kashmir, but both Shastri and Kosygin were not ready to discuss Kashmir issue at all.

Finally on January 10, 1965, both Ayub and Shastri signed a nine-point Tashkent Declaration that envisaged disengagement along the Indo-Pak borders and Kashmir ceasefire line by February 25. There was just a mention of seeking ways to normalise relations and possible discussions on Kashmir in future. Since both sides did not achieve much from the Tashkent Agreement, Ayub and Shastri were under tremendous pressure from their respective people back home. Shastri suddenly died after signing the agreement in Tashkent and his body was flown to Delhi. His death shocked General Ayub too, who himself was under health strain.

Within a week the diplomatic relations between India and Pakistan were restored and everybody was back to square one. Popular sentiments in Pakistan turned against Ayub Khan and more so in West Pakistan. From East Pakistan, Awami League Chief Sheikh Mujibur Rahman announced his party’s six-point formula in a Karachi gathering on February 12, 1966. The six points demanded a federal constitution, central government limited to defence and foreign affairs, separate currencies for the two wings, provincial right to tax collection and spending, foreign exchange earnings by East Pakistan to be at its disposal, and each province to be allowed to form its own paramilitary forces.

Since the formation of the One-Unit in West Pakistan and the Parity Principle imposed on the two wings, the demand for restoration of provinces in West Pakistan and greater provincial autonomy for all provinces was gaining momentum. By the mid-1966 the situation had turned dramatically against General Ayub Khan who was facing rising student protests and within his own close circle inner fighting was going on. As Ayub grew older and wary, he started looking askance at his close associates. Within months, three of his courtiers either left him or he asked them to resign. Bhutto, Shoaib, and Nawab of Kalabagh -- who was governor of West Pakistan since 1960 -- all were out of power.

In July 1966, Sharifudddin Pirzada became the new foreign minister and NM Uqaili new finance minister. In September, General Ayub’s another right-hand man and C-in-C of Pakistan Army, General Musa Khan, retired and General Yahya Khan was appointed the new C-in-C -- a decision that General Ayub Khan would later regret. After the resignation of Nawab of Kalabagh, Ayub Khan appointed the newly retired General Musa Khan as the new governor of West Pakistan. Mind you, in Ayub Khan’s ‘controlled democracy’ the governors were not required to be politician; they were not even answerable to the parliament or assembly members.

The governors and all the ministers were appointed and removed at the sole discretion of the president who was not answerable to anyone. So much so for his democracy. Moreover, those who consider Ayub a forward-looking leader should simply consider the facts that for six long years from 1960 to 1966, Ayub Khan retained a most backward feudal lord as the governor of West Pakistan. The Nawab of Kalabagh was a staunch feudalist who ruled with an iron hand and did not tolerate any demands for democracy or progressive changes to education system.

Those who talk about ‘stability’ during his rule should count the number of ministers he changed in quick succession, especially in the most important ministries for the people such as education and health. In ten years he changed six ministers for education and almost as many for health. So, the ‘stability’ factor -- if there was any -- mattered only for his own personal rule. For his ministers, he selected the most incompetent lot, usually from the lowest echelons of bureaucratic or political rung. Education suffered the most, as educational institutions were closed immediately whenever there were some disturbances.

Even the official Convention Muslim League had no say in administration of provinces as their role was mostly confined to the Basic Democrats at the local level. Those who are interested in reading more about that period and the role of Muslim League may read two excellent books: The Ayub Khan Era by Lawrence Ziring, and The Muslim League of Pakistan (1947 - 1977) by the Russian scholar, Yuri Ponomarev. These books are very well researched and provide an in-depth analysis of the period under discussion. The selection of General Musa Khan as the next governor of West Pakistan is also telling and shows the mindset of General Ayub Khan.

In 1967, the political leaders who were barred from political activities by EBDO (Elective Bodies Disqualification Ordinance), reentered politics after completing their political exile imposed by General Ayub Khan on thousands of political leaders across the two wings of the country. But the regime kept arresting politicians on one pretext or another. For example Mir Ghaus Bakhsh Bizenjo was arrested from Karachi under the notorious Defence of Pakistan Regulations (DPR). The DPR was used again and again by the Ayub regime to silence his detractors and to remove all those who wanted a democratic polity in the country.

In April 1967, Mian Mumtaz Daultana was elected president of Council Muslim League, and in the same month a new political alliance called Pakistan Democratic Movement (PDM) was formed in Dacca, comprising Council Muslim League, Jamaat Islami, Nizam-i-Islam Party, and Awami League (Nawabzada Group). It is pertinent to remember that the Awami League was divided into two groups. The main group hailed from East Pakistan led by Mujib and the other group was from West Pakistan led by Nawabzada Nasrullah Khan. In June 1967, Nasrullah Khan merged his AL with Nizam-i-Islam Party to form Pakistan Democratic Party (PDP).

Now Ayub was beset by all sides, both nationally and internationally. Internally, his experiment of absolute presidential system was failing and finally he was realising this. Internationally, his reliance on the USA right from the 1950s had proved that the USA was not a reliable friend. His disillusionment with the USA had prompted him to write his biography Friends Not Masters published in 1967. This book further estranged Ayub Khan from the USA and it became evident that Washington was no more interested in supporting Ayub Khan and his ‘controlled democracy’ that was despised by the people.

In November 1967, ZA Bhutto formed his Pakistan People’s Party at the residence of Dr Mubashir Hasan, with Bhutto as its chairman and JA Rahim as secretary-general. After his resignation as foreign minister, Bhutto had become immensely popular in West Pakistan thanks to his brilliant oratory, and his promises to disclose the secret behind the Tashkent Agreement. Ayub was increasingly unpopular and under these unfavourable conditions, he decided to celeberate the tenth anniversary of his rule in 1968, some say at the instigation of Altaf Gohar, the information secretary. The celebrations began in January 1968, and people got infuriated at this attempt to fool them.

The beginning of 1968 saw another episode that would have fatal consequences for Ayub’s rule. A 28-person plot for secession of East Pakistan was unearthed. Two CSPs, two Awami Leaguers were among the 28 arrested for anti-state activities. They were charged with conspiring with a First Secretary of the Indian Deputy High Commission and for visiting Agartala (capital of Indian state of Tripura) to discuss their plans for East Pakistan secession. Initially Sheikh Mujib was not charged as he was in prison when the conspiracy took place, but on January 18, 1968, Mujib was arrested again in connection with the Agartala Conspiracy.

The handling of this case was the folly of the highest order, as it took six months just to begin the trial in June 1968. It began in Dacca before a special tribunal with the prosecution charging the accused with ‘plotting to deprive Pakistan of its sovereignty over a part of its territory by an armed revolt with weapons, ammunitions, and funds provided by India’. The tribunal was headed by the recently retired Justice SA Rahman. By the end of 1968, demonstrations started in West Pakistan too, mostly led by student groups.

In November 1968, students became violent in Rawalpindi, curfew was imposed on the capital and all education institutions were closed for the umpteenth time. In the same month, a fire was shot at General Ayub Khan who was addressing a public gathering in Peshawar. Ayub Khan was unhurt but students’ agitation surfaced in many towns of the NWFP (now KP). Once again the DPR was used against the politicians especially targeting the PPP and NAP in West Pakistan, and AL in East Pakistan. Ajmal Khattak, Dr Mubashir Hasan, Rasul Bakhsh Talpur, Wali Khan and ZA Bhutto were all arrested. Pakistan Democratic Movement (PDM) started protest marches in many towns of West Pakistan.

By the end of 1968, the popular demands for the restoration of adult franchise, release of political leaders, and lifting of emergency became louder. The ‘stability’ of the Ayub Khan regime can be gauged from the fact that the first four years of his rule were under martial law till 1962, and the last four years were under emergency rule from 1965 to 1969. Throughout his long rule he kept blaming the politicians for causing disturbances. One of the main demands of almost all political parties and the people at large was provincial autonomy.

When 1969 started the dusk of Ayub Khan’s rule was already in sight. In January, eight opposition parties formed Democratic Action Committee (DAC) to intensify struggle for democracy in Pakistan, and announced an eight-point programme for action. These points revolved around the restoration of a federal parliamentary system of government, direct elections based on adult franchise, and freedoms of expression and assembly. As a last ditch effort to survive, General Ayub Khan called a roundtable conference (RTC) with DAC. Now he was ready to sit and talk with the same politicians whom he had been maligning and humiliating for almost two decades. Of course the RTC failed.

There are some very good eye-witness accounts of the last months of Ayub Khan in power. For example, Pakistan: A dream gone sour by Roedad Khan, Through the Crisis by S M Zafar, and Pakistan: Qayadat Ka Buhraan by Lt-Gen Jahandad Khan. They tell us about the behind-the-scene shenanigans of the C-in-C Genral Yahya Khan, and his support to the anti-Ayub politicians and the elements within the army. Finally, General Ayub Khan was forced to resign on March 25, 1969. General Yahya Khan took over as the new martial law administrator and later appointed himself as president of Pakistan.

The study of the dictatorial rule of General Ayub Khan spanning over a decade is a must for all those who claim that his rule was the best and a presidential system is the remedy. Apart from some industrial development and some improvement in family laws, Ayub Khan did tremendous harm to the country’s democratic structure. The country has not yet recovered from the wrong precedence he set for his successors.

The endgame of a dictator