Another illusion for the thirsty Thar Desert 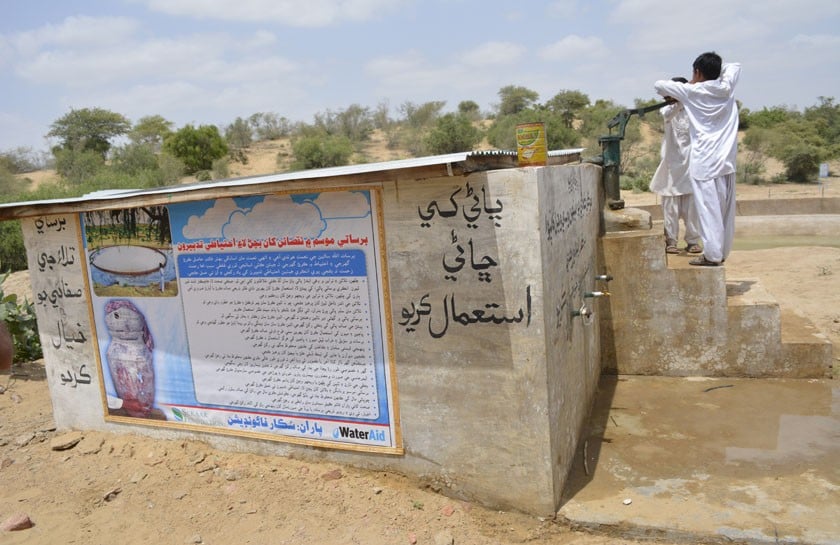 There are around 600 RO plants in Tharparkar but not even half of them are functional. More than half of the desert population draws water from wells.

The plants installed by Pakistan People’s Party-led Sindh government need regular service and upkeep for people to get water from them -- the sole purpose for which they were installed.

Prime Minister Imran Khan on his recent visit to Thar on March 8 announced that the Federal government will install 100 reverse osmosis (RO) plants in the area and that this will only be ‘the beginning’.

Sindh Government claims that 80 percent of the installed plants are operational. However, independent sources say that around 40 percent RO plants are functional. There is no mechanism or monitoring system to ensure the water quality.

The ones already there are mostly non-functional which results in immense hardships for the people of the desert. Here is a picture of the un-ending toil for residents of just one village, Ranjho Noon in Thar Desert in the south of Sindh.

Located in the Tharparkar district’s Islamkot area, some 370 kilometers away from Pakistan’s financial hub Karachi, there are 200 households in the village of Noons, Khaskhelis (Muslims) and Meghwar of Hindu community.

The Ranjho Noon village’s water is unfit for consumption. The villagers fetch water from a well in the neighbouring village located 3 kilometers away. The water is sweet there. This daily exercise in which men, women and children -- all are involved, consumes half of their day. Women walk to the well and back carrying earthen pitchers on their heads while men and children mostly use donkeys or push carts to bring water back home.

A tube-well installed in the village is non-functional for the last five years due to non-maintenance.

Ranjho Noon inhabitants would now assemble at the plant built in the centre of the village. It saved time and reduced hardships for villagers. They were getting better water but that did not last long. Lack of maintenance and shortage of funds rendered the RO plants non-functional.

Every time there is suspension of water supply from the RO plants which can go on for months, villagers are back to traditional ways of collecting water from nearby village. Tap water is a dream here.

Ranjho Noon is one village out of the 2,700 scattered villages in Tharparkar desert district housing 1.65 million people over 19,638 square kilometers. Water is scarce throughout the desert.

In desert the temperature goes up to 50 degree centigrade and sometimes even crosses 50C. Hardships increase with increase in temperature.

"We can foresee hard days approaching when it would be extremely difficult to fetch water in scorching heat," says Naseer Noon, an inhabitant of Ranjho Noon village.

At Chachro public gathering, PM Imran informed Tharis that he was well aware that Tharparkar was the most backward area of the entire country and people of Tharparkar lived below the poverty line.

Khan told the audience that he was well aware that during the past four years death toll of children had risen to 1,300 due to malnourishment and hunger.

Mentioning Thar Coal project, which he thought would transform Pakistan; the PM assured locals that they will be the first to get the benefits of the coal reserves.

On March 19 this week, Pakistan launched its maiden power project on local coal from Tharparkar, which, according to officials, is estimated to cut oil imports for power generation worth up to $1.6 billion per annum.

As part of Tharparkar package, the PM announced health cards for 112,000 families, establishing of two modern mobile hospitals and four ambulances for the desert.

For the last four years, the area is facing drought that has affected its socio-economic fiber. Infant mortalities here have made headlines worldwide.

A canal is the long-term solution

Rains or no rains, water accessibility is a major issue in Thar Desert. Apart from drawing water from wells, rainwater is stored in ‘Tarayoon’ -- open sandpits or storage tanks. Construction work on small dams is going on in Nangarparkar -- one of its six taluka (tehsils) comprised of hilly areas. Then there are modern methods in the form of RO plants.

According to Ali Akbar Rahimoo, representative of Association for Water, Applied Education & Renewable Energy (AWARE), a non-government organisation in Thar Desert, there are issues in the implementation of PM’s plan to install 100 RO plants in Tharparkar.

"Tharis want sustainable solution to water crisis that is stretched over seven decades. What has come out through PM’s announcements is that federal government’s approach towards Thar is based on adhocism," says Rahimoo who stresses on canal water supply to Tharparkar coupled with some alternates.

One step could be to complete the Rainee Canal Project which was initiated in 2002. As per design, Rainee Canal will offtake from left side of Guddu Barrage and will flow in Ghotki, Sukkur, Khairpur and Tharparkar districts.

"Canal route will be Ghotki’s desert, Nara area of Khairpur, Achro Thar of Sanghar district, Umerkot and will end at Chachro of Tharparkar district. As per design, there will be pipeline stretched from canal that will supply water to Tharparkar," Rahimoo added.

Rahimoo also questions implementation of PM’s plan to establish 100 ROs. "It is unclear how the plan to install RO plants will be implemented after the 18th amendment as there is little role of federal government in the province. So who will make sure the sustainability of the RO plants? Who will bear the maintenance charges," he asks.

At present, there are six pipelines which supply water to Tharparkar.

Dr Mahar also talks about demerits of RO plants. "If an RO plant is extracting 100 gallons of water, then only 30 percent of the water is drinkable. Remaining 70 percent of water is full of salts and has high TDS level. Wherever the reject water is thrown, it is hazardous for the soil."

Another illusion for the thirsty Thar Desert