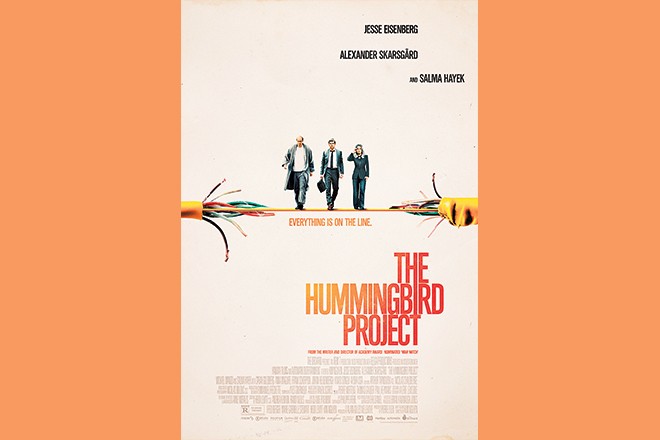 Whatever it takes to keep a techno hellraiser on its feet, The Hummingbird Project doesn’t have it. Just don’t blame the film’s two lead actors. Jesse Eisenberg surges with all the manic energy he showed in The Social Network, playing Vincent Zaleski, the hustler behind an idea to run fiber-optic cable from Kansas to a Wall Street databank in New Jersey to gain a millisecond of info advantage -- the speed of a hummingbird’s wing beat -- that could bring in billions.

Alexander Skarsgard excels as Vincent’s cousin Anton, the genius coder behind the idea. The cousins are Russian Jews, raised in New York and looking for a big idea to run with. Playing geek with a vengeance, Skarsgard shaves his head, walks stooped and does everything possible to dim his hottie starshine. Even that can’t distract from the fact that the convoluted script, written by Quebecois director Kim Nguyen (War Witch), keeps tripping over itself in a strenuous effort to drum up interest into a premise that is decidedly uncinematic. Take Eva Torres, the hedge-fund manager played to the hilt and beyond by Salma Hayek, who’s eager to steal the tunnel concept from the Zaleskis, who used to work for her. She’s the she-wolf always nipping at their heels and working overtime to trump their plan with her own.

Wait, I’m making the movie sound like way more fun than it is. Nguyen is frequently sidetracked with laying out the logistics of the project as the cousins hire drilling expert Mark Vega (a stellar Michael Mando) and rope in a principal financier in Bryan Taylor (Frank Schorpion). Then there’s the matter of getting rights to dig tunnels under everything from national parks to the homes of private citizens (a no-go for the Amish). The minutia weighs a ton and there’s lots and lots of drilling.

The film’s documentary-like attention to detail may lead you to think that The Hummingbird Project is based on a true story. Not a bit, it’s all a Nguyen flight of fancy. To add a sense of emotional intimacy to the dusty details of high-frequency trading, the filmmaker invents a stomach-cancer crisis for Vincent that he ignores to keep the project on track. And, of course, at the last minute, something goes wrong with Anton’s code. Nguyen can stir up all the sturm and drang he wants, but Hummingbird feels as humdrum and impersonal as a blueprint.

Written and directed by Jordan Peele

It’s scary as hell, and that’s just for starters. But Us, the new mesmerizing mindbender from writer-director-producer Jordan Peele, also carries the weight of expectation. Get Out, Peele’s smashing debut from 2017, was a brilliantly caustic satire of race division in America that won Peele an Oscar for Best Original Screenplay (he’s the first African-American to triumph in that category) and became a phenom with critics and audiences. How can Peele top that? Short answer: he can’t and doesn’t. In interviews, Peele insists that Us is a straight-up horror show. Not really. Leave it to Peele to blaze a trail by putting a black family smack in the middle of a commercial thriller-diller. That’s more than a novelty, it’s a quiet revolution. And Peele’s hints at the larger conspiracies of race, class and social violence festering inside the American dream resonate darkly. Ding Peele all you want for taking on more than he can comfortably handle, but this 40-year-old from New York who started as one half of the sketch-comedy team of Key & Peele is now shaping up as a world-class filmmaker. Flaws and all, Us has the power to haunt your waking dreams. You won’t be able to stop talking about it.

Critics at least tread carefully as Peele introduces the Wilson family of sunny California. Mom Adelaide (Lupita Nyong’o), dad Gabe (Winston Duke) and their two kids -- Zora (Shahadi Wright Joseph) and Jason (Evan Alex) -- are on vacation in Santa Cruz. Gabe has an unspoken competition with his friends the Tylers (Elisabeth Moss and Tim Heidecker), a white couple with twin daughters given to conspicuous consumption. Everyone is up for a fun time, especially dad (the excellent Duke -- looking much like Peele -- gets laughs in the unlikeliest places). But Adelaide is not feeling it. In a chilling prologue, set in 1986, we see Adelaide as a child getting majorly freaked out by a trip to a beachside funhouse containing a hall of mirrors. Now the grown Adelaide is back on the same beach where she was traumatized as a child, and she’s taking her own children along. You can cut the foreboding with a knife -- or a pair of gold scissors.

Scissors figure prominently when the Wilsons are confronted in their driveway by unexpected visitors. Since the scene is included in the film’s trailer, I’m not giving away anything to note that these home invaders -- clad in red -- are exact doubles of the four Wilsons. And the scissors these zombie-like doppelgangers carry are meant to slit throats. "What the hell are you?" asks Gabe. The answer is croaked out by Adelaide’s evil twin (the only double who speaks) in a voice that induces shudders: "We’re Americans."

The political implications of that genuinely creepy setup are tantalizing, as are the film’s allusions to Hands Across America -- the 1986 event in which a human chain of millions was formed to help alleviate poverty and hunger -- and the thousands of miles of empty tunnels that run under the continental United States, including the Underground Railroad that symbolizes African enslavement. Is Peele referencing the Sunken Place of the Trump era in which the new gospel preaches fear of the other? If so, the theme remains frustratingly undeveloped. Yet Peele, the supreme cinema stylist, is on a roll. The violence is unnerving as the doubles set out to untether themselves from their human counterparts. By necessity, the Wilsons become a family that kills together. Even the Tylers get invaded. Kudos to Moss, who takes a small role and runs with it. The scene in which her character’s wild-eyed double smears on lip gloss is an unforgettable blend of mirth and menace.

Still, the acting honors in Us go to Nyong’o, who is actually playing two roles, one as protective mother and another as predator. She is superb as both. And what she does with her voice as Adelaide’s double is impossible to shake. Nyong’o, already an Oscar winner for Twelve Years a Slave, should be in the running again for delivering one of the great performances in horror movie history, right up there with Sissy Spacek in Carrie and Jack Nicholson in The Shining.

Peele, an unapologetic horror fanatic, nods to those films and dozens more in Us, including Invasion of the Body Snatchers, Jaws and Michael Jackson’s Thriller. Yet his style is completely his own, as assured as it is ambitious. With the help of cinematographer Mike Gioulakis, up to his It Follows mischief, and a score by Get Out composer Michael Abels that is built to shatter your nerves, the action never lets up. The Beach Boys anthem ‘Good Vibrations’ is featured in the mix, as is ‘I Got 5 On It’ by the hip-hop duo Luniz. You’ll never be able to hear those songs again in the same way.

There are times when Us plays like an extended and exceptional episode of The Twilight Zone, the 1950’s TV series revived next month on CBS All Access and hosted by Peele in Rod Serling mode. But Peele can’t stop himself from reaching higher and cutting deeper. The twisty road he takes us on opens itself to many interpretations. There are times when the film grips us with such hallucinatory terror that you may think it’s another of Adelaide’s PTSD-induced nightmares. Maybe it is. Or maybe it’s a ghastly reflection of the way we live now. Peele uses a Biblical quote from Jeremiah 11:11 that suggests even God has turned his back on us. What is never in doubt is that Peele is using the scare genre to show us a world tragically untethered to its own humanity, its empathy, its soul. If that’s not a horror film for its time, I don’t know what is.