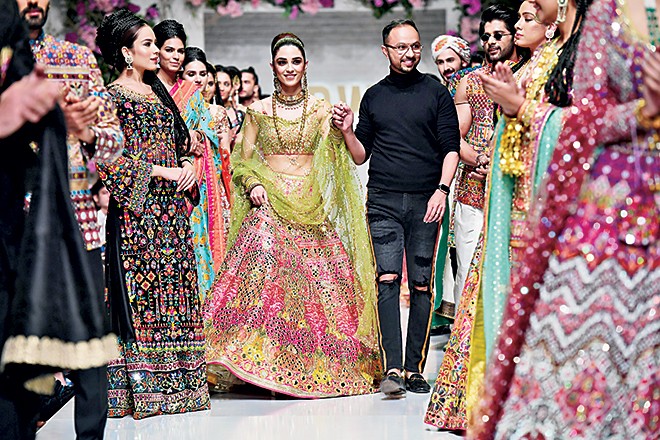 The three-day Fashion Pakistan Week SS2019 unrolled with renewed energy and a refreshing feel good factor owed to changes in the format but will it be enough to sustain the seasons up ahead if the lineup doesn’t keep improving?

It was a relief to not have to walk through the metal detectors and polished marble interiors of a hotel, as has been customary for Fashion Pakistan Week for over a decade. FPW took its Spring Summer 2019 edition outdoors this season and set against the backdrop of swaying palm trees, under a moonlit sky and amidst a cool and very refreshing Karachi breeze, it came forth with completely different energy. I wouldn’t go as far as saying that the lineup was any better or any worse than it usually is but just the renewed energy and the streamlined nature of the event was enough to top it up with bonus points.

Not to say that it didn’t have its moments of pure joy.

The three-day FPW SS2019 took off with a Sana Safinaz solo show on day one and like everything Sana and Safinaz do, the show and its style quotient was delightful. The extensive collection began with an expression of colour and texture in what could be best described as an ode to the East; this segment carried clothes from the Sana Safinaz ready to wear wedding line, newly introduced for young women looking for quick options. The palette and its treatment wasn’t necessarily classic Sana Safinaz but it was perhaps a nod to the brand’s younger, millennial clientele. The collection, aptly titled Message from the East, then proceeded to heavier, luxury pieces that would be customized. Replete with bows, ruffles and elegant silhouettes, this was more of what one is used to seeing from the brand. Putting it all together in one showcase just ensured that it offered something to everyone.

The thing about solo shows is that they give the brand the space and the liberty to flaunt their vision beyond the clothes. It’s so important to conceptualize the show space, the look, the props and accessories, which isn’t always possible when seven collections have to be shown, back to back, on the same runway, the same day. Sana Safinaz created that mood board by putting up faux trees in full blossom, allowing an exotic air to embrace the evening.

Moving on, the rest of the shows may not have been so extensive but it was a smart idea to separate the remaining two days into one for casual, pret-a-porter and the other for luxury and wedding wear. Contrary to what we have been witnessing and disapproving for so many years - a confusing medley of all sorts of brands, that is – the Fashion Pakistan Council took a decision and just separated the genres. It was a very welcome decision.

Day Two presented collections from Generation, Boheme, Gul Ahmed, Alkaram, Nauman Arfeen, Obaid Shaikh, Yasmin Zaman and Sania Maskatiya. The diverse aesthetic of each designer kept the day interesting, preventing it from falling into a bored lull even when the collections weren’t too exciting. Generation usually holds one’s interest for its take on social causes; such was the case with No Nonsense Nighat, a sartorial comment on feminism and bringing leitmotifs from a past era back to modern day dressing up. Did the visuals - models marching out to the sound of Talal Qureshi and Naseebo Lal’s fiery ‘Aag’ look good? Yes. Will they prove to be powerful enough to bring the parandah back? Probably not. On the same streak of ethnic commitment, Kanwal’s collection for her brand Boheme was more cohesive and wearable. One can never get enough of white and ivory cotton, styled in traditional silhouettes, for Pakistan’s long and arduous summer and this collection offered some smart solutions for dressing up and standing out.

Textile brands have historically struggled at fashion weeks simply because - no matter what anyone says - fabric is not fashion unless it’s styled in a forward way. But the curse was broken this year by textile giants Gul Ahmed as well as Alkaram. Gul Ahmed took the wearable route to ready to wear options in mostly white formal clothing but MAK by Alkaram, a division of the brand created by veteran designer Ather Hafeez, was sporty and more tuned to youthful day wear. Both brands branched beyond traditional joras in their creative vision and presented quite a few interesting options, which will be available in stores.

Nauman Arfeen gave some solid styles in menswear while Yasmin Zaman’s collection, albeit safe and somewhat predictable, was clean cut and solid in terms of palette, finish and aesthetic. The day ended with Sania Maskatiya’s NYFW collection, designed for Autumn Winter 2019 but available already at Sania Maskatiya stores nationwide. The black and white monochrome palette, combined with metallic accents for added dimension, was almost architectural in its ethos and was a delight to witness.

In Pakistan, the word ‘festive’ largely falls into ‘wedding’ and so Day Three at fashion week was mostly about wedding wear. The day opened with a dynamic collection from Nomi Ansari, which was - as expected - as kaleidoscopic as its name suggested. Wedding wear, what most people don’t understand, is difficult to develop a signature for as it usually, mostly looks the same. But designers like Nomi Ansari shine like a beacon of colour and are appreciated for their individualistic, unapologetic ode to rang. One has to mention that Nomi Ansari is also a master craftsman, almost an engineer, evident in the construction of his garments especially the cholis that were held together by a single hook. The other standout collection from this day was The PinkTree Company’s Mayon Mehendi, which - as the name suggests - was a forecast for summer weddings. It is The PinkTree Company’s commitment to keeping tradition alive, in silhouette or craft, while keeping it relevant and contemporary at the same time that is its strength. Add to that an unmistakable signature and you have a brand to reckon with.

The day continued with lots of celebrity appearances. Azfar Rehman walked for Amir Adnan, who presented lots of layers, a variety of lowers and some fun silhouettes, which took the brand beyond its stately signature and into a lighter realm. Huma Adnan, who has now replaced her high street brand with her own eponymous label, showcased her vision for monsoon weddings with lots of colour and craft, the brand’s signature. TV actress Sara Khan walked as Huma’s muse. Zainab Chottani presented a lot of pretty pastels in her wedding wear collection, which was wrapped up by a fiery performance by Asim Azhar, accompanied by an equally fiery Hania Amir as showstopper. While the red on red finale outfit is classic and has been a staple in Zainab’s collections for years (even her luxury lawn has a chikankari red on red number), it was the pastel florals that will go down as memorable in this collection.

Saira Shakira, as always, showed a very confident collection. The duo is unafraid of taking risks at the drawing board and despite the fact that some of their experimentation goes amiss at times - like the handkerchief asymmetrical hem on one of the earlier shirts - it’s still good that they at least attempt to think out of the box. Plus, it is these small elements that allow their collections to stand out. Lastly, while either of Nomi Ansari or The PinkTree Company would have made for a more outstanding grand finale to fashion week, Tena Durrani closed the show with a sound and stable yet quite forgettable collection. Tena has the finesse of an experienced designer and her creations are, by all means, aesthetically balanced but they are also just as predictable.

That more or less sums up Fashion Pakistan Week SS2019, which had its highs and predictable lows. One of the high points of the event, I must add, was the inclusion of Samiya Ansari as Style Director. We’ve become used to witnessing flawless work by Nabila’s creative team year after year and while it’s good to have a fool proof option, it was also reassuring to see that there are other options. It just hinted at industry growth and expansion and the cherry on the cake is that Samiya did a more than decent job with the looks.

Conclusively, the three-day Fashion Pakistan Week SS2019 unrolled with renewed energy and a refreshing feel good factor owed to changes in the format but here’s the million dollar question: will it be enough to sustain the seasons up ahead if the lineup doesn’t keep improving? It’s important to keep getting credible names onboard; one hopes to see names like Khaadi, Shamaeel, Misha Lakhani, Sonya Battla, Body Focus Museum, Wardha Saleem, Sanam Chaudhri, even Ayesha Farooq Hashwani and Nida Azwer show on the platform. And these are just names from Karachi. FPW needs to rope in top brands from Lahore to be truly nationwide inclusive. It’s important for Deepak Perwani and Maheen Khan, integral parts of the council, to also show. Because the sea-breeze may be cool and the full moon over the audience may be magical but at the end of the day it’s the clothes on the runway that need to shine brightest.