A structure for their service 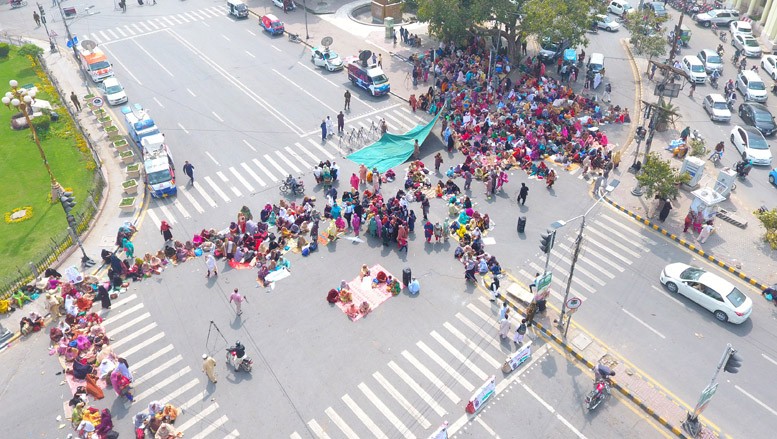 Sarwatun Nisa was on a door-to-door duty to give anti-polio drops to children under five years of age in Khanewal district last December when she got a call saying there was an emergency in the family.

Her teenage daughter had been hospitalised in Lahore where she was to sit an exam the next day. The child had suffered gastrointestinal perforation, an emergency requiring immediate medical attention. By the time the child was taken to the hospital, so much blood had spilled internally that it caused death.

Nisa, a Lady Health Worker (LHW), recalls making multiple attempts in those couple of hours to seek permission from the District Health Office (DHO) to leave for Lahore to be with her daughter. The higher ups were adamant that no one was allowed to leave the National Campaign Against Polio Virus without meeting their targets. She gave up, and kept grieving for her loss while proceeding with the job.

From the 18th to the 21st of March, Nisa and dozens of other health workers who run child and maternal healthcare in the Punjab held a protest camp at Charing Cross on The Mall, demanding better remuneration and dignified contracts with a clearly laid out career trajectory. Multiple rounds of talks among leaders of the protest and government representatives took place.

Back in December, Nisa endured her personal loss with patience and continued to serve on the job, this time she and her colleagues seemed to be in no mood to surrender. "We have given sacrifices for this job and what do we get in return?" Nisa asked, as she was overcome with emotion while narrating the account of her daughter’s demise.

An anthem playing on a music system a few feet away could be heard in the background,

"Sari lut mar da hisab hoye ga … Warna fer khooni inqalab hoye ga" (There will be a bloody revolution if there is no justice done for the loot and plunder).

Ever since it was started across the country in 1994, the LHW Programme has resulted in concrete improvements in maternal and child health indicators in the country. A 2015 study conducted at the Harvard Kennedy School shows that between 1994 and 2007, infant and maternal mortality rates declined rapidly in areas served by LHWs, compared to unserved areas. Similar improvements were witnessed in contraceptive prevalence rates and immunisation of children at birth in areas served by LHWs.

While the programme’s field staff, including Lady Health Supervisors (LHSs) and drivers, have helped attain these targets, the journey has not come easy for them. In fact, in all these years, they’ve been fighting on two fronts. In the field, they’ve raised awareness about health, nutrition and hygiene and provided services during pregnancies, child births as well as national programmes on various communicable diseases. Alongside, they have fought with an inert and apathetic bureaucracy to secure incremental improvements in working conditions by coming out on roads and demonstrating over the years.

Battle-hardened with years of experience in contentious politics, the protesting workers at Charing Cross vowed to end the sit-in only after the Health Department had issued a notification meeting their demands.

Rukhsana Anwar, the President of the National Health Programme Workers Association was the force behind the camp. She and her close aides spent the four days boosting the morale of the participants while handling media appearances as well as calls from government functionaries, including a few from the Police Department with veiled threats to end the sit-in.

Anwar recalled how she had been leading demonstrations since 2010 -- two years after she got elected as the association’s founding president, an office she’s held securely through subsequent elections.

"We know how to get our rights. We’ve done it in the past, we won’t leave without success this time too," she said.

The first country-wide demonstration was held in June 2010 when health workers weren’t even considered regular employees of the government, she told TNS.

Anwar also remembered the first protest where workers confronted baton wielding riot police in Islamabad in the March of 2012. Subsequent protests in the month of March led the then Chief Justice of the Supreme Court of Pakistan, Iftikhar Muhammad, to take a suo motu notice of the matter. The court directed the government to regularise the services of the health workers. Even after the court’s directive, it took the government a couple of years to regularise their services. "The LHWP staff became regular employees of the provincial governments in 2016," Anwar says.

This time, health workers demanded the lifting of the ban on recruitments. The ban had come into effect after the LHWs were declared a ‘dying cadre’. To meet the ensuing shortage of staff since then, many LHWs have been given additional charge of the supervisor’s office, a grade-7 appointment, without the corresponding pay and perks.  Those with additional charge like Abida Parveen from Chiniot are, therefore, overworked and underpaid.

Parveen, who was at the sit-in all four days, told TNS that she had been serving as an LHW for 15 years. Since the last two-and-a-half years, she has held the additional charge of the supervisor’s office without any increment in her monthly salary of Rs19,000.

Outlining other demands, Anwar said a service structure should be developed for LHWs, LHSs and drivers with their pay-scales revised to grade 7, 14 and 6, respectively. She also sought revisions in compensation received for additional duties during national campaign for polio eradication and anti-dengue drives. "Currently, all workers get a flat Rs1,900 for duties during polio campaign," she says, adding, "this should be revised and a daily rate of Rs1,000 announced for LHWs, Rs2,000 for LHSs and Rs500 for drivers".

Dr Munir Ahmed, the Director General of Health Services in the province, said the government had agreed in principle to end the ban on recruitments. "Madam Minister had announced at a press conference last week that the dying cadre plan policy would be cancelled soon," he said, adding that a notification would soon be issued for the purpose. Asked why has there been a delay in the notification, the DG responded, "I’m from the management. If I had agreed to this demand on the first day they would have come up with three more demands. Now they’ve settled on one."

The DG said work was also underway on promotions and seniority lists. "It’s bound to take some time. Maybe around two to three months," he said.

A structure for their service