Aurat March and its discontents

Society takes exception to women’s rejection of the authority of the male voice and their daring to speak of things that only men can do and speak about. The march has opened up space for debate on some serious concerns 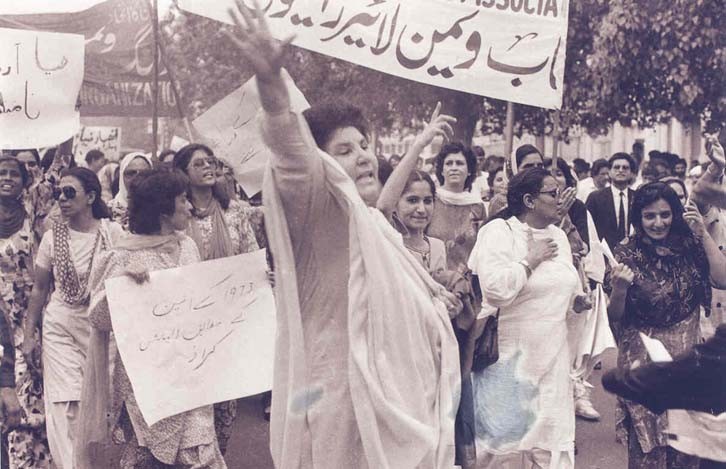 Mainstream Pakistan is shocked by the slogans of Aurat March. A nation that is characterised by its free use of sexual abuse that not only targets women with explicit reference to their sexual body parts, but does so with impunity, is shocked by women’s demand for bodily integrity and safety. A culture where men -- all men -- ranging from the highest in the land to the littlest street urchin and the local badmash, freely interlard their speech with language that strips women of their clothes, their autonomy; their self-respect, reduces them to their sexual bodily parts and spells out in explicit detail what they, as men, can do to them -- is shocked by the slogans of Aurat March.

The nation which remained silent at Khadim Hussain Rizvi’s filthy language targeting women in violent street protests, is morally outraged by women speaking out for their own bodies and staking their claim to agency, autonomy and respect in the home, the street and the marketplace.

The Aurat March slogans challenged the status quo and put patriarchal authority thresholds to doubt. The terms and terminology of Khadim Hussain Rizvi’s sex-based abuse did no such thing. Thus while some did take exception to his language, the greater concern of the many was not with Rizvi’s hate speech and incitement to rape but with the public inconvenience caused by the protest.

When women came out into the streets of Lahore on February 12, 1983 to protest Zia ul Haq’s proposed Law of Evidence, fatwas were passed invalidating their marriages and declaring their children illegitimate. They were labelled as prostitutes, kafirs and CIA/KGB agents and accused as elitist women who knew nothing about the ‘real’ lives of ‘real’ women. This too was not surprising. At a time when mainstream political parties were either silent or colluding with the military government, women were the first to challenge a dictatorial regime and raise their voice for democracy; the first to speak publically for women’s social, economic, legal and political rights and the first to openly highlight the gap between ground realities and the complacency of the societal self-image as a culture that accords high status and respect to women.

But why the hysteria over the Aurat March in 2019? The 40 or so years that lie between February 12, 1983 and March 8, 2019 should have inured society to the phenomenon of women raising their voices for their rights. As part of WAF and the larger women’s movement, women have turned to the law on issues as disparate as the privatisation of the Women’s Bank and the adult woman’s right to choice in marriage; they have prevented marriages to the Quran, protested honour killing, marched for joint electorates, minority rights and peace; they have spoken out against religious extremism, discriminatory laws and violence against women in the home and the street and have raised their voice for women’s parliamentary representation; for women’s right to paid work, labour rights and the rights of landless peasants.

Orchestrating their demands, and in their own right too, writers like Kishwar Naheed and Fahmida Riaz have rejected patriarchy  through poems like ‘Ham GunahgarAurtein’ and ‘Hazoor, yeh siah chadar meri nahin, aap ki zaroorat hai." So why the hysteria now, when a new generation of women voice their demands for respect, safety, agency and autonomy?

The answer lies in the shift from the broad outlines of larger public issues to their detailing as experienced and expressed publicly and privately in the daily routines of life. It lies in the irreverent tone of voice; in the appropriation and subversion of gender-based stereotypes and clichés that naturalise male dominance and routinise violence against women. It lies in women’s use of satire, humour, aphorisms, inversions, role reversals that challenge power-based privileges. Not only did the Aurat March foreground the personal as the political, it challenged patriarchal authority thresholds by turning language on its head, and joked and laughed while doing so.

Authority takes itself seriously and does not respond well to laughter. And that is the reason why Aurat March slogans were met with howls of outrage, anger, accusations of vulgarity, immodesty and much more and the ‘bahaya’ slogans of the Minhaj al Quran women’s counter-march that calls the Aurat March women ‘gali ki kutiya’ accepted as civilised expression.

This is not to say that society condones rape, sexual harassment, honour killing etc. What it takes exception to is women’s rejection of the authority of the male voice and their daring to speak of things that only men can do and speak about.

Given the furore, there is a need to examine the Aurat March slogans and connect them to their underlying meaning and referential field. ‘Apna khana khud garam karo!’; ‘Mujhe kia maaloom tumhara mauza kahaan hai!’ is not just about warming up the food and lost socks. It is about male privilege and entitlement that take the woman’s services for granted and see her compliance as moral imperative. Not a serious issue? Elitist? ‘Westernised’? Take a look at recent news reports of the husband who killed his wife for serving a cold dinner even as the March was taking place, and the father who beat his twelve year old daughter to death for not making a ‘gol roti’, and justified his act with the statement as reported by the media: ‘You would do the same if it happened to you!’

‘I will burn your honour to the ground and walk smiling through the gates of heaven’. Shocking!

Only the worst can be said of a woman who defiantly dispenses with her honour! Except that the slogan is not about the woman’s honour at all, for the simple reason that society gives her none. It is about male honour and privilege, and the murder and mutilation of women in the name of that honour. About forced marriage and male pride and the denial of women’s right to education, paid work, mobility. It is about the objectification of women as property and the male right to dispense with them as they will. It is about the law of Qisas and Diyat that makes murder easy.

In the face of this, should she allow herself to be fooled by the ‘ghar ki rani’ myth and endorse a value that is the cause of her shaming, deprivation and death? Is this still an immoral statement? If so, whose immorality is it about -- the man’s, the woman’s, or of the society that condemns her for speaking out?

The Aurat March has opened up space for serious debate. Moral outrage as refusal to look uncomfortable realities in their face should not deflect attention from what are very serious concerns.

Aurat March and its discontents