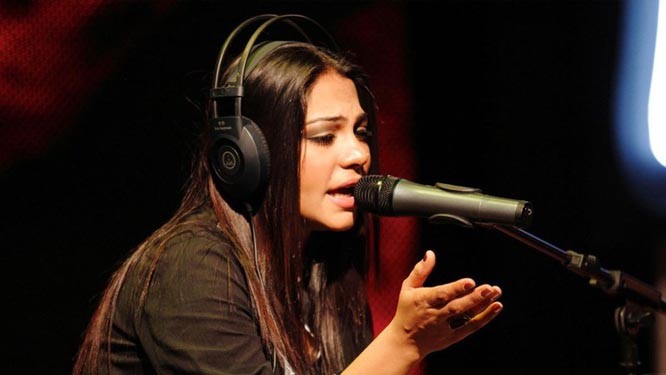 It was apparent from the Sanam Marvi concert that was held at the Alhamra last week that she is now a more confident performer who has shed her earlier tentativeness and eagerness to please the audience. She is now more self-assured and commands what the audience should listen to rather than being driven by their wish fulfillment.

It is always difficult for an emerging or new artiste to impress their taste upon the audience. Rather it is the other way round, with the audience writing the list of songs they want to hear. This operative principle is not easy to override as the assumption is that the artiste performs for the audience and the ultimate reward is their appreciation. And what greater sign of appreciation could there be than being asked to perform to their desire?

But it can be a hindrance when the artiste wants to present something truly off-beat. The audience reaction could be a real hindrance to such experimentation or an out-of-the-box experience. Many an artiste desists from experimentation in public and caters to the audiences’ taste instead. This can explain in many cases the limited repertoire of many well-known artistes who are constricted by popular taste and popular response. After a while they begin to stagnate and do not openly experiment for fear of an unfavourable response.

Sindhi music in the late nineteenth century was influenced by court musicians who were patronised by various princely states in the area. On one side was the tradition of the "soong fakirs" who were roving minstrels and on the other the rendition of the kalam on the shrines which was extremely specific and particular to each shrine. During the course of the twentieth century, a new ang of singing the Sindhi kaafi emerged and was made acceptable by the likes of Ustad Ashiq Ali Khan and Ustad Manzoor Ali Khan, the latter was a great exponent of the Sindhi kaafi and his ang was well-respected by those initiated into music and looked up to by various types of musicians.

In our times probably Abida Parveen has been the most ardent follower of that ang and has gone on to establish herself as the leading vocalist of the country in the last couple of decades. She has also catered to a more diverse audience within the country and in the subcontinent. She branched out into singing the ghazal and the geet which has a wider audience in a land populated by Urdu speaking Punjabis in great numbers. Still, she has persisted with the virtuosity that she acquired while she was going through the regime of her training.

Sanam Marvi, too, caters to a diverse audience and her forte has not really been the Sindhi kaafi but the kaafi which is rendered more in the geet ang. Abida Parveen has not allowed herself fully into the mould of singing the geet while she renders the so called kalam of the famous poets, both in Sindhi and Punjabi, and to some extent the various dialects that she indulged in particularly while she was in India. But the ability to invest her singing with greater musical possibilities separates her from the rest of the Sindhi vocalists.

Ustads don’t take upon themselves the burden of teaching many shagirds. Only those capable of bearing the responsibility of the grind are grudgingly taken.

Sanam Marvi started to sing early as is the wont with those hailing from families of hereditary musicians. Her father taught her along with Ustad Fateh Ali Khan, Ustad Mujeeb Khan and Ustad Ali Nawaz Khan. It’s a tradition among well-known ustads that they don’t take upon themselves the burden of teaching many shagirds. Only those capable of bearing the responsibility of the grind are grudgingly taken under their wings. The first test therefore is not of musical capabilities but rather of patience and the willingness to go through the regimen. The process is sometimes made purposefully difficult and cumbersome just to be a test for endurance. But it appears that Marvi qualified, and crossed all the hurdles to get educated in the traditional manner.

Her father too was aware of all these difficulties and it was his wish that only when she became good enough should she spread the gifts of her art to people at large. Her father, Faqir Ghulam Rasool, was a small-time folk artist from Sindh and like most musician families struggled a lot because of limited opportunities and hence means.

Marvi has come a long way, from a little village near Dadu called Khairpur Nathanshah, Sindh, to where she is now. She was married at a young age probably to avoid want and hunger, but then her husband died, she married again and moved to Qandiwal in Sargodha.

It was not long before she was noticed and was exposed to the platforms that promoted mainstream music, and has now firmly established herself at home and abroad where our music is heard and appreciated. She has improved a lot in the past few years and should stick to the path where the content of the kalam should be more than balanced by her virtuosity. The desire to render the text should be her secondary concern, the primary being the rachao"of the sur and its thehrao and then its expansion through the various graces that incrementally enrich tonal vocabulary.