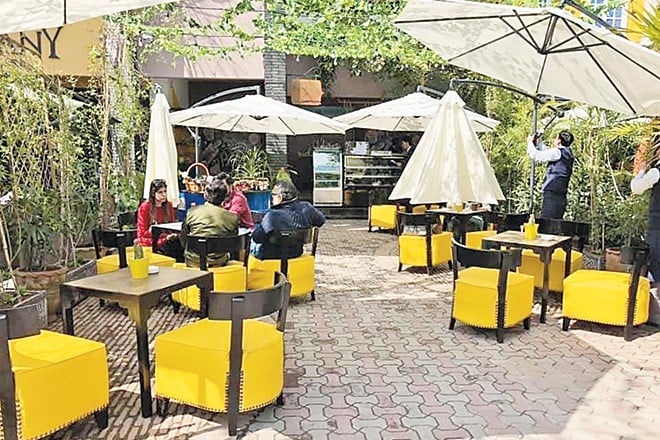 What I love most about Europe is the pop up cafes in every street and sidewalk. These cafes have outdoor seating, a simple menu and quick food that travellers and tourists can grab on the go, while they walk to the attractions in the city. They’re no fuss, light on the pocket and serve some of the most delicious food that can be quickly grabbed. I do think this trend needs to come to Pakistan too.

In Islamabad, we have our first pop up cafe in Kohsar Market, which is the closest an area in the city can get to Europe. Named Sidewalk, the pop up cafe is an outdoor seating area with bright yellow colored chairs and a roof with green leaves and hanging bulbs that are lit in the evenings. It grabs one’s attention from afar during the day because of the yellow color and at night because of the rooftop filled with lighted bulbs. The furniture is simple and so is the menu, which sets the mood just right for a quick bite!

According to Kohsar Market’s standards, the menu is also restricted, which again reminds guests that it’s a pop up cafe that specializes in a few things and serves only them. The newly opened eatery serves croissants, sandwiches, salads, quiches, Turkish breads more authentically known as pides, pizzas and has a rather extensive dessert menu including cakes, pastries, brioche doughnuts, cronuts, eclairs, tarts and cookie shots.

We were told that the pizzas and breads at Sidewalk are its specialty so we ordered them right away! The pizzas were thin, crispy and just the perfect flavor. We tried the Quattro Formaggio or more commonly known as the four-cheese pizza. It has a great flavor of blended Mozzarella, Blue Cheese, Parmesan and Goats Cheese in its topping and keeps you guessing which four cheeses combine to make this interesting taste. We were told that the Chicken and Spinach or the Chicken Jalapeno are great flavors for chicken lovers but we decided to opt for the Eggplant and Mushroom pizza, which had delicious roasted eggplant, olives, mushrooms and mozzarella cheese atop a perfect thin crust. The place also gives customers the option to build their own pizza using cheese, beef, chicken and vegetables but then they’re responsible for the taste.

The sandwiches seemed to have interesting flavors like chicken with cranberry, the zucchini baguette and hunter beef sandwich but the Turkish breads seemed rather unique and interesting to me. The last time I saw that shape was in Istanbul and figured I could do a quick escape from reality. They come in different flavors including Za’atar, Mediterranean, Shakshuka Hunter Beef, Mince bread and Spinach puff.

We tried the mince bread and the Za’atar and both were high on flavor in their own unique way! The bread was practically melt in your mouth.

Samreen Ahsan Bhatty, owner and mastermind behind Sidewalk told Instep that this pop up cafe is going to be in Kohsar Market for 3 to 6 months at most. So what happens next?

"Well, it’s a pop up cafe, it will move elsewhere in the city but more than an eatery Sidewalk is a brand that will ensure its products are available at various pick up points in the city. The pizzas are already available for delivery and can be ordered at home too. We’re specializing in a variety of breads, which will be up for grabs at different points in Islamabad to make sure they are within everyone’s reach," she said.

Talking about the current product line, she shared that the menu is limited to keep the quality high and the prices low. "We are serving good quality deli food at decent bakery prices because we want to encourage people to walk in at any time and grab food while they are on the go!"

The filled doughnuts were delicious; they come in various flavors including Nutella, vanilla and salted caramel. They reminded me of the yummiest doughnuts at Bread Ahead Bakery in London. I’ve been told the Cronuts are delicious too and I’m going to visit again soon to try them out. From the looks of it, they looked exactly like the ones at Dominique Ansel Bakery so I have high expectations.

This pop up cafe is a place that screams the word millennial! It’s just the right place for millennials of all ages - the ones who escape work to grab a quick sandwich during their lunch break, the ones who run from university to satisfy their sweet tooth and even the younger ones who talk their parents into getting them doughnuts right after school!