"BJP is a product of our own prejudices and policies" 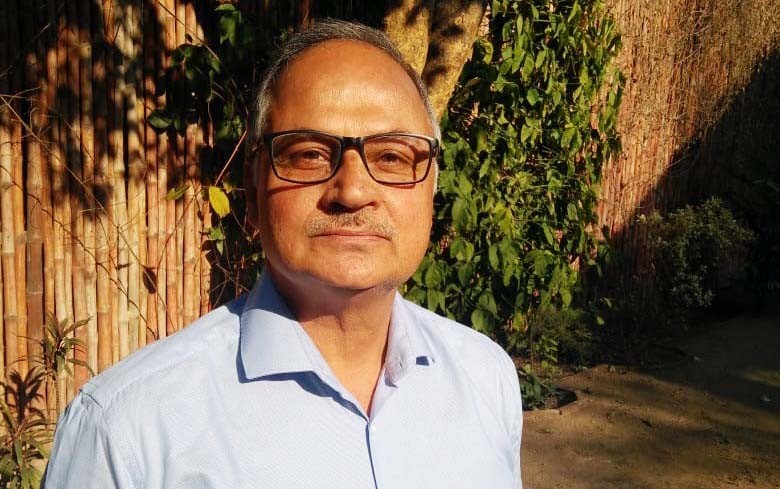 Born on the historic day of March 23, Sukirat Singh Anand is 63-year-old this month. His maternal grandfather was Gurbaksh Singh of Preetnagar fame and his father Jagjit Singh Anand, a diehard communist, was editor of Nawan Zamana (a magazine of CPI) for several decades. He spent 24 years in Moscow from early 1970s till late 1990s and witnessed the transformation in Russia. In the 1970s, being an international student in Moscow, he wrote a few letters to his communist father in India and pinpointed the shortcomings of Soviet society. When he returned in late 1970s, he tried to share his experience with the CPI leaders but no one was ready to listen to him. He wrote a book My years in Russia; A Time to Remember and recorded his memoirs. The News on Sunday interviewed Jalandhar-based Anand Singh when he visited Lahore a few weeks back.

The News on Sunday: You have a strong political background. Tell our readers about your maternal grandfather and father?

SSA: My maternal grandfather Gurbaksh Singh belonged to Sialkot. He spent four years (1920-24) in the US to study engineering. After his return, he joined Railways. In 1933, he started a Punjabi magazine Preet Larri. Due to his professional background and experience in Michigan, he wanted to build a unique housing scheme -- Preetnagar -- for Punjabi writers and poets. In order to fulfill his dreams, in 1939 he bought a piece of land at a place between Amritsar and Lahore. At that time, Amritsar was an important city but Lahore was capital of the united Punjab. In that housing scheme, he wanted to introduce a modern sanitation system. His attention for a modern sanitation system was a byproduct of his humanitarian-cum-progressive approach towards those low caste people who were called Churas. Built in early 1940s, it was the first housing scheme that had modern sanitation system. Many writers like Amrita Pritam, Balwant Gargi, Kartar Singh Duggal, Darshan Singh Awara etc started living there. He also founded a coeducation school there that was activity based. Personalities like Pandat Nehru and Tagore visited it.

TNS: Was it a sponsored project?

SSA: My grandfather did not take help from the government. He made a cooperative society in Lahore "Sansar Pareet Mandal" and under its guidance writers invested for their homes. It was a rural area so the land was very cheap. In 1947, when the Punjab was divided, Punjabi writers too lost their unique housing scheme. Many local players were involved in the destruction of Preetnagar and it was propagated that my maternal grandfather was an atheist and pro-Muslim. Some people were against him due to the coeducation school. In that atmosphere, it was difficult for him and the Punjabi writers to stay there. So they shifted to Delhi. After three years, he returned with Nanak Singh, another Punjabi writer. But majority of the writers did not come back due to various reasons.

Gurbaksh Singh had contributed a lot to modern Punjabi prose and introduced many new words. Interestingly, he was not a communist and never ever joined the CPI, but he produced many communists in the East Punjab. Brother of my mother Novtej Singh, who was in CPI, and my father Ajit studied in FC College Lahore in 1939. My father was president of Lahore Student Union that was an organisation of Punjabi comrades.

After the 2nd Communist Congress (Feb 1948), the government of India had banned CPI and the Nehru government had arrested many communists, including my father. My father was among the three editors of a communist weekly newspaper Jang-e-Azadi. At that time, Lahore was the press centre so it was published from Lahore too. But after partition, Hindi Gurmukhi press shifted from Lahore to Jalandhar. So CPI decided to relaunch Jang-e-Azadi with a new name Naya Zamana in Urdu in 1953 as a daily newspaper. But in three years, they had realised that in East Punjab there was no readership of Urdu so they had converted it to Gurmukhi Punjabi with another name Nawan Zamana in 1956. My father remained its chief editor for more than five decades. He died in 2013.

TNS: Your grandfather started a Punjabi magazine and contributed for modern Punjabi prose. What is the future of Punjabi language?

SSA: Punjabi has two scripts -- Gurmukhi and Shahmukhi. Punjabi is the worst victim of communal divide. In Indian Punjab, after partition, communal divide did not stop and in the first census of 1951, Punjabi Hindus were instructed to register Hindi as their mother tongue. In both Punjabs and elsewhere more than 200 million people speak Punjabi. It is high time for Punjabis to rethink about the future of their language. It is the duty of the universities to accept this challenge in both Punjabs.

TNS: Where did you get your early education from?

SSA: As my father was editor of daily Nawan Zamana in Jalandhar, I got my school education there. After high school, I joined DAV College. At the age of 17, I went to former USSR in 1973.

TNS: For how long did you stay there?

SSA: I did my masters in economics and remained there till late 1970s. I returned to India but soon got a job in an Indian company Chinar Exports who wanted a man who knew Russian and could run their office at Moscow. Due to that job, I remained in Russia till 1971.

TNS: As someone who spent many years in USSR as a student and business representative, you witnessed the transformation from USSR to Russia. What were your feelings?

SSA: I have written my memoirs My years in Russia: A time to Remember and discussed it extensively. I wrote that book first in Punjabi and then translated it in English too. It was largely an internal transformation.

We started treating Indian Muslims as Pakistanis. It is often said that in India-Pakistan cricket match, they always support Pakistan. It affected the Indian Muslims a lot. Films, media and education played a huge role and exaggerated the animosity.

TNS: Unlike Congress in India and PPP in Pakistan, why did the communists fail to attract the masses?

SSA: Religion and caste system has deep roots in our society, especially in its traditions and values. The issue was how to resolve the  riddles associated with religion or caste system. But in subcontinent, the communists remained adamant on its rejection only. Due to that negligence, they failed to attract masses at large scale. One of my Dalit friends told me about prejudices he had to face in the Communist Party due to his lower class background. In India, you will not find many leading progressive women among communists. In the past, their percentage was very thin. Our old generation communists were supporters of women rights but their understanding of feminism and sexuality was not progressive. Same was the case regarding minorities or transgenders. They claimed that when class question was resolved, things would change automatically. Such stereotypical ideas largely damaged progressive thoughts.

TNS: We often blame others for our own sins. Rise of religious fundamentalism and extremism in Pakistan and India is a product of our own policies, shortsightedness etc. Do you think BJP or Modi is product of any foreign conspiracy or it is an Indian product largely?

SSA: It is a product of our own prejudices and policies. I have witnessed the breakup of USSR. It is often considered as an American conspiracy. But those who have a clear understanding of the Soviet society know why it happened. Similarly, in India we had allowed the mushroom growth of RSS type militant religious forces and BJP is its ultimate result.

TNS: Was it ignorance or part of statecraft? If you use a monster against opponents than one day that monster will bite you. I think both in India and Pakistan we use such groups intentionally.

SSA: It is true largely. Establishment uses it, but secular, liberal and progressive forces are also responsible for this situation. Anti-India campaigns in Pakistan and anti-Pakistan campaigns in India have strengthened religious fundamentalism across borders.

TNS: Pakistan-India animosity grew after the 1965 war when both the countries started a cold war and it was mainly fought through art, culture, media and education etc. Do you agree?

SSA: Yes, we started treating Indian Muslims as Pakistanis. It is often said that in India-Pakistan cricket match, they always support Pakistan. It affected the Indian Muslims a lot. Films, media and education played a huge role and exaggerated the animosity.

TNS: How will this stop?

SSA: Writers and filmmakers can play a vital role in this regard. In both countries people, especially youth, have no information about each other. A few years back, a Lahori friend visited me. After his departure, my driver Hans Raj astonishingly told me that your friend was a Muslim Pakistani but his Punjabi was very fluent. Hans did not know that his mother tongue Punjabi is the biggest language of Pakistan and more than 120 million people speak Punjabi and majority of them is Muslims. So lack of information and negative propaganda are vital issues.

TNS: We are living in the age of information. Social media acts beyond borders. Such iron curtains cannot work anymore. What do you say?

SSA: Social media is a double-edged weapon. Narrow-minded people are using it for their interests but we can also use it positively. We will have to create more spaces and it will work.

This article has been edited, in order to make corrections in names

"BJP is a product of our own prejudices and policies"