Before TLP and MML, there were Jamaat-e-Islami and Jamiat Ulema-e-Islam 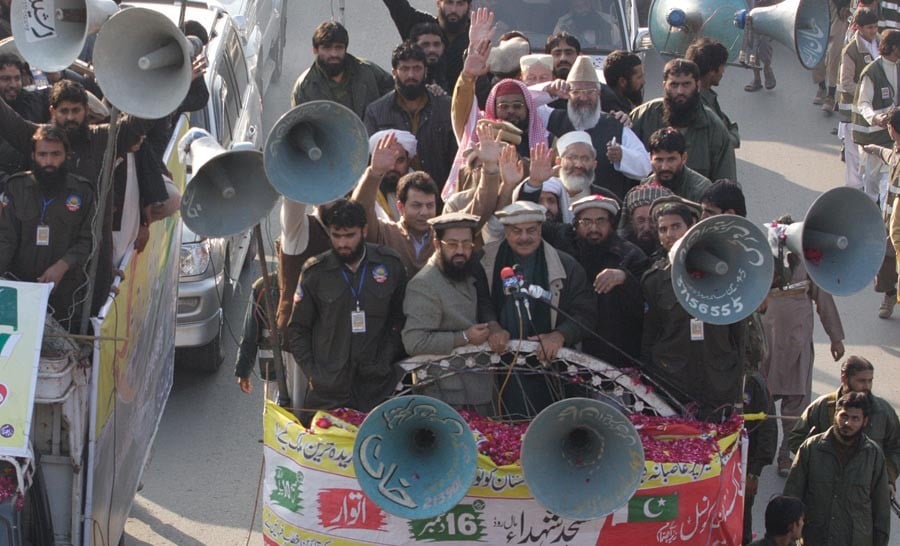 The by-election of NA-120 held in September 2017 on the ousted Prime Minister Mian Nawaz Sharif’s vacant seat saw two hardline groups -- Tehreek-e-Labbaik Pakistan (TLP) and Milli Muslim League (MML) -- enter the country’s body politic, grabbing the third and fourth position respectively with 11 percent collective votes. TLP was established in August 2015 as a political party. Its leadership and members represent the Barelvi School of thought and stress on continuing the legacy of Mumtaz Qadri.

In October 2017, a debate started in the country after stories came out that the government was considering to integrate Jamaat-ud-Dawa (JuD) into the country’s mainstream politics. JuD promotes the Ahl-e-Hadith interpretation of Islam. JuD was founded in 2002 after the Pakistan government banned Lashkar-e-Taiba (LeT) -- military wing of Markaz-ad-Dawa-wal-Irshad (MDI). Hafiz Saeed announced a split between Let and MDI and changed the MDI name to JuD.

Reuters reported that a plan was presented to the then prime minister, Mian Nawaz Sharif, to integrate some hardline groups into mainstream politics but he had rejected the plan.

However, within two weeks of Mian Nawaz Sharif’s ouster in July 2017, the formation of MML was announced backed by Hafiz Saeed and his JuD. Without facing any resistance from the government, Hafiz Saeed kept holding public rallies before and during the election campaign.

The Election Commission of Pakistan (ECP) rejected MML’s application to enlist it as a political party for the July 2018 general elections on the basis of recommendations received from the foreign office and intelligence agencies.

Nevertheless, that step could not stop the MML from fielding its candidates in the July 2018 election. This time, 265 candidates were fielded from Allah-o-Akbar Tehreek’s (AAT’s) platform, including Hafiz Saeed’s son Hafiz Talha Saeed and son-in-law Hafiz Khalid Waleed -- candidates for NA-91 (Sargodha) and NA-133 (Lahore) respectively.

Once again, the debate about mainstreaming extremists has started in the country. The question is, can extremism and politics co-exist? Hasan Askari Rizvi, senior political analyst, is not convinced that the idea of "mainstreaming" would work.

Talking to TNS he says extremist organisations have not publicly revoked their ideology, nor have they dismantled their armed and welfare infrastructure. "Therefore, it is clear that they would create more space by maneuvering with the concept of ‘mainstreaming’. This would certainly be a window of opportunity for them to make extremism part of mainstream politics."

Mobarak Haider, author of Tehzeebi Nargasiat and Taliban; the Tip of a Holy Iceberg expresses similar concerns, "The point of concern is the registration of extremist political parties, such as TLP and AAT even though the National Action Plan (NAP) 2014 clearly instructs the government to take measures to bar religious extremist parties."

Haider believes the concept of mainstreaming must be clearly defined. "If the objective of these hardliners is to serve the people and accept values of a political democratic process, they should promote the freedom of speech and debate, accept disagreement and convince the public on their given political agendas. Otherwise, the decision-makers of the mainstreaming concept would allow hardliners space to maneuver accordingly."

Jamaat-e-Islami (JI) and different factions of Jamiat Ulema-e-Islam (JUI) have been part of the political process and won seats of the legislative assemblies.

Head of JUI-S, Mualana Sami ul Haq, was known as the "Father of Taliban" for having taught some of the Afghan Islamist movement’s leaders in Darul Uloom Haqqania. Mullah Muhammad Omar was among his students who went on to found the Taliban group, seizing power in Afghanistan in 1996. Haq remained member of the Senate of Pakistan from 1985-1991 and again from 1991-1997.

Hasan Askari points out that JI and sections of JUI have remained part of the political process. Though their politics is religion-centric, they never got involved directly in any violence or sectarianism in Pakistan.

Husain Haqqani, former ambassador of Pakistan to the United States and an academic, wrote in his research paper, The Ideologies of South Asian Jihadi Groups: "Although Jamaat-e-Islami can be described as being sympathetic to the aims of various Jihadi movements, but it has taken care not to cross the line from being primarily an ideological-political movement. The founder of Jamaat-e-Islami, Abul Ala Maududi described the political system of Islam as "theo-democracy" -- a system in which officials would be elected but would be subject to divine laws interpreted by the theologically learned."

According to Mobarak Haider, JI and most of the JUI factions believe in the "act of preaching", meaning they practise democracy by convincing people on their presented agendas. "Though these parties don’t allow disagreement and freedom of speech but they still try to be part of the political process. However, when these parties couldn’t achieve what they wanted, they joined hands with those powers from whom they could get some benefits," he remarks. "That approach might have served them for a short period of time but created a vacuum for the groups that were stricter hardliners in their approach."

Both Askari and Haider are convinced that violent extremism, sectarianism, radicalism and politics cannot co-exist. If the parties are unwilling to practise democratic values, the concept of mainstreaming becomes nothing but a delusion.