What made Aurat March possible? 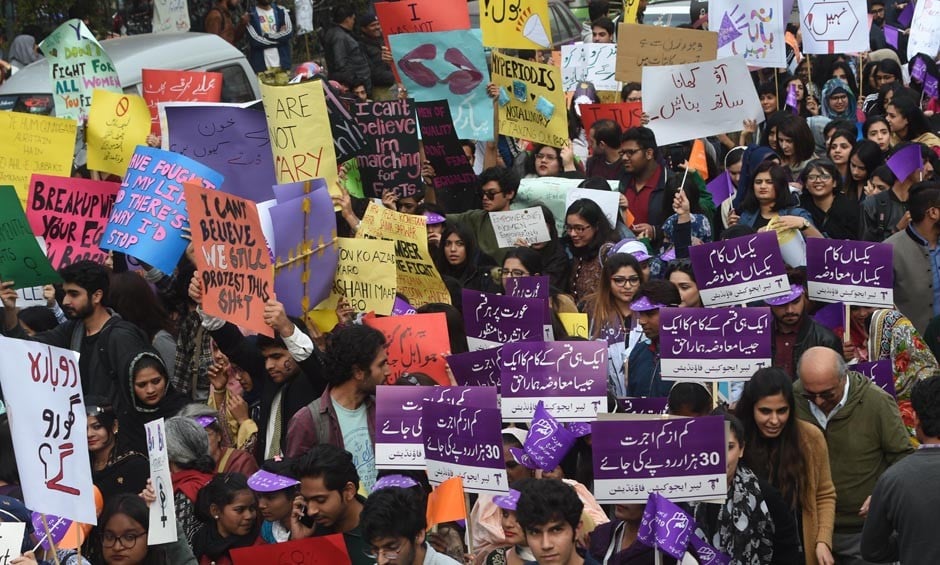 The chants of ‘Mubarik ho, Beti huwi hai’ (Congratulations, a girl child is born) and ‘Ayi, ayi, Aurat Ayi’ (Women have risen up) echoed in the air as participants of the Aurat March emerged from one side of the roundabout at Shimla Hill onto Lahore’s Egerton Road.

With the Press Club in the vicinity, demonstrations and sloganeering is part of the area’s routine. However, the March 8 gathering was different. Women, young and old, carried placards with witty takes on misogyny, patriarchal control of their bodies and gendered division of labour in households, giving the impression of a protest. Yet, the anger fueling those statements was complemented with a sense of celebration, as the participants danced and sang, while claiming the public space for an inclusive collective of cis- and trans-gender women and men.

Also visible was a palpable sense of synergy between a younger generation of feminist activists and the ‘old guard’, including many iconic figures from the Women Action Forum (WAF).

In fact, part of the reason why Hum Aurtein, a collective of women who organised the march in Lahore and Karachi, picked purple colour for flags, shawls and dresses was because of its association with WAF as well as the International Women’s Day, said an organiser in Lahore.

Now in its second year, Aurat March was started by Hum Aurtein in Karachi. An organiser of the Karachi rallies recalled that meetings had continued across the city for over two months to build momentum, leading to formation of an organising committee of 30 women.

In Lahore last year, several activists had heard about plans for the rally at the last minute. However, with quick preparations, they managed to put together a modest show.

This year, the planning started well in advance, with the first meetings held as early as November 2018. Timely outreach enabled the collective to gather a much bigger crowd in both cities.

The team in Karachi had an organising committee of over 90 women this year. Mobilisation went on for months, and included visits to different neighbourhoods and forming of relationships with communities in Lyari, Rehri Goth, Ibrahim Hyderi, Korangi 1 ½, Zia Colony, Mauripur, Hawksbday, Saddar, and Garden Road, said the organisers.

Meanwhile, the social media platforms were used to spread awareness about the manifesto, a set of broad-based demands that emerged from conversations among diverse groups including women health workers, domestic helpers, nurses, street hawkers, as well as captains with ride-hailing social media apps.

The organisers emphasise that Hum Aurtein is a non-hierarchical collective ‘evolving based on issues we face in our activism’. They’re very particular about dissociating themselves from political parties, non-government organisations and corporate entities.

"It is important to emphasise that the march is not funded by any political party, NGO or corporation. We made special efforts to ensure all contributions came from concerned individuals. The smallest contribution was Rs150," they said.

Between the 2018 march and this year’s, several members got together and formed a more structured group, Aurat Haq. One of the organisers involved in Aurat Haq’s formation said, "the year was devoted to recruiting members and building on the ideology". The group also made some chapters, and held two events to discuss ways to take up issues highlighted in the march.

This year, rallies were also held in various other cities under the banner of Aurat Azadi March. These were organised jointly by Women Democratic Front, a socialist-feminist organisation, and WAF.

Alya Bakhshal, a WDF activist, said the Front has been active for four years, holding street theatre and rallies to raise awareness about women’s rights. Last year, several WDF members attended the Aurat March in Karachi. "The decision to hold a separate march in Hyderabad this year was taken to enable women from interior districts to also participate in the event," she said.

Bakhshal said the organising committee formed ahead of the march, including journalists, lawyers and academics, has been kept intact so that it can take up issues related to women’s rights as they emerge.

Where March 8 rallies have generated debate on important issues, the participants have faced backlash on social media platforms from troll armies and self-anointed guardians of public morality.

The organisers recall receiving similar backlash last year, but the scale is larger this time. Several participants had to even temporarily de-activate their accounts.

When some of the organisers in Lahore reached out to a few of these pages posting material against marchers, they learnt that the administrators had been prepared well in advance to counter the Aurat March at online platforms.

Having learnt their lessons from last year, the organisers too were better prepared. They even held workshops on combating cyber harassment. "We learned how to report online harassment, and came up with an action plan to minimise its impact," said an organiser in Karachi.

"We also asked media houses to get consent of participants before taking their photos."

However, vague policies of social media platforms have caused problems on occasions. A participant of last year’s march in Lahore found her in trouble at home after her photo, in which she was carrying a placard saying ‘my body, my choice’, was made viral on social media by trolls.

The participant had given her consent to be photographed, but she didn’t foresee cyber harassment so she approached the organisers for help. Facebook was contacted, but the request was turned down on grounds that ‘it didn’t breach our community guidelines’. "Eventually, they agreed to remove the image, though not as a harassment issue, but as an issue concerning privacy," the organisers said, adding that since then they have engaged with the social media platform and convinced it to change some of its privacy policies. However, they said, the policies remain vague, requiring consistent efforts to monitor and remove content being misused by bullies.

"Removal of doctored images was, however, made easier due to revisions made in the wake of the fake news controversy surrounding United States presidential elections," they said.

Some of the content against the march was straightforward incitement to violence. An online video denouncing the march has the chilling words ‘we will make sure these women end up in their graves’.

Nida Kirmani, a sociologist who studies gender in urban settings, noted that the backlash can be seen as a manifestation of the growing ‘crisis of the patriarchal order’. "The fact that more women are entering the workforce and questioning the division of labour within the home is causing a great deal of anxiety amongst many men, and even some women.

"While women’s employment rate remains relatively low in Pakistan, it is growing, and women’s educational levels have also grown exponentially. This means an increasing visibility of women in the public sphere," she said.

Even though it was a completely indigenous endeavour in terms of its organisation and the issues raised, the Aurat March may have been inspired by the Women’s March that took place in reaction to the Trump presidency in the US, Kirmani said, adding that the #MeToo movement had also contributed to conversations about sexual harassment in the country.

There have been several waves of feminist activism in Pakistan, most notably the emergence of WAF during the Zia era. "While the most recent wave was not prompted by a similarly repressive situation," Kirmani said, "it was still a continuation of the struggles underway in the subcontinent since the colonial era.

"The young women of today, even if they don’t know it, have been influenced by the earlier generation of feminists."

Meanwhile, she said, "the younger generation was more aware of the need to be inclusive across the gender spectrum, and hence there was more active participation of trans-women."

Kirmani hoped that in coming days there would be greater debate on issues raised in the manifestos drafted by the organisers of the rallies.

She also urged the participants to critically reflect about who participated in the marches and who was excluded. "While there were women from across the class spectrum present, we still would have wanted more women to have participated from the working and lower middle classes. We also strive to be inclusive of people from various ethnic backgrounds. This is something I would like for us to critically reflect upon and have more dialogues about, rather than just dealing with the sexist backlash on social media."

What made Aurat March possible?