At home in Burma 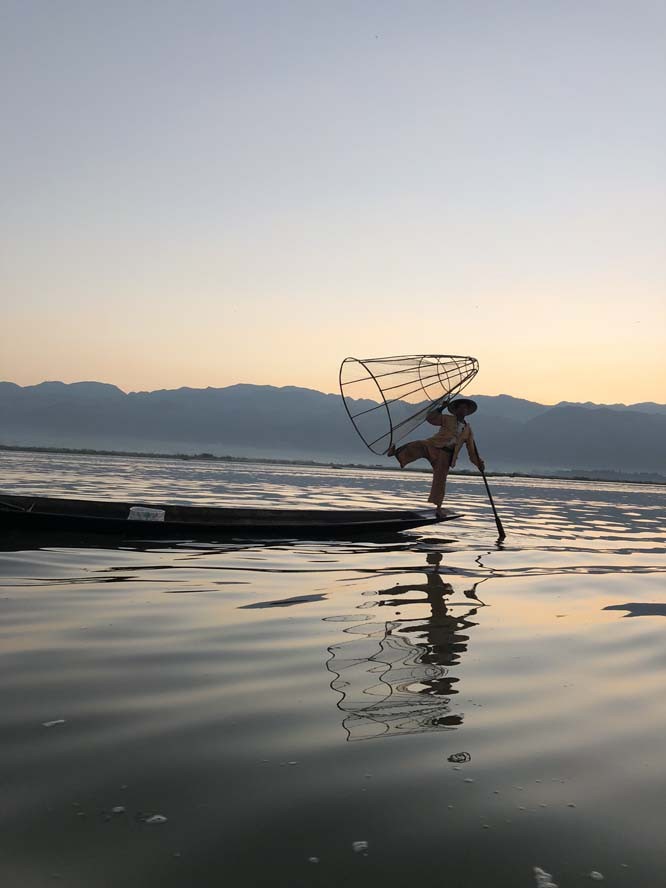 After a few weeks at home, we were back on the road. We landed in Myanmar, where the borders between South Asia and Southeast Asia begin to blur. At Yangon International, we were picked up by a college friend and taken directly to one of the city’s ubiquitous teahouses for breakfast. He ordered a palata (paratha) and naan with daal and malai on the side. We sat back, partly jet-lagged but mostly thankful to be with someone who could order off a menu in the local language.

Over the next few days, we continued to revel in the benefits of this friendship. We no longer had to spend a section of the day checking travel blogs and Google Reviews to pick restaurants that were good, packed with enough locals and not too many tourists (like ourselves). We drove around on Yangon’s oddly quiet streets, getting background stories that never come in Lonely Planet guides. Car imports were effectively banned until 2011 and carried heavy permit fees for many years afterwards, leading to very little road traffic compared to similar-sized Southeast Asian cities. Driving on the right side of the road in a right-handed vehicle, our friend told us that until 1970, everyone drove on the left side. A former dictator changed the rule overnight because his astrologer said the country had moved too far to the political left.

The problems Myanmar continues to face, effects of decades of military rule and continued entrenchment in politics, have been the focus of much global attention. Talking to our friend and his social circle in Yangon, comprising of many repatriates who had studied abroad before returning to Myanmar, we observed optimism about the future, a sense that the country was about to see exponential growth in industry, consumption, and real estate.

I also noted many similarities between Pakistan and Myanmar, some gifts of the British Empire, others evidence of shared heritage that goes back to the Buddha. We visited the tomb of Bahadur Shah Zafar, where a friendly guide who spoke Urdu showed us around. The tomb has now acquired the status of a shrine for Muslims, and it was surreal to see verses: (attributed to Bahadur Shah Zafar but actually written by Seemab Akbarabadi -- ed) I had read as a kid inscribed on the walls.

We visited Yangon’s majestic, where worshippers sat with their legs tucked underneath, making sure not to point their feet towards the pagoda. I was reminded of my childhood, of getting scolded for leaving shoes with their soles facing upwards, jeering at the heavens.

Perhaps my presence in a Burmese teashop was akin to the white female bikers and bloggers traversing Pakistan, claiming a level of comfort that Pakistani women rarely feel. Travelling to places where you have little sociocultural context can be exhilarating, allowing you to experience that world with fewer preconceptions and thicker abandon.

As we travelled up the country, from Yangon to Mandalay to Shan State, the food culture shifted around us, replacing Indian elements such as palatas and curries with Chinese influences in the form of noodles and soups. The one thing that remained constant was the proliferation of Myanmar’s tea culture. During our five days in the old imperial capital of Mandalay, we moved from one teahouse to another, some packed with chain-smoking men and others lying empty in the midday daze. We had several cups of chai made the Burmese way--brewed over an open fire and mixed with generous quantities of condensed and evaporated milk. Wood is cheap in Myanmar; even in big cities, restaurants use it for cooking.

In Mandalay’s teahouses, I realised that I was partaking in a culture that had always existed back home. These shops were Burmese versions of dhabas, establishments whose main business was tea, where the main pleasure was idleness. I felt the heavy weight of envy. So, this is how it felt like to be a man in Pakistan--to sit without purpose, to carelessly order another cup of tea because the desire to linger had not yet passed. Wherever I had been in my travels throughout Southeast Asia--Indonesia, Cambodia, Vietnam, and Myanmar--I had taken pleasure in shrinking into anonymity and observing the world around me in establishments like these. This stood in stark contrast to Pakistan, where the impossibility of quiet observation appears like a wall at times. It is hard to look around when you’re the object being constantly looked at.

From Mandalay, we took a 4 am train to Hsipaw that passed through a historic viaduct and quiet villages capped by hilltop temples. At Pyin Oo Lwin, the old summer capital of British Burma, we sat in a teashop near the railway station as dawn broke. Most of Myanmar wakes up with the sun, and the roadside shack was full of people starting their day. They sat huddling under blankets in the fog, waiting for their tea and plates of e kya kway, fried hollow bread that is the best dipping accompaniment to chai I have ever found.

I noticed that while there were several women in these teahouses, most patrons were still men. In rural parts of Shan State, the number of women dwindled even more, along with the number of tourists. I caught more and more people looking at me with curiosity, and I often smiled and waved, not made uncomfortable by these stares the way I would back home.

Perhaps my presence in a Burmese teashop was akin to the white female bikers and bloggers traversing Pakistan, claiming a level of comfort that Pakistani women rarely feel. Travelling to places where you have little sociocultural context can be exhilarating, allowing you to experience that world with fewer preconceptions and thicker abandon. The issue arises when the tourist begins to take her own experience as representative, instead of accepting it as a charming yet inconsequential sliver that speaks little to the nuances of the society around her.

During the rest of our time in Myanmar, we visited the ancient city of Bagan, where countless temples imprint onto a dusky sky each evening. We went to Inle Lake, where the mist rises at dawn and fishermen work in silence, where tomatoes grow on water in carefully designed floating gardens. Myanmar was the last country we visited in Southeast Asia, and it felt like the most charming one we had seen. Perhaps it was the kind of beauty I have been trained to appreciate most deeply--the beauty of rivers and lakes, of solitary walks down empty streets, of chipped white teacups.

At home in Burma