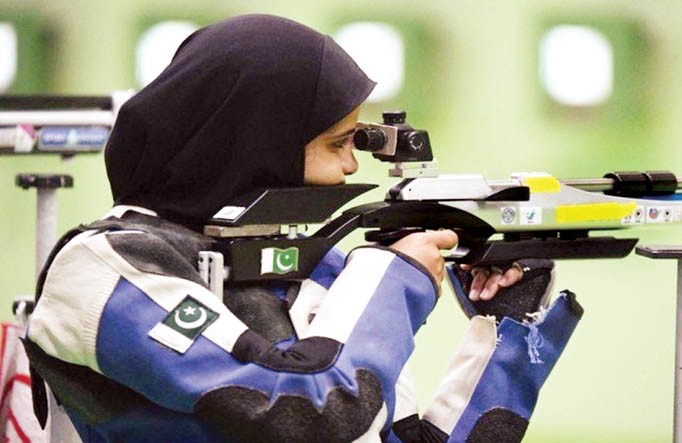 India is having a torrid time these days. Of course, it began after that unfounded announcement that they had avenged the Pulwama killings with a surgical strike inside Pakistan, "wiping out 350 terrorists". Soon, they were humbled by the downing of their two fighter planes by the Pakistan Air Force and the capture of a pilot.

The big military setback was followed by humiliations on so many fronts: diplomatic, economic, domestic political scene, loss of credibility internationally. The list is never ending.

It has extended to the sporting front as well. India is getting one snub after another.

It started with the IOC cancelling places for the 2020 Olympics shooting competition to be awarded at an event in the Indian capital New Delhi after the host country refused to give visas to the members of the Pakistani contingent.

"This situation goes against the Fundamental Principles of the Olympic Charter," the IOC said in a statement.

"Equal treatment must be guaranteed for all participating athletes and sporting delegations at international sports events, without any form of discrimination or political interference from the host country," the statement said.

Beyond the shooting competition, the IOC said it was suspending all discussions on potential future hosting of Olympic-related events in India until it received "written guarantees" from the government that the country would comply with IOC rules.

Furthermore, the IOC said it was also advising federations to "neither award to nor hold sports events in India until the above-mentioned guarantees are obtained."

It is pertinent to mention that there are 73 international sports federations recognised by the IOC. The advice has already brought repercussions.

United World Wrestling (UWW) has asked all the national federations under it to stop communication with the Wrestling Federation of India (WFI).

The WFI President Bhushan Sharan Singh has expressed fears that it might jeopardise India’s chances of hosting the Junior Asian Championships in July at Delhi.

An Asian Tour 10 reds snooker tournament, to be held in the South Indian city of Bengaluru in March was called off, after five Pakistani players and Ahmed Saif, a Pakistan-born Qatari player, were denied visas by the Indian government.

Now to cricket where there is a perception that ICC is virtually run by the BCCI. Probably this conceit led the BCCI CEO Rahul Johri to ask the ICC to urge member boards to boycott Pakistan in the wake of the Pulwama terror attack.

Johri wrote to the ICC, "This communication is being addressed to voice the BCCI’s concerns and sentiments that have emerged after the recent dastardly terrorist attack which was carried out on Indian soil by a terror outfit based out of Pakistan, which resulted in the death of Indian security personnel."

The ICC rebuffed BCCI, plainly saying the ICC has no role to play in matters like these.

There are also voices from some distinguished former Indian cricketers including Harbajhan Singh, Gangulay and Azaharuddin that India should not play Pakistan in the coming World Cup. Indo-Pak match is scheduled at Old Trafford on June 16.

Even that demand seems to have died down mainly because of the opposition from the saner elements among the Indian cricket fraternity itself.

Hopefully, this will now embolden Pakistani sports officials who have displayed cowardice in the past.

One remembers Pakistan supported the Big Three governance system in 2014.

The PCB chief Shaharyar Khan made it clear that Pakistan had supported the Big Three governance system in 2014 because India had signed an MoU with them that they would play six bilateral series between 2015 and 2023. India never honoured that MoU.

PCB decided to take a legal course and went to the International Cricket Council headquarters, demanding 70 million dollars in compensation from India.

The BCCI said they are unable to play against Pakistan until their government gives them permission and dismissed the agreement as not legally binding.

The ICC Dispute Resolution Committee dismissed PCB’s claim on the ground that the agreement signed between the boards carried a "moral obligation" but not a legal one.

PCB was even directed to pay 60 percent of the costs incurred by the BCCI and the ICC panel during the two boards’ legal wrangle.

Had PCB shown some courage – signing an agreement legally binding on the BCCI instead of a useless MoU – Pakistan would have been spared this double mortification.