All about literature and history 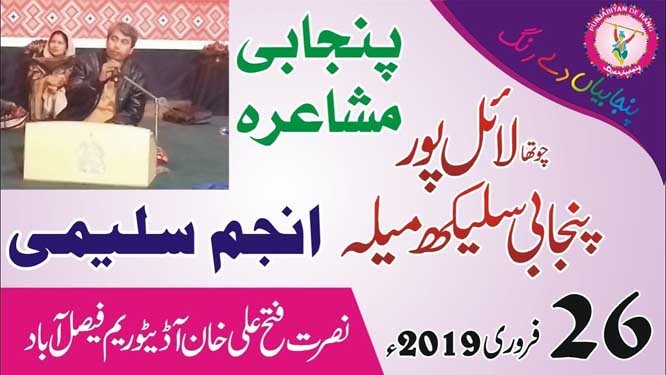 The two-day 4th Lyallpur Punjabi Sulekh Mela 2019 (February 25-26) was dedicated to Jallianwala Bagh (100 years) and Baba Guru Nanak (550 years) with discussions focusing on how the British killed and terrorised Indians after the 1857 war of Independence. Indians were tied to cannons and hanged by trees.

At Jallianwala they thought that by killing innocent, unarmed and peaceful civilians they would be able to create terror among the Indians and suppress them but its impact was absolutely opposite. The massacre and introduction of Rowlatt Act united the follower of all religions -- Hindus, Muslims and Sikhs -- on one platform. The Khilafat movement was so widespread and intense that the tactics of humiliating and terrorising the Indians miserably failed and the British were even willing to offer dominion status to India but Gandhi called off the movement and missed the opportunity. This was the last united movement by all the Indians against the British domination.

Aamir Riaz, speaking at a session, observed that Congress and Muslim League were ‘Club’ parties which would write petitions and appeals to the British rulers, but this movement changed the complexion of these parties. He stated that Khilafat movement was a negative movement.

One panelist stated that British rulers were racist and they established ‘Gora Qabrastan’ in every city and would not allow local Christians to bury their dead there. "They had exclusive clubs where local Indians and dogs were not allowed. They had separate courts for British. Some of the Indians supported British despite the Jallianwala massacre and received rewards."

In a session about the ‘Contemporary Literary Trends in Punjabi Literature’, Prof. Abdul Aziz Malik opined that religious extremism and terrorism has crept in educational institutions due to Gen. Zia’s policies. Prof. Zubair Ahmad said due to absence of ideology, criticism in literature, particularly Punjabi literature, has disappeared.

Parween Malik stated that in Urdu literature one could find influence of international literary movements, but the Punjabi literature was devoid of it although during Gen. Zia’s period Punjabi writers used symbolism out of necessity. "Nasreen Anjum Bhatti and others wrote resistance poetry, but no big novel was written."

Nain Sukh observed that Punjabi writer is still victim of old definitions. "One should talk about contemporary world. Poetry has not developed because in ‘ghazal’ there is no new experiment, although many books are being published in Punjabi. Writers are doing new experiments in ‘nazam’ and novel. Critics should lead writers. Many books are being translated into Punjabi."

Prof. Ravish Nadim stated society is dead and there is no social, literary and cultural movement. "Urdu literature is attached to ‘Nazria Pakistan’. Instead of Dr. M.D Tasir, Syed Abdullah was made head of Oriental College."

Nain Sukh’s book Dharti Punj Daryaei was also launched. Nain Sukh explained some features of his book, saying he could not add a chapter about ‘Kanjars of Lahore’. Terming the book ‘People’s History of Punjab, Panelists stated that it was a very rich and important addition in Punjabi literature.

During a session titled ‘Role of Punjabi in Higher Education’, Prof. Pervaiz Vandal, Pro VC of Institute of Art and Culture, questioned can creativity be taught? "One has to do self-dialogue. The first step in this direction is decision-making and then execution. It can’t be done without mother language (Maan Boli), which is language of comfort. No art can be created without learning Punjabi." He shared that The Citizen Foundation (TCF) which established many English medium schools all over Pakistan for the children of
downtrodden reached a conclusion that initial primary classes should be taught in mother language. He gave the
example of great Professor Ruchi Ram Sahni (GC) who would give lectures in Punjabi.

Prof Dr Nasir Amin, VC of GCU Faisalabad, stated that after independence the establishment started doing experiments with language. "Urdu was declared national language. New generation is neither proficient in Urdu nor English. Punjabi was never a medium of instruction. We should adopt Punjabi as medium of instruction at primary level."

The concluding session was about the poetry of Baba Guru Nanak. The moderator was Khola Cheema and panelists were Mazhar Tirmazi and Iqbal Qaiser.

All about literature and history