Setting of women’s sport in motion 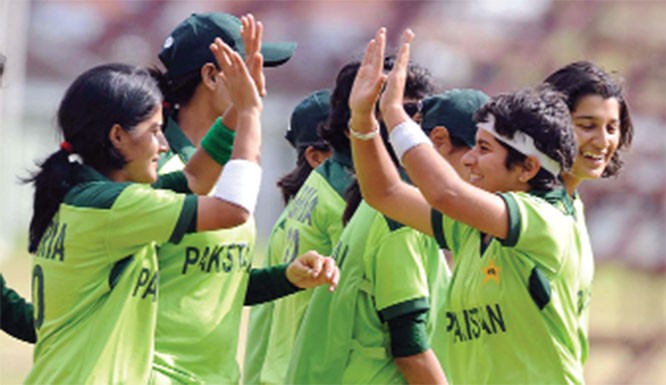 Cricket in the subcontinent is a huge phenomenon. The popularity of the game is such that it transcends all levels of society. In Pakistan, it is the favourite sport to watch and play and the current PSL fever is testament to that. However, it is only men’s cricket that is both religiously followed and fervently enjoyed by people. Women’s cricket, on the other hand, has not traditionally gained as much attention. In fact, this reality applies to majority of women sports. However, things have been changing for the better over the last couple of years as women’s cricket teams have drawn great female talent globally.

Australia’s Ellyse Perry and Stafanie Taylor from West Indies have become famous names in the cricket arena. While, Sana Mir rose to prominence after she became the first Pakistani female cricketer to rank number 1 in ICC ODI bowler ranking.

It is an encouraging sight; seeing women take active part in cricket. However, there are little opportunities for them to play organised cricket across the country. They lack access to those venues. Pakistan Cricket Board’s (PCB) Women’s Wing, established in 2005, spends an annual budget of approximately Rs 227 million for the promotion and development of the game.

PCB is currently in the process of establishing five academies in Lahore, Karachi, Multan, Abbottabad and Rawalpindi/Islamabad to be equipped with all the allied facilities and a professional set up to train women cricketers as per international standards. In addition, it has been arranging two to three international tours annually, which has helped in improving the overall performance of the women’s team. Bringing cricket back home will surely help the cause.

But more needs to done to develop the game at an international level in Pakistan. Under the current structure, women’s cricket in Pakistan has only One Day Tournament and T20 Tournament. There is a need to introduce long-form cricket comprising four to five days. Like men, women should get a chance to play matches as a part of test series in the presence of modern infrastructure. Sana Mir proposed lately that the introduction of a women’s version of PSL would be a great initiative to attract more female talent towards the bat and ball game. If the idea is materialised, it will surely enrich the sport in Pakistan.

To help the game grow globally, corporate sector can also play its role to support women’s cricket. In men’s sports teams, there’s always one big brand or the other supporting professional male athletes. Whether it’s through sponsorships or provision of resources, same needs to be done for female athletes to bring them into the limelight.

Public trusts renowned corporations and when they see companies investing in female sports, it automatically generates interest in the activity. Furthermore, it provides the brand an opportunity to show that it supports women making career choices of their own and being at par with men.

Recently, sportswear brand Nike celebrated the 30th anniversary of its ‘Just Do It’ campaign by creating a female-focused video called ‘Dream Crazier’ to convey a strong message about female athletes. Any woman attempting to break boundaries and creating a space for herself in a male-dominated arena is dismissed as crazy. Using this to its advantage, the brand redefined the otherwise derogatory label to show that a girl dreaming big and crazy is the one who makes it.

In 2014, the multinational consumer goods company Procter and Gamble (P&G) with its viral campaign "Always #LikeAGirl" tapped into the women sports market to show just how doing things "#LikeAGirl" should boost the confidence of girls growing up.

Similarly, ride-sharing giant Uber, in a bid to start a conversation around women’s sports partnered with International Cricket Council to organise World’s first T20 women’s championship in 2018, which was appreciated and acknowledged by leading sports persons across the globe.

A local advertisement airing recently on digital media platforms shows a number of girls telling each other about their love for cricket and how they will be willing to engage in the sport if only space becomes accessible to them. The gist of the ad is that women just need the right confidence to reclaim those public spaces and play their favourite sport.

When companies like Nike, Uber etc can showcase a testament that the company wants to empower women by instilling in them the confidence to play and opt for sports as a career choice, then other brands should stand with this initiative and follow suit. The sphere of women’s sports, especially in the developing world needs more of such partnerships to help break stereotypes and change societal attitudes towards women in sports. Both the brands have rightly said it "dream crazier" and "ignite opportunities".

Setting of women’s sport in motion