Arrive in Hanoi, hoping to spend four days there, instead, spend twelve 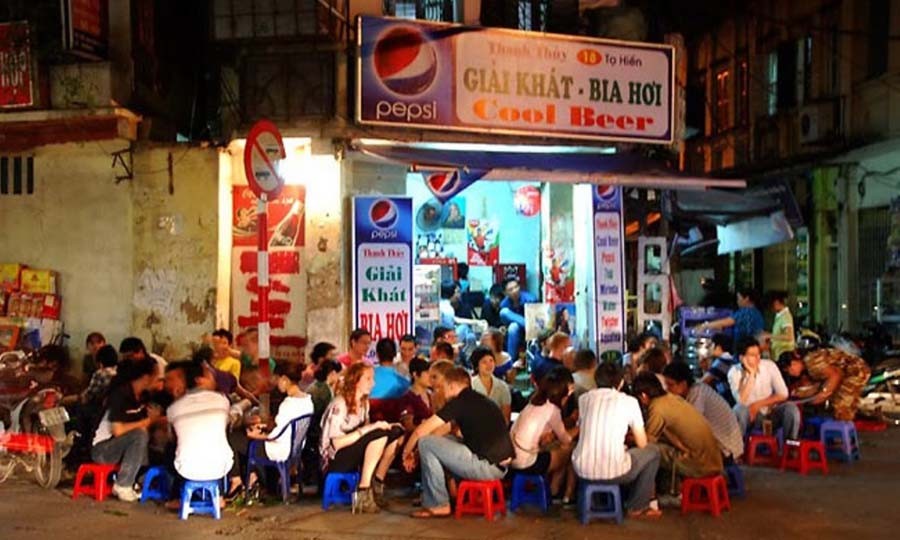 The sun is setting on a clear day in Hanoi. The railroad that cuts through the city is empty; it is a few hours before the night train will pass on its long journey to Ho Chi Minh City. Balconies wearing flowerpots and washing lines edge both sides of the path, so close to the tracks that an adventurous passenger could reach out and pluck a petal. Some tourists wander around, aiming for well-positioned shots of silhouettes set against the tracks. A young man runs a terrace café out of one of the houses, selling beer and iced coffee. A motorbike slowly makes its way there, gingerly balanced on the narrow path next to the rails. The young man’s wife disembarks. She is back from work, wearing a neat button-down and hair that flows down her neck like a black river. They embrace, and she sets off to help him with customers. The sun dwindles. French pop plays in the background. I sit facing the tracks, looking at the man, the woman, and their city.

We arrived in Hanoi at the end of our time in Vietnam, hoping to spend four days there. Instead, we stayed for twelve.

Before Hanoi, we had visited: Ho Chi Minh City, the country’s most popular destination and the old capital of South Vietnam; Hoi An, an old colonial town inundated with honeymooners and retirees; and Ha Long Bay, where we spent two nights away from land, surrounded by emerald water and the famous limestone karsts. By the time we reached Hanoi, we had spent several days playing tourist bingo. Overcrowded beaches -- check. Long train rides through the countryside -- check. Temples and museums -- check. In our last few days before heading home, we were determined to return to basics and reaffirm our foremost allegiance during travel, i.e. food.

The first morning, we woke up and walked down the street to a place selling pho, Vietnam’s most famous dish. The concept is simple enough: a soup made of beef stock and spices such as star anise and cinnamon, served with noodles and slices of meat. Hanoi takes this dish and turns it into a nose-watering, soul-warming feast. Our server ground a handful of beef, put it raw into steaming bowls of soup where it cooked in the heat, and served this alongside a basket of herbs and raw red chilies. December is warm in Hanoi, and within moments we felt our foreheads turn damp as we leaned over the bowls, our inelegant chopstick skills on full display.

Our time in Hanoi was a series of spectacular meals one after another, confirming a suspicion we had begun to harbour during our time in Southeast Asia. The best food in the world is made either by women or by small restaurants that are passed from generation to generation, specialising in one dish, perfecting the recipe over years. This explains why in private, segregated cultures such as Pakistan, Iran, and Morocco, the best food is always found at home. In Hanoi, we found a food culture that checked both boxes. Most street side restaurants specialised in one dish, and the person sitting at the helm, stirring the large pot of soup, was often a woman.

Food is almost never about food. It is about the weather; anyone who’s had pakoray and doodh patti while it rains outside knows this. It is about the people you’re with; who has ever had a great meal in miserable company?

One of the best meals I’ve had in my life was in Hanoi’s Old Quarters, where a middle-aged woman sat in a restaurant four feet wide, serving bowls of soup made by simmering freshwater crabs in a broth of tamarind and tomato, served with noodles, tofu, green onions, watercress, and basil. Before we left her place, we looked up how to say "delicious" in Vietnamese. Embarrassing ourselves by inevitably mispronouncing the word seemed like a price worth paying.

Yet, food is almost never about food. It is about the weather; anyone who’s had pakoray and doodh patti while it rains outside knows this. It is about the people you’re with; who has ever had a great meal in miserable company?

In Hanoi, we ate all our meals on the roadside, frequently on stools that rose a mere foot above the ground. We ate to the background noise of motorbikes and neighbours talking to one another. Often, we ate facing the street, observing a city that was kind enough to take us in and render us anonymous.

In Hanoi, the street is not only a public space where people congregate before returning to private abodes. The street belongs to the people of Hanoi. Their houses frequently open onto the road, windows and doors flung open in a flagrant rejection of the privacy we value so much in Pakistan. On weekends, the city centre seals itself off to vehicles and people pour onto the wide avenues by the lake -- college friends, young families, and grandparents.

For the past three years, I have mostly lived in New York, where families either move out after their firstborn arrives or spend weekends searching for kid-friendly bars and restaurants. In Hanoi, there was little apology about children; all spaces were kid-friendly spaces.

One night, Vietnam played the Philippines in a football semifinal. Restaurants and bars displayed large TVs for their customers, their seating overflowing onto the road. During halftime, when Hanoi’s policemen had time on their hands, they came around to disband these encroachments. Like well-oiled machines, the shop-owners made customers stand up, swooped the stools from below them, and gathered them all into tidy stacks. The policemen returned to watch the second half at their favourite bar, the stools were handed back to the customers, and the show went on.

Vietnam won the match and the city exploded. Thousands of people, red flags tied around their heads and wrists, went around the city centre with speakers in tow. People took turns getting on top of them to dance for the cheering crowds. Motorbikes raced by, the riders blowing plastic vuvuzelas. To get home, I ordered a bike ride on Grab, Vietnam’s version of Careem. Halfway through our ride, my bike driver had to stop at an intersection crowded with supporters. Missing no beat, he took out his own trumpet from inside his jacket and joined the crowd.

Also read: At home in Burma

For many people outside the country, Vietnam still remains synonymous with the American War and its haunting legacy of cruelty and displacement. During our time in Hanoi, we found instead a city that has its eyes firmly set on the future. Vietnam has Asia’s eighth largest population, with a large share of it being young people, and nowhere can you see that more clearly than in Hanoi; young people run restaurants, spill out of coffee shops, and roam the streets with inexplicable energy. Despite being a large city, Hanoi feels livable in a way most large Asian cities don’t; walking paths are abundant, and all neighbourhoods feel like small, self-contained cities on their own.

At the end of most travel, I am excited for the next destination and even more pleased to be home at the end. On our last day in Hanoi, a cold afternoon with intermittent rain, my husband and I walked around glumly, feeling the impending loss. During the next few weeks, surrounded by family and familiar foods, I would sometimes close my eyes and wish, if only for a second, that I was back in Hanoi -- sitting on a stool with my legs crunched up, leaning over a steaming bowl of soup, looking out at the world.