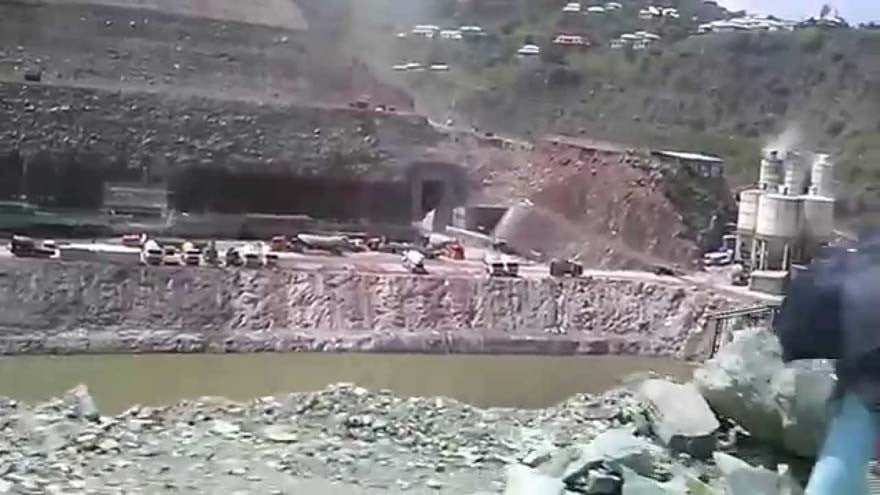 The mega hydropower projects with a cumulative capacity of more than 4500-MW have recently triggered heated debates and public uproar in Azad Jammu and Kashmir. The designs of major projects and issues related to rehabilitation or water usage charges/royalty have greatly soured the relationship between the governments of Pakistan and Azad Kashmir.

The month-long campaign against the proposed Kohala Hydropower in Muzaffarabad, the capital city of Azad Jammu and Kashmir, is rooted in institutional wrangling between the federal government and AJK. The Mangla Dam Raising Project in Mirpur, the southern city of AJK, is a glaring account of disregard of the official agreements and understanding between the two governments. Mirpur, commonly known as the financial capital of AJK and the "City of the Overseas", was built in the 1960s to accommodate the population displaced due to the construction of Mangla Dam.

The dam-affected community of Mirpur which left homes, properties and even graves of their loved ones are still struggling to obtain drinking and irrigation water rights from the dam. Yet in 2003, WAPDA proposed Mangla Dam Raising Project for which the then president, General Pervez Musharraf, spearheaded a public campaign within AJK and abroad to woo support of the overseas Mirpuris. He assured the people as well as the government of AJK that the federal government would guarantee the fulfilment of all demands such as the provision of water for drinking, irrigation and livestock, besides entrusting water tourism and fishing rights once the dam raising project gets completed.

In this context, a tripartite agreement between the governments of Pakistan, Azad Jammu and Kashmir, and Water and Power Development Authority was signed, known as the "Mangla Dam Raising Project" wherein AJK was assured of the provision of 126 cusecs drinking water (through executive order). It was also assured that the demand of 486 cusecs water for irrigation and livestock would be approved through Indus River System Authority (IRSA).

The government of AJK, in order to avoid any future dispute or misinterpretation, requested the federal government to issue a formal notification for provision of 126 cusecs drinking water for Mirpur city and its adjoining hamlets. The government of Pakistan, after consultation with the Ministry of Law & Parliamentary Affairs, issued a clarification in 2006 stating that "the approval of 126 cusecs drinking water is clear, unambiguous, expressive and final and needs no further approval". It put to rest the AJK’s concerns for a while.

Therefore, in order to develop a state of the art three-stage pumping infrastructure for smooth supply of drinking water, as promised in the agreement, WAPDA provided the required land at Jarikas while the Executive Committee of National Economic Council (ECNEC) approved seven billion rupees from the Federal Public Sector Development Programme (PSDP). With this budget, the government of AJK laid down a huge infrastructure including a 10-km-long water supply line, several water storage tanks, a water treatment plant, a pumping system and a housing colony for its staff. Despite several lacunas, the project is nearly 80 percent complete.

Meanwhile, WAPDA took a surprising turn and refused to provide drinking water under the excuse of not having any approval from the Council of Common Interest (CCI). Conversely, the government of AJK stood by its ground and reiterated its stance that no further approval is required as its right over 126 cusecs drinking water from the Mangla reservoir is undisputed and WAPDA should release the agreed water allocation from Jari tunnel. Since then no further tangible development has taken place.

As a matter of fact it was decided in the beginning that the drinking water would be provided through an executive order while irrigation water proposal would be presented before CCI for approval. Lamentably, WAPDA clubbed both issues and presented them before CCI. Balochistan, Khyber Pakhtunkhwa and Sindh blocked this move on the pretext of IRSA Accord 1990 wherein the AJK is neither a party nor has any representation in the aforementioned forums. It made the matter worse and the trust deficit between Muzaffarabad and Islamabad got widened.

Prime Minister Raja Farooq Haider said that the provinces overlooked the fact that being an upper riparian, the AJK government has the first right to use water. Therefore, AJK does not require the permission and consent of Sindh or Balochistan as it is not a part of IRSA. Keep in mind that AJK, like Gilgit-Baltistan, is an affiliated unit of the federation of Pakistan, not a province.

"Prime Minister Imran Khan should intervene to resolve this issue as the federal government is not only a signatory to the tripartite agreement of 2003 but also a guarantor," Farooq Haider suggested.

Not only Mirpur’s drinking water problem, but other issues related to hydropower projects such as Neelum-Jhelum and Kohala merit an urgent intervention by the prime minister of Pakistan to fulfil people’s demands and to reverse the growing public disillusionment.