With the planet’s single largest media audience captive, news rooms became war rooms, news anchors became generals. How could it be any other way? 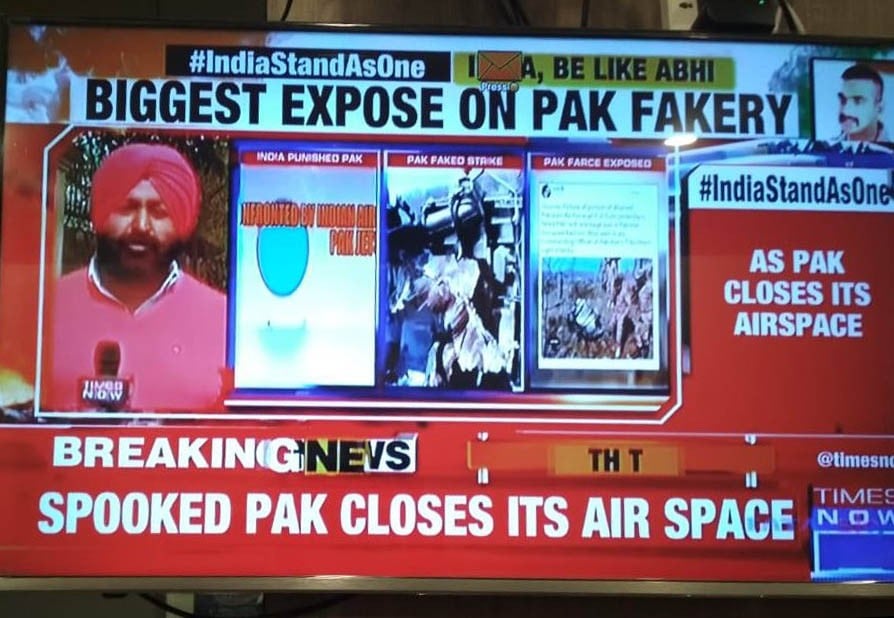 The media started beating the drums of war from the moment a suicide bomber incongruously chose the Valentine’s Day to blow up himself into a military convoy, killing over 40 soldiers in Pulwama. The initial outpouring of grief and anger in India was logical -- after all this was the worst peacetime single act of war in the Indian territory since independence.

Within a fortnight, Indian fighter planes had crossed into Pakistani territory and conducted a bombing raid -- the first time since their last full war in 1971. Within 24 hours, Pakistan had retaliated, shot down at least one fighter plane and captured at least one pilot. These are the bare bones facts -- officially acknowledged by both sides -- the rest is not clear. Why? We’ll have to look at the media of both sides to understand this.

The hysteria and jingoism were not new, the intensity was. The last time Indian and Pakistani soldiers fought a direct duel -- in 1999 in Kargil -- India had only three private TV channels, Pakistan none. And there was no internet to speak of and no social media anywhere in the region. This time India has over 400 current affairs TV channels alone and Pakistan 40 while around 350 million social media users in India and more than 35 million in Pakistan.

No wonder, the war of words between India and Pakistan was more intense than the aerial dogfights in the Kashmiri skies. If each vicious soundbite on TV screens, social media space and newspaper inches were a bullet, millions would be dead in the last two weeks alone. It is not hard to see why. For the media, the Pulwama-to-Balakot events ticked all the right boxes for optimal audiences: India/Pakistan rivalry, militants, militaries, terrorists, Kashmir, elections and Hindu/Muslim binary. With the planet’s single largest media audience captive, news rooms became war rooms, news anchors became generals. How could it be any other way?

And yet that is exactly what makes the prospects of war in the region more real than probably anywhere on the planet. Media is supposedly the guardian of public interest but when upstream political and security establishments in India and Pakistan have the amounts of resources for manipulation of public opinion that they do, the media is bound to become a player that extracts a downstream cut of the proceeds in the process.

Media in the region earns more from conflict than from peace because the peace lobbies in the two nuclear armed countries are too small to have any chance at impacting a critical mass of public opinion. There are around 150 daily TV talk shows in Pakistan reaching over 100 million people and more than 800 daily talk shows in India that are consumed by over 800 million -- most focus on politics and conflict and populated by politicians in a pluralist milieu that almost ensures peace has little chance of becoming a certainty. The critical demand for peace and development even within the two countries is simply not big enough to lead to even simple majorities in both countries escape the poverty line.

The unending misery of Kashmir -- irrespective of who is behind it -- and the rising tide of rightwing political forces in both countries ensure that media jumps at a chance to play up the threat of the Other (Pakistan/India) to ensure media audiences and consumers.

Indian TV media are a breed apart -- their sheer competition for audiences has forced their primetime news bulletins and talk shows (masquerading as analysis but are actually opinions) into a format that would simply be banned in many parts of the world -- vitriol, xenophobia and sensation backed by disturbing sounds and images for maximum effect even in news items.

Because Pakistani TV sector came into its own about a decade after Indian privatisation of the airwaves, they modelled their bulletins and talk shows after Indian channels. The talk shows on channels in Pakistan, in some ways, adopted their own distorted templates -- populating in recent years a phalanx of retired military officials as political commentators that freely caricaturise politics and politicians, always managing to sneak into their opinions one angle or the other leading to India and promoting the impression that any initiatives for peace with India by the civilian leadership is treasonous.

Pakistan’s free speech guarantee in the shape of Article 19 of the Constitution bans criticism of the military, judiciary, Islam (but not other religions) and even friendly countries. Being the enemy country, targeting India -- especially driven by religious nationalism that forms the cornerstone of military doctrine -- almost makes it mandatory on Pakistani media to criticise a ‘Hindu India.’ In India, of course, free speech is not encumbered by its constitution but is easily swapped for freewheeling hate speech about Pakistan almost as a default position.

The tens of thousands of media practitioners in India and Pakistan are, of course, partly influenced by the turn of events (and in other parts turning events themselves!). A discernible change of tone came over the general media soundbite in India in the 24 hours that their planes struck Pakistan and then at least one was shot down and a pilot captured. The shrillness was replaced by an eerie muteness. Pakistani media went from belligerent (in response to Indian threats) to stunned (strike by India) to euphoric (plane shot down) to condescending (setting the pilot free).

One explanation for this turnaround on both sides is that the media on both sides follows the political and security establishment’ cues. When the establishments will want to ratchet up the tensions, we know where the media, and hence also the public, will go.