Of death and loneliness 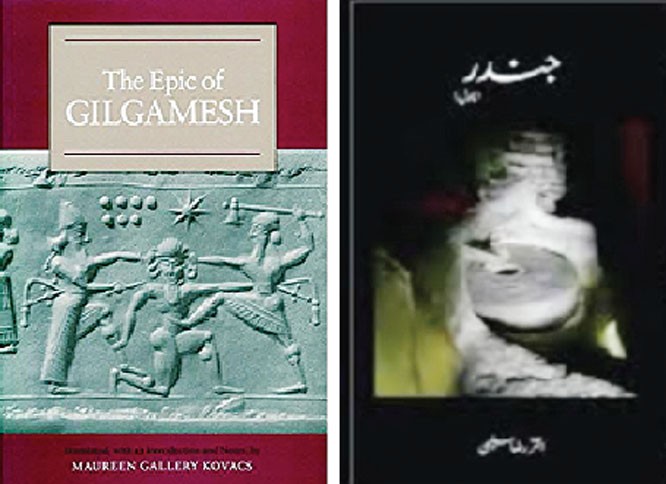 Gilgamesh, the 4,000-year-old Sumerian epic is about the king of Uruk and the heroic life that he leads with Enkidu, who originally sets out to defeat Gilgamesh but is forced to surrender and eventually join hands with him. Their alliance results in the establishment of an unprecedented power-centre in Uruk, responsible for the launch of some of the most thrilling adventures. Together Gilgamesh and Enkidu become an invincible force, trampling a cedar forest and killing Humbaba, the ferocious giant.

When Gilgamesh invites the love goddess Ishtar’s wrath by rejecting her marriage proposal, her father Anu -- the god of the firmament -- unleashes the bull of heaven upon Gilgamesh and Enkidu. They kill the bull but this enrages more of the gods, who then decide that one of the two friends must die. As a result, Enkidu falls extremely sick and succumbs to death after being bedridden for twelve days. Critics have read Enkidu’s death as a punishment for Gilgamesh.

On the thirteenth day of Enkidu’s suffering, Gilgamesh raises his voice and says to his counsellors:

"Hear me, great ones of Uruk,

I weep for Enkidu, my friend,

I weep for my brother.

You were the axe at my side,

My hand’s strength, the sword in my belt,

The shield before me,

A glorious robe, my fairest ornament;

An evil Fate has robbed me."

Mourning over Enkidu’s dead body Gilgamesh suddenly becomes aware of his own mortality. Death suddenly becomes a reality for this godlike man, who, until now, only knew how to kill. However, this realisation also reminds him of the possibility of immortality. With a strong desire to transcend mortality, Gilgamesh goes on a long and dangerous journey in search of Utnapishtim, the only man who possesses an everlasting life and could bless Gilgamesh with a life that never ends. However, despite all his efforts, Gilgamesh fails to transcend death.

Jarred Christman studies this fear of death and Gilgamesh’s killing of animals psychoanalytically and terms it as the "Gilgamesh Complex" which is the result of a "profound nexus between thanatophobia (the fear of death) and zoocide (the killing of animals)". According to him, human beings’ death anxiety results in a compensatory desire for the vitality of animal life which they try to transfer to the human domain.

Partly like Gilgamesh, Akhtar Raza Saleemi’s Urdu novel Jandar is a narrative of death and loneliness. The protagonist Wali Khan is its Gilgamesh. Wali Khan’s Jandar (mill) is to him what Enkidu is to Gilgamesh. ‘Choong’ (a local imprecise unit of weight) is Jandar’s breath. Having no more choongs to grind means death of the Jandar. With the arrival of new technology in the flour making business, the old mill loses its choongs and hence meets its death. The death of the Jandar reminds Wali Khan of his own mortality.

However, unlike Gilgamesh, Saleemi’s jandaroi (the miller) is not seen chasing immortality. Wali Khan simply waits for a choong that could return music to his Jandar which could, in turn, postpone the event of his death. This depicts the difference between Gilgamesh and Wali Khan. The former was a king: two-thirds of him god, one-third man. The latter was just a jandaroi: a frail, unheroic figure. Gilgamesh is a man of action, Wali Khan a man of contemplation. So, instead of going out into the jungles and across the oceans in search of someone like Gilgamesh’s Utnapishtim, Wali Khan keeps himself inside the room, lying just next to his dead Jandar. However, he keeps wondering who would be the first person to discover him dead. This ‘mental search’ continues for forty-five days.

Has Saleemi’s jandaroi also developed some sort of Gilgamesh complex? Is he afraid of death and wants to transcend mortality? Is he jealous of anyone’s immortality? While at the surface it seems he is just waiting for his death, a careful reading shows that he is even more in the clutches of fear of mortality than Gilgamesh. Gilgamesh, who sees his life coming to an end, tries to turn it around. Instead of being defeated by fear, he turns it into his strength in his quest to find immortality. On the other hand, the jandaroi realises that death is upon him, and simply surrenders before it. The anxiety of death turns him into a gaunt ghost-like figure.

The second part of the Gilgamesh complex can be seen in Wali Khan’s jealousy for the electric grinding machines that carry the kind of vitality that animals possess in the epic of Gilgamesh. Matching Gilgamesh’s zoocidal behaviour, he silently voices his wish for these machines to suddenly disappear from the face of the earth turning the flow of the choongs back towards his Jandar, giving it immortality, thus bringing life back to the jandaroi. In his own words: "I still believe that if (the electric mill of the village suddenly disappears, and) a choong is made available to my Jandar, it will regain its melodious sound, and my flesh that the sighs of the empty Jander have torn apart from my bones will begin resettling on them. My body will regenerate its energy. I will be alive again."

So, while this book-long monologue reflects his anxiety, it also reflects a submerged desire for immortality. The complex that Saleemi’s jandaroi has developed is similar to the Gilgamesh Complex. Both of them are reminded of their death after they bid an eternal farewell to their closest of friends. While Gilgamesh removes wildlife, Wali Khan wants the machines removed from the world.

Of death and loneliness