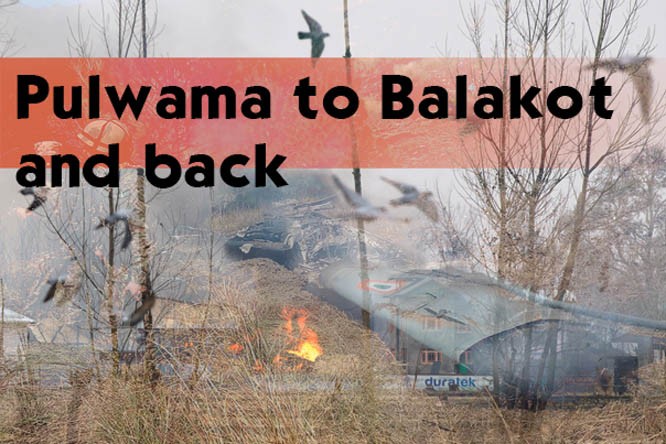 We, the citizens of India, Pakistan and Kashmir have been here before, haven’t we? The war frenzy of the last two weeks may appear unique, but haven’t we always lived on the brink -- dreaming of peace, soft borders and living like happy normal neighbours?

The attack on Indian Central Reserve Police Force in Pulwama on Feb 14 was said to be the deadliest in the valley since the insurgency began. The world’s attention was drawn to the simmering valley, albeit briefly.

Soon the blame game began and the two neighbours, India and Pakistan, came to a near war situation.

It began last week on Feb 25 when India launched what it called non-military preemptive strike on the Jaish-e-Muhammad’s alleged training camp in Balakot. This was indeed a territorial violation of Pakistan, something that India had not engaged in since 1971. Pakistan was bound to retaliate, despite the calls for dialogue, peace and restraint by its prime minister. A second aerial violation by the Indian side was thwarted by Pakistan, following which it arrested at least one Indian Air Force pilot.

It came as some relief when the Indian minister for External Affairs, Sushma Swaraj, called for no further escalation and the Pakistani prime minister while addressing the joint session of parliament offered to return the Indian pilot.

Also read: Pulwama to Balakot and back

But in moments of heightened tension, both countries lost a lot of ground they had gained over decades. India announced to scrap the Most Favoured Nation (MFN) status to Pakistan, the trade and communication links are in jeopardy and so is the almost permanent Indus Water Treaty. The worst victims have been the Kashmiris in India who had to go through some terrible incidents of violence.

While the media showed its most xenophobic and jingoistic side, on both sides, the cultural exchanges took a backseat as well.

All of this calls for some introspection and a need to sit together and negotiate peace for all. The next generations deserve to live like happy normal neighbours and not enemies forever.