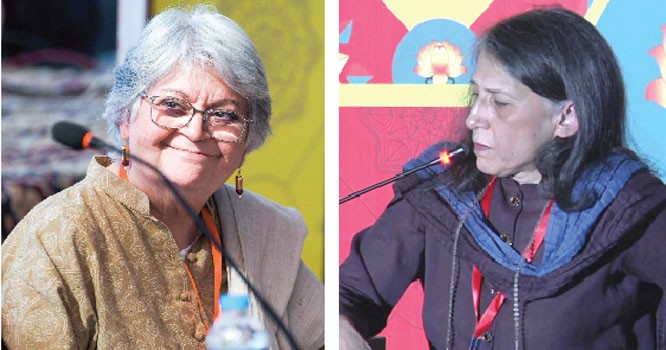 The much-awaited seventh edition of Lahore Literary Festival (LLF) began last Friday at the Alhamra Arts Centre, featuring seventy-five sessions on literature, arts, culture and music, over the span of three days. Once again, the festival brought literary traditions from different lands together. The heightened tensions between India and Pakistan, however, put a damper on the visit from Indian delegates. An obvious sense of disappointment prevailed among the audiences who had been yearning for a chance to meet Indian Director Nandita Das during the session on Manto. Did she know the people in Lahore were missing her? She had already written a heartening message that came about as a pleasant surprise. Ayesha Jalal read out Nandita’s message:

"Salam from Mumbai. I am sad that because of the current political situation I couldn’t be in Lahore. The fact that Manto’s work remains so relevant today is as much a reflection of his writings as it is of the times we are currently living in. More than 62 years after his death, inequities and mindless violence still storm the subcontinent. So much has changed yet so much remains the same. I hope that like him, we can honestly turn a particular gaze on the events and realities today. To me, making Manto was a means to an end, it was a way to respond to today’s world. Art has the power to question and challenge both our own prejudices and those who intimidate and divide us. Through the film, I have tried to spread Mantoiyat and be more honest, courageous and free-spirited. Manto believed in the redemptive power of the written word and I too believe that art and literature can be a balm in these times of struggle. Saadat Hasan died at 42 but Manto lives on."

A thunderous round of applause from an emotional audience followed the message.  The session titled Manto and the Recovery of Imagination, was spectacular as it took people back to Manto’s era through a candid discussion between Ayesha Jalal, Salima Hashmi, Khaled Ahmed, and the moderator Osama Siddique. It took people to the shores of Manto’s Bombay and brought them back to Lahore in the aftermath of partition, where they saw an anguished Manto, wandering in the streets in search of stories.  The session examined why Manto antagonises everyone in the current era, be it colonialists, bureaucrats, post-partition bureaucrats, liberals, conservatives.

"I have great admiration for Manto because he is in conflict with everybody with whom I’d love to be in conflict. Therefore, he carries my anger," said Salima Hashmi

Manto did not have any particular politics, said Jalal. She went on to say that what irritated people about Manto was that he wrote about things one is not "supposed to write or talk about". He was a social critic and a walking witness to history. She said she doesn’t expect everyone to like Manto, as "only those love him who have a tendency to think out of the box".

Manto was censored during his lifetime and 70 odd years later, he’s apparently still facing it.

Commenting on this Khaled Ahmed said that the Indian film on Manto goes deeper into his personal crisis very carefully, while the Pakistani version simply focused on the suffering he faced because of his alcoholism.

The daughters of Manto: Nighat, Nuzhat and Nusrat, who were sitting among the audiences in a fully-packed Hall 1, eagerly clapped at Ahmed’s statement.

Manto did not have any particular politics. What irritated people about him was that he wrote about things one is not "supposed to write or talk about". He was a social critic and a walking witness to history.

"Personally, I think that the Muslim society in those days was going through a change – there was a school of writers who wanted to take them towards the left but he stood apart as he focused on describing what was wrong with the society", he added. Ahmed also said that both Manto and Ismat Chugtai got into trouble over their ‘bold’ writings.

Jalal commented on the Pakistani film Manto saying that it’s important for the audiences to realise that the Pakistani version was based on a fictional play, though it has been portrayed as a biopic. "All the publicity that I saw of the film portrayed it as a biopic which it is not – because it is a fictionalised account of Manto’s life." She said that Nandita Das’s film is closer to history as well as to Manto’s life - "so I think you have to accept the Pakistani film as a piece of fiction", she added.

Adding to the discussion, Hashmi pointed out that Das is better versed with historical facts. "So in that sense, it is a writer’s film and she makes no qualms about it. It talks about how Manto fought in that particular time when there were larger than life events." She expressed her disappointment over the film ban saying, "This ban to me is due to a total lack of imagination."

Discoursing about Manto’s universal relevance, Ahmed said that Khalid Hasan’s translations of Manto have introduced readers to the legendary writer all around the world.

Jalal added to the conversation by talking about Manto’s inspirations as a writer. According to her, Manto was an avid reader who would pore over Russian and French literature. Being fond of Guy de Maupassant’s writings, he learnt the art of short story writing from him and various other Russian authors.

"Manto was very much engaged with the international literary community and the particular themes of the times. He had the mindset which did not accept truth as truth. He was contemporaneous."

Narrating Manto’s famous dialogue from Toba Tek Singh, "Upar di gur gur di annexe di bedhiyana di moong di daal of di Pakistan and Hindustan of di durr phitey munh", Jalal asserted that she always wanted to write a book about Manto. "Though I was born after Manto had passed away, I grew up with Manto’s stories that I had read even before I learned religious scriptures." She explained that there was a curious relationship between Manto and partition, adding that his well-known short stories on partition are now taught in Western academies also. "However, even if the partition had not happened, Manto would still have been a writer of consequence. The stories he wrote before partition are profound, however, his partition stories received a lot more mileage," she said passionately.

Salima narrated a moving anecdote, sharing how she met Manto when she was nine. "Every Sunday, we would walk from our house to Lawrence Garden in the afternoon and have a plate of chips now called french fries. One day we were sitting there when suddenly this man appeared, from behind the bushes. I remember this distinctly because he was gazing strongly through his glasses. He asked my mother, "Alys, how is my friend". My mother said, "Faiz is alright." He then said, "When you see my friend again, tell him I asked about him and that I love him".

Towards the end of the session, the conversation took a political turn discussing the problem of lawlessness in Pakistan. The moderator narrated Justice Munir’s account on the obscenity trial to which Ahmed responded: "There was a time when people were offended by obscenity, now it is much worse than that, these days we are offended by blasphemy. There has been a shift from obscenity to blasphemy and we know that the state is weak in confronting people who bring such accusations to the court.

"If Manto existed today, he would have reminded us of whatever is wrong with our behaviour. He would have been quite upset about the current state of religious minorities in Pakistan."