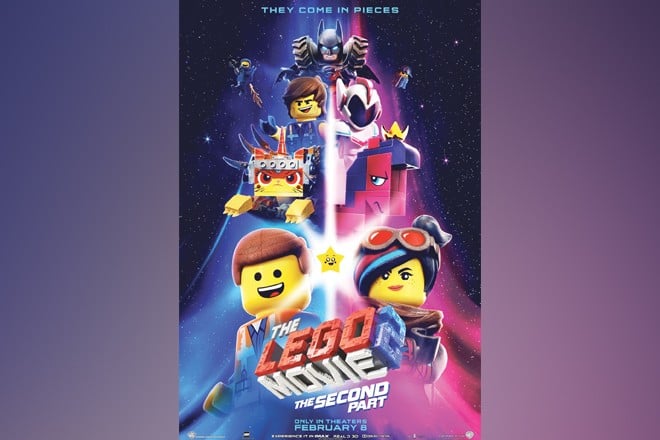 Tagline: They come in pieces.

With the bar set very high by its’ delightfully zany, wildly creative predecessor, The Lego Movie 2: The Second Part attempts to recapture the 2014 adventure’s joyful silliness and witty magic but struggles to match the inventiveness that made the original so enjoyable.

The movie continues the tale of our animated heroes Emmet (voiced by Chris Pratt), Lucy (Elizabeth Banks), Batman (Will Arnett) and their many friends. But as we return to their world, we quickly realize that everything is no longer awesome in the Lego universe. Bricksburg has become Apocalypseburg, no thanks to infantile intruders that have wreaked havoc - a reflection of the toys’ real world owners, Finn (portrayed by Jadon Sand) and his younger sister Bianca (Brooklynn Prince), failing to get along while playing with the Lego set, with the latter adding her own set of Duplo bricks to the game.

When Lucy, Benny (Charlie Day), MetalBeard (Nick Offerman), Unikitty (Alison Brie), and Batman are kidnapped by the invading forces of the shapeshifting Queen Watevra Wa’Nabi (Tiffany Haddish) of the Systar System who intends to marry the Caped Crusader, the sunny-dispositioned Emmet is forced to harden his attitude as he undertakes the quest to rescue his friends.

But things don’t unfold with quite the same level of excitement and amusement that wowed us the first time around. There is still a constant barrage of self-referential wit and pop culture riffing, but The Second Part leaves you feeling like writers Phil Lord and Christopher Miller - the masterminds behind the first instalment - are now bombarding us with frantic action and wit in order to try and distract us from the fact that they don’t really have a solid plot or an essential story to tell.

With a rambling storyline, the movie struggles to find its footing. Even its salient thematic elements - toys scared of being relegated to storage; the message of getting along - feel like they’ve already been delivered by better animated films.

That said, there is still quite a bit of fun to be had in the Legoverse, and the meta humour, colourful animation, and lively performances by the voice cast make sure that things remain pleasant from start to finish. Plus, there is a lot more music in The Second Part. It may not match the splendour of the first film’s irresistible earworm ‘Everything Is Awesome’ (revisited here in the form of ‘Everything’s Not Awesome’), but much of it is still self-aware catchy pop variety; there is even a ditty that’s practically designed to "get stuck inside your head", which it probably will for younger viewers.

All in all, The Lego Movie 2 tries too hard to capture its predecessor’s awesomeness but often lands merely as passable. Still, while it may not be as charming as the original, it does offer enough fun to ensure that its audience remains fairly entertained.

Tagline: All art is dangerous.

After the success of their 2014 film Nightcrawler, director Dan Gilroy and actor Jake Gyllenhaal team up once again for Velvet Buzzsaw, a satire of the contemporary art world that incongruously doubles as a slasher thriller.

Gyllenhaal plays influential art critic Morf Vandewalt who becomes embroiled in a shady project after his friend Josephina (Zawe Ashton) - who works for powerful gallery owner Rhodora Haze (Rene Russo, also a Nightcrawler alum) - steals the paintings made by a dead man, Vetril Dease, who wished for his art to be destroyed.

As everyone starts profiteering off Dease’s work, a supernatural element creeps into the tale. The artworks start exacting revenge against those who are exploiting the paintings.

Velvet Buzzsaw takes an interesting concept but pairs it with an underwhelming treatment. There are moments when it hits the mark - Morf’s self-important pretentiousness; the aftermath of a death being inadvertently viewed as an art installation; the awesomely ridiculous character names - plus the cast is stellar. Along with Gyllenhaal - who easily steals the show as a pompous art snob - and Russo, the roster also includes the terrific Toni Collette (in a memorable blonde bob wig) as an art curator and John Malkovich as an artist past his prime.

There is so much potential here for an amusing, intriguing romp. But all too often, the movie ends up struggling with its pacing and tone. Its takedown of the art world feels shallow, and while there are some inventive demises in the film, there isn’t much suspense here, mostly because it is fairly obvious which direction things are going in. Also, the film’s trailer pretty much summarizes the entire movie, reveals nearly all the important scenes - including deaths - and completely spoils the film, so it might be wise to not see the trailer before watching Velvet Buzzsaw itself.

Alternately, if you don’t think you want to see the movie at all, then just watch the three minute trailer and save nearly two hours of your life; you won’t be missing much.

The satire is too tepid and the horror far from scary. Things might have fared better had Gilroy chosen to either push both the satire and horror further, or focused on just one of the two aspects by either offering a sharp, scathing parody of the hollow, greedy art world or fully embracing the campy slasher concept.

Velvet Buzzsaw’s dry wit provides a handful of amusing one-liners and its cast delivers some impressive performances, but overall the film leaves you with the impression that it could have been so much more thrilling and/or incisive.