The bittersweet smell of money 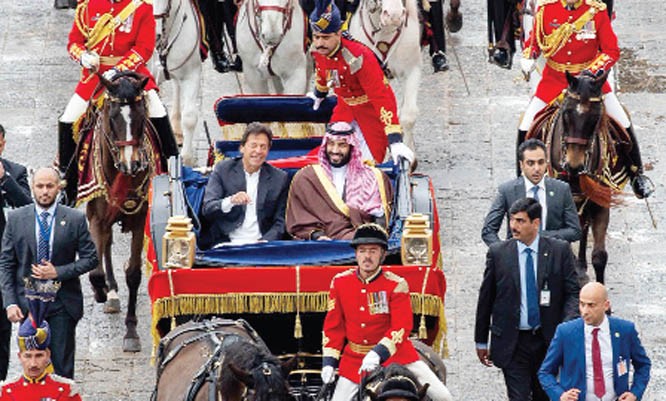 Saudi Crown Prince Mohammad Bin Salman (MBS) has come and gone. He arrived amid great fanfare and departed on a high note, leaving behind a government grateful for a seemingly significant package of promised investments worth billions of dollars. For the Imran Khan (IK) government, gasping for funds to merely stay afloat economically, this is akin to a political lifeline.

But what does the visit really amount to in both political and economic terms? The promise of $21 billion is nothing to trifle about. But seen in a broader historic context, the promises come in the shape of memoranda of understanding (MoU), not actual investments. A report in this newspaper last week revealed that Pakistan had signed over 10,000 MoUs in the last two decades but only two percent materialised into on-the-ground investments.

The political context matters. The latest Saudi promises translating into MoUs have been underwritten by MBS himself on his first-ever visit to Pakistan, and come on the heels of hectic deliberations over the last four months, including two meetings between him and IK in Riyadh and another three with Pakistan’s military leadership. They also follow two separate sets of $3 billion assistance for balance of payment support and oil on deferred payments, which led to similar arrangements with the UAE and China, thus preventing potential bankruptcy.

This total of $12 billion worth of investments in oil and mineral sector are already materialising and go beyond MoUs, so that is something.

The other significant aspect is that the MoUs are for investments that specify several projects and acquisitions - such as a major refinery in Balochistan and power plants in Punjab -- in a staggered manner over the course of five years. That the promised money has a high probability of materialising into Pakistan’s fraught economy is hinted at by the establishment of an Implementation Coordination Council to be co-chaired annually by MBS and IK, with its maiden meeting held in Islamabad and co-chaired by the two leaders even before the ink on the MoUs had dried. A three-year priority list and action plan were promptly drawn up, bilateral working groups created, and tasks assigned. This is super-fast by Pakistan standards and smell of real money!

While the fate of the investments is in the hands of the working groups, what cannot escape scrutiny is the fact that these promises-leading-to-investments really constitute an economic bailout for Pakistan, which require payback. Pakistan must start paying back $12 billion to Saudi Arabia, UAE and China starting from the new fiscal year in equal annual installments. This is on top of the current annual $9 billion debt servicing obligations. The $21 billion Saudi investments will come at an average of $5 billion a year, if all of it will flow in, and that too will depend on Pakistan creating and utilising capacity for delivery.

In addition to Pakistan having to deliver on these tough financial terms and economic performance, the real cost of this Saudi bailout over several years may be political and tougher to deliver. The deep involvement of the Pakistani military in bringing fractured bilateral ties between Islamabad and Riyadh cannot come without expectations on the issue of security.

The Saudi refinery at Gwadar will kill any remaining chances of a long-gestating Iran-Pakistan-India gas pipeline as it allows the Saudis to export oil supplies to China and Central Asia right through Iran’s backyard.

A former Pakistan Army chief is already head of the security alliance against terrorism based in Saudi Arabia. He shuttled between Islamabad and Riyadh, meeting both IK and the COAS, ahead of the MBS visit. The previous government led by Nawaz Sharif, otherwise considered historically close to the Saudis, balked at providing outright support of the military to the Saudi security alliance which is seen as one that aligns Sunni states. It was IK who protested on the streets against Pakistan aligning itself with the military alliance currently fighting Iran-backed rebels in Yemen. Ironically, IK seems to have reversed his stance on the issue now that he is in power and is ready to go the extra mile with Saudi Arabia.

While there has been no formal mention of Pakistan’s security partnership during the MBS visit, everyone found themselves focusing on it when the Saudi foreign minister, accompanying MBS, said in a press conference jointly with his Pakistani counterpart that Iran was a sponsor of terrorism. This brought into open the elephant in the room - Pakistan’s ties with Iran - even though the engagement was a bilateral one between Pakistan and Saudi Arabia. This embarrassed Pakistan and its foreign minister had to call his Iranian counterpart within a couple of hours of his press conference with the Saudi foreign minister to assuage concerns that Pakistan was neutral with Iran and that its ties with Saudi Arabia were not going to influence its relationship with Iran.

This ‘X’ factor in Pakistan’s strengthening ties with Saudi Arabia - Iran - will test Pakistan’s diplomatic and political skills at packaging a neutrality-in-policy that is not neutrality-in-practice. The Saudi refinery at Gwadar will kill any remaining chances of a long-gestating Iran-Pakistan-India gas pipeline as it allows the Saudis to export oil supplies to China and Central Asia right through Iran’s geographic backyard. Iran will not let go this strategic slight by Pakistan. This will make a long-term de facto or de jure security pact between Pakistan and Saudi Arabia all but inevitable to counter Iranian anger.

The MBS visit to Pakistan definitely carves out a more strategic engagement with Pakistan by moving the course from hitherto an assistance relationship to an economic relationship. But that is really a thin cover for a broader, long-term security relationship that will pitch Pakistan into a larger strategic regional game but, considering how security interests in Pakistan impact national polity, will end up changing Pakistan’s political landscape. And, from the perspective of the people, this will not necessarily be for the better.

The bittersweet smell of money