Say no to jingoism 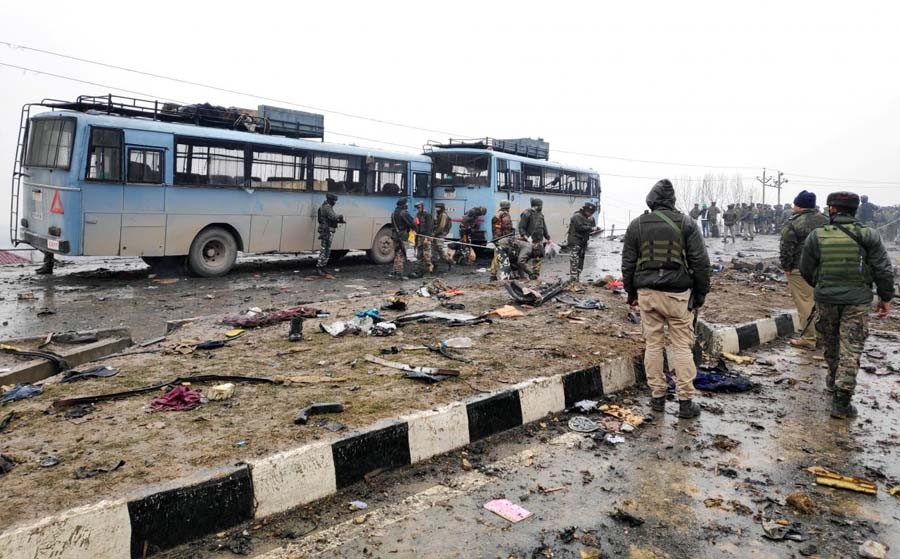 Whoever the terrorists involved with the Pulwama suicide bombing of February 14 identify with, their objective quite obviously was to aggravate confrontation between India and Pakistan. The leadership of the two closest South Asian neighbours is therefore on trial -- whether it is wise, farsighted and strong enough to deprive the perpetrators of this dastardly act of success in achieving their purpose.

The only way the terrorists can be denied success is to avoid taking actions and assuming postures that can take Pakistan and India farther away from the path of amity and collaboration for mutual good than they are at present.

Unfortunately, at this point in time, the governments of Pakistan and India are both betraying, in different ways a lack of interest in frustrating the terrorists’ mission.

Rejecting New Delhi’s charge that Islamabad is responsible for the Pulwama outrage, made before anything other than the number of casualties was known, Prime Minister Imran Khan has spoken in a tone that appears to be conciliatory. He has promised any investigation that would satisfy India, and action against any party within Pakistan’s jurisdiction whose involvement with the terrorist incident can be proved.

It so happens that in regard to the matter in hand reason could be on Pakistan’s side. The incident occurred at a time when the government of Pakistan was devoting all its energies on courting the Saudi Crown Prince. With Financial Action Task Force breathing down its neck and it being in the midst of desperate attempts to attract foreign investment, Pakistan had no reason to create more problems for itself. Besides, the Pakistan Tehreek-e-Insaf government’s main concern at present is, or should be, to establish itself as an efficient manager of national affairs, and opening a new round of hostilities with India could not appeal to a sane mind. Thus, nobody can claim that Pulwama terrorists advanced Pakistan’s interest. In fact, they did a great disservice to this country.

However, Pakistan’s prime minister must not be unmindful of how the world will look at some chinks in his armour. Pakistan spokesperson’s expression of shock at Pulwama blast did not amount to its condemnation that everyone expected. An organisation describing itself as Jaish is reported to have owned responsibility for the incident. The existence of more than one Jaish is no secret. In order to avoid the blame being laid at the door of the Jaish leader who lives in Pakistan, he himself should have disowned responsibility. That is the least the government and the people of Pakistan, who have hosted him in extraordinary comfort, expected from him.

Now that Pakistan has deemed it prudent to seek the UN’s intervention to defuse the dangerous tension in South Asian region, it should monitor the reaction of the international community to the degree of freedom and public respect the banned militant outfits apparently enjoy in Pakistan. The foreign minister’s statement that Pakistan will not allow its territory to be used for terrorist attacks anywhere else is welcome but the outside world might ask for firmer guarantees than words. The prime minister is right in advising his party leaders to be extremely careful in their statements on the subject. He must ensure that nothing is done by anyone in power in Pakistan that would further exacerbate its relations with India.

As regards New Delhi’s response to Pulwama, its over-reaction and attempts to make political capital out of the affair can only be regretted. It started blaming Jaish-e-Mohammad of Maulana Masood Azhar before making any inquiries. Even after the suicide bomber had been identified as a Kashmiri youth who had been nursing a grievance against the Indian security forces, and amid reports that the explosives had been procured locally, there was no let-up in vicious attacks on Pakistan. One can understand the grief and anger of the government and the people of India, and no true Pakistani should fail to condemn the senseless killing of Indian citizens and to condole with the bereaved families. But it will be difficult to absolve the government of India of the consequences of its vengeful actions.

No country can achieve progress and prosperity only by whipping up hatred towards a neighbour. Objectively speaking, any Indian political party that establishes peaceful relations with Pakistan and thus ensures peace in South Asia might win elections better than those who rely on trucking in hate.

New Delhi did not stop at taking action against the Pakistan state, such as termination of the Most Favoured Nation status and the imposition of a heavy duty on imports from this country, but also told Pakistani pilgrims to leave India immediately. Those on the lookout for an excuse to target Pakistani visitors and members of the Muslim community in India took these steps as a signal to indulge in orgies of violence. A Pakistani prisoner was brutally murdered in jail. Indian Muslims were harassed at various places. Now the Kashmiris have been included in the targets of violence and hate and their shawl stores have been raided. Questions have been raised about the possibility of cancelling Pakistan -India match during the World Cup tournament in June.

Once the demons of hate are released there is no end to the madness.

It is possible that BJP has decided to exploit the Pulwama incident to improve its prospects in the coming general election. Time alone will tell what impact the Pulwama affair will have on the electorate’s choices in the election. Even if it does help BJP to return to power, it would be a hollow victory because attention will have been diverted from the need to free a vast multitude of the curse of want, hunger and disease. Besides, no country can achieve progress and prosperity only by whipping up hatred towards a neighbour -- and this applies in equal measure to Pakistan as well.

Objectively speaking, any Indian political party that establishes peaceful relations with Pakistan and thus ensures peace in South Asia might win elections better than those who rely on purveying of hate.

However, this is a matter entirely in the hands of the citizens of India. One can only hope that India has a large enough number of people who will defend the democratic and secular foundations of their republic. Their success in this regard might not fail to persuade the people of Pakistan to repudiate theocratic ideas and move towards democratic and egalitarian ideals.

The civil society organisations in both India and Pakistan have often faced the challenge of protecting their people from the effects of their rulers’ waywardness and misadventures. The subcontinent’s present drift to disaster once again demands that they strive to rescue their people from the clutches of war-mongers.

Say no to jingoism