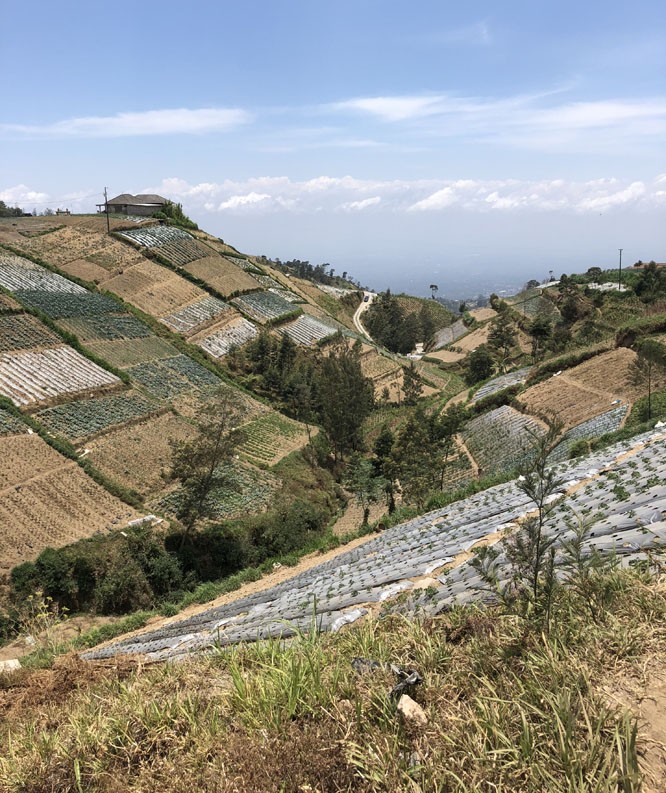 We had heard from friends that Jakarta is a destination best skipped -- a generic big city with traffic jams and air-conditioned malls where yuppies drink overpriced cappuccinos to distract from the chaos outside.

So on our first trip to Indonesia we flew instead to Yogyakarta, one of the two remaining royal cities in the country and a centre of Javanese culture and arts. Many tourists come here for a quick stop to visit nearby Borobudur, the largest Buddhist temple in the world. We had time to kill and were in the mood to lounge, so we stayed in Yogya for seven days.

Before this trip, I had travelled mostly to Western Europe and the US, experiences that always feel like stepping into an alternate reality. None of the rules I grew up learning apply there, so my mind doesn’t compulsively drift to comparisons between home and abroad, between Rawalpindi and London, between Lahore and New York. In Indonesia, I recognised the insignia of home -- the azaan from the mosque next door that woke us up every dawn, the na’at blaring from the neighbour’s radio, the large families.

Our Airbnb host, Nuri, was a small, bespectacled woman in her 60s, living in a modest one-bedroom house in a suburban outskirt of the city. She is a heritage Muslim who describes herself as a "universalist" and had married a Christian man, with whom she had two children. After her husband passed away from cancer, she sought companionship in Hans, a German photojournalist who has since adopted Yogya as his home and looks after the guesthouse with her.

Whenever we went out with Nuri, she joked with the neighbours and introduced us to the shopkeepers, telling us in private what price we should receive for a kilo of laundry or a motorcycle rental and becoming extraordinarily outraged if we were ever given the tourist rate for any service.

More than 85 percent of Indonesians consider themselves Muslim, a legacy of contact with Arab traders going back to the 13th century. During our time in Yogyakarta we saw most women, both young and old, cover their heads. Yet they did so while riding motorbikes alone, zooming by the rice paddies day and night. They rode pillion with their girlfriends to coffee shops and went to the markets with their one-year olds strapped to their chests. Roadside warungs, similar to dhabas back home, were often owned and operated by women like Etse, whose small restaurant near Nuri’s house fed us four times in one week.

As is the case around the world, men still hold most of the political power in Indonesia, but the domain of small commerce appeared firmly feminine. Perhaps naively, I was shocked at this. I had attributed the near-total absence of Pakistani women in public spaces, the feeling of "where the hell is half this country" you get in bazaars, at least partly to religion. In Indonesia, I learned how cloudy these correlations could be. The world’s most populous Muslim country had more female merchants than anywhere else I had been to.

The mother-to-be walked around the house… her face radiant and bump pronounced in a baby blue gown. I thought of my hometown in rural Punjab, where a body like hers would be deeply regulated.

One day, Nuri took us to a village Mitoni ceremony, which celebrates the seventh month of a woman’s pregnancy. The mother-to-be walked around the house, greeting guests from the neighbourhood, her face radiant and bump pronounced in a baby blue gown. I thought of my hometown in rural Punjab, where a body like hers would be deeply regulated, such blatant signs of reproduction hidden even though its fruits, the offspring, are loudly celebrated. I remembered going to a wedding as a child, where a pregnant aunty got up to get food only after the queues had died down. "Oh, yes, because of your condition," another aunty had laughed, looking at the woman’s belly that was swathed in an enormous kameez that promised to reveal nothing.

Later, we attended a rainmaking ritual near Selo, a mountain town three hours from Nuri’s house, sitting at the foot of an active volcano. Such rituals are central to Javanese village life and everyone was in attendance. From the women’s brightly coloured jilbabs and the mass exodus to the mosque after the ceremony, I could see that the village was almost exclusively Muslim. Yet the ceremony, hosted to summon rain for agriculture, was carried out to include Islamic, Hindu, Buddhist, and Christian prayers.

Since its independence, Indonesia has struggled to maintain unity across religious and ethnic lines, a towering task for a nation of 17,000 islands. The eastern island of Maluku saw severe violence at the turn of the century and the Ahmadiyah community in Indonesia has been increasingly under attack. In recent years, western media outlets and opinion-makers in Jakarta have much bemoaned the rise of Islamic fundamentalism in the country. While religion-based tensions are very much part of the modern Indonesian patchwork, the village ceremony appeared to me as an affirmation of Indonesia’s long-standing syncretic tradition, the shadows of which are only sometimes visible in Pakistan.

As a group of disparate islands cobbled together into a nation-state, Indonesia has had to learn the difference between religion and culture, how the former should complement but not undermine the latter. As a country created in the name of a single religion, Pakistan has never had to learn this lesson.

Also read: In the land of Angkor kings

At the end of our time in Yogyakarta, we said goodbye to Nuri with a heavy heart. In the days after leaving Indonesia, I found myself missing her the way one misses family. Despite a vast linguistic barrier, we had managed to spend a week together, sightseeing in Yogya’s dry heat and cracking poorly translated jokes over drawn-out dinners.

I hope to go back one day, to visit her again and see more of what that astonishing country has to offer -- from the fiercely Islamic matrilineal societies of Sumatra to the animistic tribes of Papua. Perhaps I’ll even go to Jakarta.