Forgotten Thal and its ancient roots

In his latest book, Ghauri reminds us of our collective negligence regarding the state of archaeology 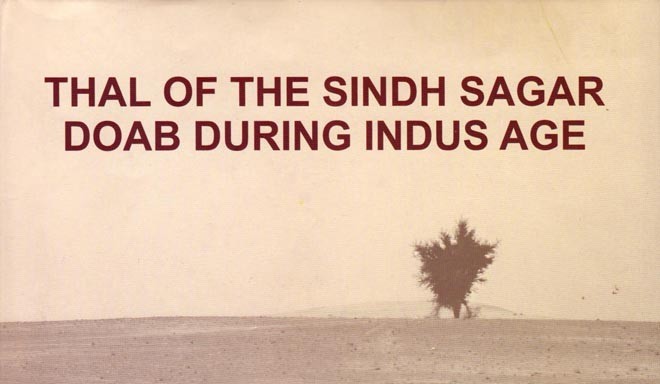 Reading history through archaeology is an interesting discipline and when you try to decode mysteries resided in stones, it may open doors to new worlds. Unfortunately, in spite of rich archaeological remains throughout Pakistan, the performance of concerned departments is not up to the mark in this regard, the result of which is that these sites remain unexplored. The book Thal of the Sindh Sagar Doab during Indus age once again reminds us of our collective negligence regarding the state of archaeology.

Zubair Shafi Ghauri, through his non-political research works, is among the rare civil servants of modern times who are doing great service not only to historians but also to the society as a whole. Works of Pakistani archaeologists, including Ghauri, are beneficial to Pakistan in many ways but our policymakers have little interest in them partly due to religio-political mantra designed under the ideology of Pakistan and partly due to ignorance.

Ghauri’s previous book Ravi Kinaray Ki Harrapa-e-Bastian, which is about Harappa and pre-Harappan settlements along with an abandoned course of river Ravi, can be considered a rare work in Pakistan, not only for archaeologists but also for young researchers and historians largely.

Henry Thoby Prinsep’s famous book History of the Punjab-- published in 1846, London (two volumes) -- recorded the beginning of the archaeological discoveries of Gandhara at Mankiala, now a village (Kallar Syedan road),by the French generals of Ranjit Singh, Ventura and Court, in the 1820s.

On the orders of the maharaja, they searched the land and found countless coins, precious stones, earrings, boxes of decomposed animal substance etc on approximately 15 hilltops. And before the book was published many such things had been deposited at the Royal library of Paris, with the maharaja’s permission.

In the recently held Afkar-e-Taza Festival (ThinkFest), French scholar J M Lafont mentioned a huge collection of coins placed in the Royal British Museum under the title ‘Cunningham Collection’. Alexander Cunningham was a British military officer who participated in wars for the annexation of Punjab (1849). He also founded and organised what later became known as the Archeological Survey of India.

Punjab, the land of five rivers, has had historical significance from ancient times. Greeks called it Penta-potamia while in Mahabharat and Ramayan it was called Punjnad (spelt by English writers as Punjanada). One of the oldest names of Indus River was Punjab and the famous dictionary of Hobson-Jobson recorded it with numerous references.

Among its five doabs, the biggest yet thinly populated one was the Sindh Sagar Doab, the area between rivers Jehlum and Sindh. Main areas in this doab include the Kala Chitta Range, Margala and Murti hills, Potohar, Salt Range and Thal. Some of the major cities in this doab are Attock, Mianwali, Pindi, Islamabad, Chakwal, Khushab, Layyah, Bhakkar, Muzaffargarh and Kot Addu.

Ghauri spent three years in the Sindh Sagar Doab starting from 2009 and during that time, penned a new book. His latest work is about the Thal Desert and contains analyses of around 226 prehistoric settlements of the Gandhara -- early and late Harappan period in the Punjab. The author also mentioned that his next book would be about the remaining 300 settlements that he discovered. In preface of the book, Dr Saif ur Rahman Dar writes that the author "is more mature than most of the present-day senior professional archaeologists".

Dar seems to agree with the author that River Indus once used to flow in the middle of the tract now called Thal. "Some of the present day tracts of Thal called pattis (lakes) are almost certainly the ancient routes of the old bed of the Indus". Those lands were used for cultivation in ancient times. The author also mentioned that unlike the Cholistan desert, Thal is heavily cultivated at times of the year.

Discovery of Harappan settlements in Thal is important to understand the common bonds between Sindh and Punjab from ancient times. Due to Zia’s Islamisation and provincial nationalisms we often ignore it in our narratives. But can we ignore archaeology? Can we overlook Mohenjo-daro, Kot Diji, Gandhara, Harappan and pre-Harappan settlements?

Ghauri knows it well that his work is just the beginning rather the opening of a new arena for young researchers. He writes that his work will "persuade research scholars to conduct detail surveys and reshape ideas associated with settlement patterns of the Indus age".

In the end, he mentions that the opening of Thal Canal will cause the prehistoric past of Thal desert to vanish forever, hence timely measures should be taken in this regard.

In the recent past, many of us have come across the word Waseb, used to describe the Seraiki/Lahndi speaking areas. Thal is among them but very few people know about its ancient roots and its linkages with Harappan civilisation and Punjanad. With this book, they may be able to discover their forgotten history entrenched and embedded in the punj daryaee dharti since long.

Forgotten Thal and its ancient roots