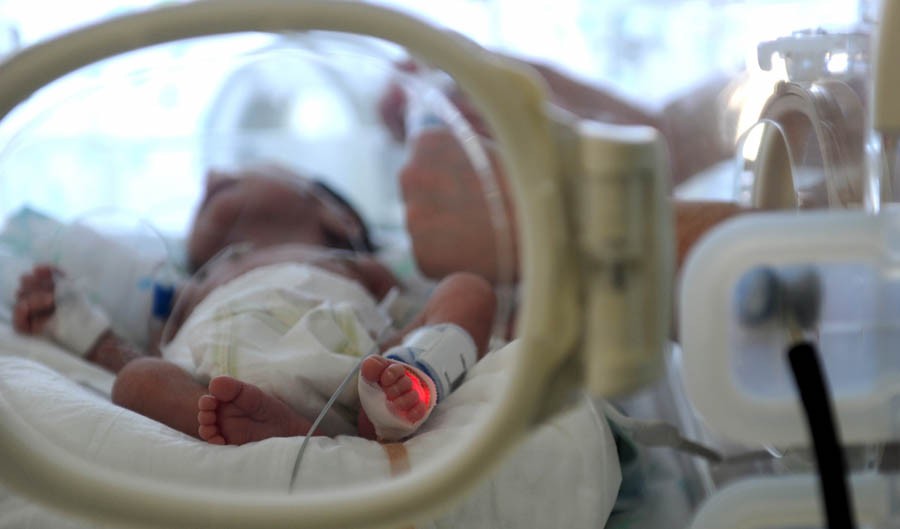 Hamza Shahbaz Sharif, leader of the opposition in the Punjab Assembly, is in London where his newborn daughter is having medical problems. Initial reports suggested that the baby might need urgent heart surgery but further updates are not available. I hope and pray that the baby recovers completely.

Even though for most of my professional life I have operated on adults with heart problems, my training required knowledge and some experience of operating on children with heart problems that children might be born with (congenital heart disease-CHD). And yes, I had to retake these examinations every ten years.

CHD is a vast subject of many different types and combinations of abnormalities that children can be born with. Before I attempt to discuss a few of the more common types of CHD, I first want to say something about the heart and its main blood vessels in an unborn child.

Until birth, a child gets oxygenated blood from the mother through the placenta. The baby’s lungs do not work and so the blood bypasses the lungs after it goes through the heart. This bypass requires connections between different parts of the heart and the arteries and veins around it that close off after the baby is born and starts to breathe.

The major ‘bypass’ connections between the baby’s heart and the placenta wither away but some might stay open and these are the first type of CHD. Of these the one open connection is between the upper two chambers of the heart or the ‘atria’ and is called the atrial septal defect (ASD). This rarely causes any serious problems immediately after birth.

The other open connection is the ‘patent ductus arteriosis’ (PDA) that connects the artery leading from the heart to the lungs (pulmonary artery) with the major artery leading from the heart to the rest of the body (aorta). This, if open after birth, can lead to problems for the baby but the PDA can often be closed using medicines or catheter approaches. Surgery is rarely needed to close a PDA these days.

Besides these ‘defects’, there are many other types of CHD that can be broadly divided into two categories. The ‘blue baby’ (cyanotic) diseases and the ones without cyanosis. Blue baby diseases are all those where either the blood is not going through the lungs before reaching the rest of the body or else the blood in the two sides of the heart does not crossover as it normally should as happens in what is called the transposition of the great arteries (TGA).

The most famous blue baby disease is Tetralogy of Fallot (TOF) often just called ‘tet’. It is also one of the more common problems where many children do grow older but remain sick and keep getting sicker. Heart surgery before the use of heart lung machines in the nineteen fifties when ‘correcting’ the actual defects became possible was about somehow treating these sick children.

Ingenious methods were devised that redirected blood outside the heart to make these conditions better (palliate). Of these palliative operations the most famous is the one now called the Blalock-Thomas-Taussig shunt that originally was just referred to as the Blalock-Taussig (BT shunt) until the important role played by the African American assistant Thomas was recognised.

Most of the blue baby problems can now be corrected with appropriate surgery. And surgery in babies has become much safer so palliative procedures are used much less frequently and only in the very sick children to give them time to get bigger and stronger. Complete repair of TOF is now often done in babies as young as a year as long as they are healthy otherwise and have normal size and weight.

Of the types of CHD that do not produce cyanosis, the commonest are connections between the two sides of the heart. When the two upper chambers are connected that is called an Atrial Septal Defect (ASD). When the connection is between the two lower chambers it is called a ventricular septal defect (VSD). In those with relatively smaller defects, repair can be performed during childhood rather than infancy.

For most types of abnormalities, great progress has been made to develop methods to bring about complete or almost complete corrective operations. And in certain cases the only cure might be a heart transplant. The major problem of transplants at a small age is the availability of a donor heart small enough to match the body size of the recipient.

In the United States and other western countries where corrective surgery has now been performed for many decades, a new area of specialisation in heart medicine is becoming established. That is the treatment of patients that have had surgery as children and as adult develop unusual problems not seen in normal people.

The problem with many of these ‘post-repair’ adults is that they might have moved around with their parents from place to place and over the decades, old records are lost and the patient might not even know what operation they had as a child. Fortunately, modern heart scanning techniques have become good enough to determine what had been done in the past.

Coming to the Pakistani context, people in the general public and even many non-cardiac physicians want to know why every heart surgeon cannot operate on babies. As my professor of paediatrics would say all those years ago, babies are not just small adults.

And in Lahore we have one children’s hospital where there actually exist the facilities and the expertise to take care of these sick babies and perform these operations. I am not aware if similar facilities exist elsewhere in the Punjab. The facilities available to take care of babies with heart problems are just not enough for the population of the province. Sadly such facilities are expensive to build and staff and the trained physicians to work there are hard to come by.

Frankly expertise in operating on CHD is much more difficult to achieve than operating on adult patients with heart disease. It is not just that it is easier to operate on a larger patient than somebody where the entire chest of a patient is smaller than a surgeon’s hand. And more importantly the different types of CHD and variations require considerable experience to master the treatment of most of them.

In the US before a trained heart surgeon can operate on children, he or she might have to spend a couple more years in training. And even for a country like the US where medical facilities are so advanced, centres for treatment of children with CHD are still relatively limited.

Coming back to the Sharif baby, there have been no reports of urgent surgery so I hope the baby is strong enough to wait for an appropriate time and undergo ‘elective’ rather than emergency surgery. Or better still the baby does not require surgery at all.