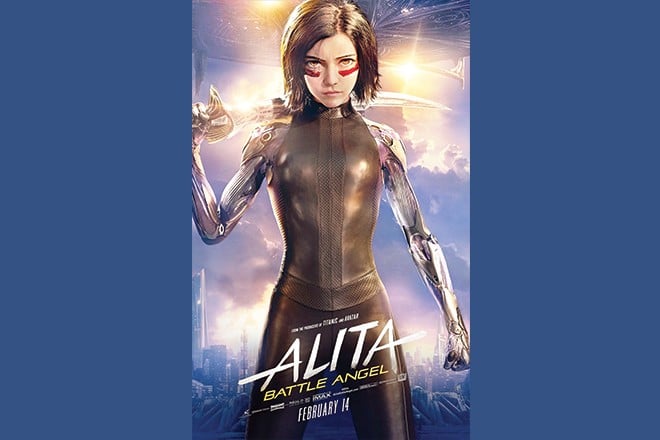 It’s the year 2563, the dystopian present has plagued the people and the earth is crumbling via the divides between the haves and have-nots. In such a situation, cybernetics expert, Dr. Dyson Ido (Christoph Waltz) discovers a 300-year-old trash-heap treasure: the ‘core’ of a highly advanced, full-body cyborg with a surviving teenage-girl brain. He rebuilds her and names her after his dead daughter, Alita.

Exploring how the 300 year old highly-advanced cyborg Alita (Rosa Salazar) discovers who she is, the narrative is largely about her surviving in the new world as she comes to realization of her own warrior instincts, as well as of the shady characters out to scrap her.

Meandering through various turns, the James Cameron (written and produced) film is an anomaly to release in 2019, especially when Alita - Battle Angel plays out to the whims of the sci-fi lovers of decades gone by.

Festooned with bits and pieces from popular films - the multilingual Iron City from Elysium, the protagonist’s struggle right out of Ghost in the Shell, and the plot-driving future-sport ‘Motorball’ from Rollerball - the film is less a spectacle and more a 3D experience to enjoy for a few moments and then forget about forever.

Additionally, the fact that the film had been held on to for so long, shows. While one was expecting that the Titanic filmmaker would bring this world alive as he did with Avatar, he disappoints as it turns into a cyber-punk mashup no one asked for. Perhaps the fact that he decided to give the direction to Robert Rodriguez is the culprit there.

Nonetheless, Alita - Battle Angel does have its plus points, which have given it a cult -following in the few days since its release. For example, when Alita gets into action-mode - crunching cyborg skulls with her slender fists or slicing them into two with her earned ‘Damascus Blade’, the film doesn’t fail to deliver. It’s made with sci-fi fans in mind and it keeps playing on the tried and tested formula of making the protagonist the crusading savior in a dystopian faraway land.

In other places, the film also keeps the choreography slick and inventive. There’s even a bloody brawl scene in a bar-room, which would make anyone minutely interested in the genre to jump up in excitement with its myriad of cyborgs and their countless styles of fighting. It is propulsive storytelling with the right amount of firepower, and perhaps, that is the film’s largest and only victory.

There is one conman for every petty crime out there, and it seems Bollywood has a list of them, which never ends. We’ve seen cheating bankers, foxy gold diggers, and numerous corrupt policemen. However, what Fraud Saiyaan brings to the limelight is a chronic groom - who marries women to live off of their earnings and wealth 13 times!

Narrating the story of Bhola Prasad Tripathi (Arshad Warsi) - a con artist in North India who marries women who seem to just want a marital status, the film explores his serpentine journey as he goes from Lucknow to Varanasi, merrily marrying women along the way. However, luck runs out when he gets a call from what he calls the ‘biggest mistake he ever conned’, Mafioso Chanda (Bhavna Pani), who threatens him with dire consequences if he doesn’t mend his ways and settle down with her.

Creating a new low for Bollywood, the film is produced by Disha Prakash Jha, who seems to have inherited nothing from her parents - Prakash Jha and Deepti Naval. To say the least, Fraud Saiyaan is what Bollywood shouldn’t be doing in 2019 with its portrayal of women as mere objects of desire, who have absolutely no role in the film apart from being side characters.

Additionally, the film also reeks of mediocrity. The script is as awful as the film’s sensibilities and makes one wonder whether anything could be passed off as funny these days. It also shows that even with all the ease of modern technology, bad filmmaking will always be evident.

With zero positives to the film, Fraud Saiyaan is a narrative that could help reflect on exactly what is wrong with Bollywood today. Is it that the potboilers of comedy have been reduced to fart jokes and insipid item numbers or is it that the formula of masala films, which lead filmmakers and actors to sell their soul for an inflow of cash is too tempting to let go? We guess we’ll never have an answer to that.

If the downfall and end of Arshad Warsi - the actor who shined through the Munna Bhai series and Ishqiya – is what you want to see along with the murder of the classic Urmila Mathondkar song ‘Chamma Chamma,’ then Fraud Saiyaan is what you might want to go to your nearest theatre for.