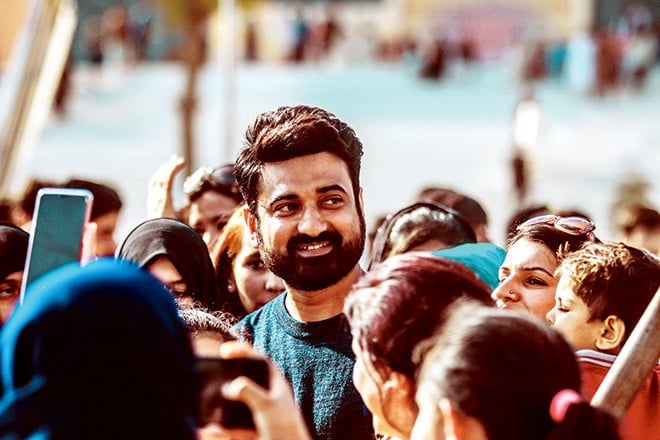 Lahooti, which translates to a wandering traveler with no destination, as Saif Samejo tells me later, has many dimensions; from Lahooti Ashram to Lahooti Live Sessions to Lahooti Melo, the latter is the subject of this article.

Lahooti Melo 4, a festival I had never attended but had always heard great things about and one that just finished its fourth run with great flair as well as room for improvement, is more than just a music festival. Lahooti Melo has always been about a combination of several things, including poetry, art, dance, music as well as important panel discussions and conversations.

Leaving for Lahooti Melo 4, as we drove on past city limits, words that came to mind were barren wastelands. As it turns out, Jamshoro is a University town, and though quiet at first, it began to shimmer as I arrived at the venue and saw the crowd. Some were lying in the gardens, some were attending sessions and some were looking forward to the contemporary acts we take for granted in cities. Some were looking forward to seeing the indigenous acts. I saw several kids trying to get backstage to get photos/selfies with Mai Dhai. Who knew kids adore her as much, if not more, than contemporary musicians? I have seen Mai Dhai at other high profile events, some where no one even recognized her. That’s the power of Lahooti.

The theme for Lahooti Melo changes every year and this time it was An Ode to a Liberated Woman, chosen to empower - in any way possible - a young woman who had been raped by a well-known director at Lahooti’s debut outing. She had written a letter about her ordeal; that letter was read out while keeping the young woman’s identity confidential.

This festival, as Saif tells me, was an ode to that young woman.

Things may not have begun on time in some cases but several important panels did take place, the kind that you hope to see at other festivals but never really do.

One such a panel, held on day one, was Be Khauf Azad Hai Jeena Mujhe: From #MeToo to #NeverAgain. Moderated by Rahma Mian, who did an absolutely wonderful job asking the right questions and giving the speakers a chance to have their say, it featured Hamna Zubair, Sanam Maher, Jami Mahmood and Zhalay Sarhadi.

Zhalay Sarhadi spoke about ‘Inkaar Karo’, an initiative launched by Angeline Malik (which Zhalay is on the panel of) to help victims of harassment in fighting back. What caught my attention was some of the conversations that happened onstage, pertaining to #MeToo in a local context.

As moderator, Rahma Mian noted, "We will be talking about "MeToo but not the description all of you have read. It’s going to be a little different. Because all of these people I have introduced have worked in some shape and way on thinking about #MeToo in Pakistan, especially in and around the entertainment and media industry."

Since the panel could not possibly cover every single inch of such an expansive topic as a whole, the moderator explained that it will focus on #MeToo and how it has affected the lives and works of the panelists.

Jami spoke about how he already had issues going on about the misrepresentation of women as objects of desire in films. He then spoke of the Ali Zafar-Meesha Shafi case and explained that he had worked with Ali Zafar for the video of ‘Chal Dil Meray’ and therefore thought he knew the man. He spoke about how people felt letdown by him (Jami) for not reacting initially but then he came out in support of Meesha and he told them more such stories will come out, just have hope.

Jami had spoken out on Facebook and he faced backlash for it.

"Sometimes I think and sometimes I don’t (about what I write on Facebook). It was thought that I was trying to ruin the film - Teefa in Trouble."

"Did you get a response from other people in the industry?"

"It just vanished," said Jami, meaning there was no support from the industry. "I know our industry inside out and now we see how important it is to support these issues in order to support the cause. Yes, there will be backlash."

The panel on mental illness, on the other hand, went haywire not only because some panelists, like Frieha Altaf, made little sense as to their understanding of mental illness but primarily because it didn’t feature a mental health professional, who’d tell you that even if you were someone seeking help, the ratio of psychiatric doctors in the country is so low that you might not get the help you need. They would have also shed a deeper light on mental illness, the severe lack of understanding and how expensive mental health care costs run. This panel was insufficient at best.

In another panel about the upcoming film, Laal Kabootar, moderator Raania Durrani spoke to the film’s producers and lead cast. One key question that she asked was about how to encourage audiences back to cinemas.

"People do take interest," said Mansha Pasha, one of the cast members. She spoke about how people now come up to her and ask about smaller films that haven’t been advertised as much. "Going and watching is a different question. It starts with taking an interest within your own art and culture scene, which exists. When it’ll be more interesting and entertaining to people, then they will go and watch it."

The sound of music

As for the music, I encountered different musicians and/or heard them at the festival. FDVM ripped it with their set and Jamshoro responded in kind. Sounds of Kolachi performed a smaller set but had the audience and made new fans that night as did Project Zil. Arieb Azhar caught one’s attention and Chand Tara Orchestra, Mughal-e-Funk, Jimmy Khan, Mekaal Hasan Band - some of the best artists in the country – played their blend of music to dancing students and many others who watched the varied music unfold.

On both days, whether the sets had to be compacted or not, the ground was filled with a lot of people, dancing and reveling in the mystery that is Lahooti Melo 4.

The backstage was a sight to see. Fakir Juman Shah and group had been waiting to go on stage for some time but as they spoke to Instep, they were happy to be there and had no problem waiting. Now that’s a real fakir we could all learn a thing or two about patience from.

I also had a chance to speak to Mai Dhai backstage. We do not speak the same language and yet this beautiful woman, who echoes the real sound of the nation, was sitting there with her son and troupe.

I asked her about how I ran into young students who were trying to get backstage to get pictures with her. She smiled that incredible smile and then she told me, as I finally understood, "It’s not about money, it is about respect."

The backstage for Lahooti Melo 4 was not a testosterone-fueled environment. Even as one spotted Asif Farruki or Wasatullah Khan, one also spotted Sharmeen Obaid Chinoy, Nazish Brohi, Naushaba Brohi, other indigenous artists, both male and female, a small and buzzing crowd from Karachi, academics and no one looked like they felt out of place.

At one emotional point, I caught Saif Samejo and Naushaba Brohi as they shed tears and she reminded him what he and his team had pulled off was miraculous.

My impression of desolate land changed the next day as the driver drove from the midtown, as I call it, back to the venue and believe it or not, I saw a Sana and Safinaz outlet, as well as the rest of the city in a snapshot. My one and only question from Saif Samejo was that at a time when everybody has jumped onto the bandwagon of either liberating women or celebrating liberated women, what inspired him to do this massive festival that caters to thousands.

Still suffering from fatigue and sitting with an accountant, Saif Samejo spoke about the event, its purpose, cause and effects.

Now that everything is said and done, with Lahooti 4 over, one misconception that needs to be clarified is that Lahooti is not only a music mela. It’s a place to talk music, art, poetry and continues to be a showcase of some of the most riveting indigenous artists as well contemporary musicians the country has produced.

"The theme was beyond empowered women and #MeToo because when we think of empowered woman, we tend to think of a financially empowered woman. We were not talking about the financially liberated woman. A woman should decide how she is liberated or empowered. We, the men in society, cannot and should not make that decision for her. For instance, a group of four men sit down and decide for a woman, ‘this is your independence’. No!"

"A liberated woman means she is liberated from even all this. She can think and decide for herself. That’s one side. There were panels on education, #MeToo, mental health and such because these issues erupt in universities.

Last year, when we spoke about music as a theme, we spoke to the Sindh government on including music in the curriculum.

This year we focused on something else. Teachers blackmail students for marks. A girl can fail but she should have the authority to check her paper so there was this policy we wanted this year. The second was about gender-balance within universities, equal opportunities. We will pursue it."

Saif Samejo credits the curation of panels to his wife, Sana Samejo and says he finalizes the overall theme and is more of the artist-man. "I want the girl who had a traumatic incident at Lahooti 1 but didn’t tell us till after Lahooti 3 that this is for her, not for that dirty man. It is dedicated to her, to give her confidence and to others who can’t. I’m looking at all this dirt and I feel it has to come out or they will continue with their ways," says Saif, but I know the industry’s older ways of working and abusing anyone they can. And Saif Samejo and Lahooti will be there to lend support when those stories come out.