After the passage of the 18th Amendment, roles and responsibilities blur between the federal and the two provincial HECs 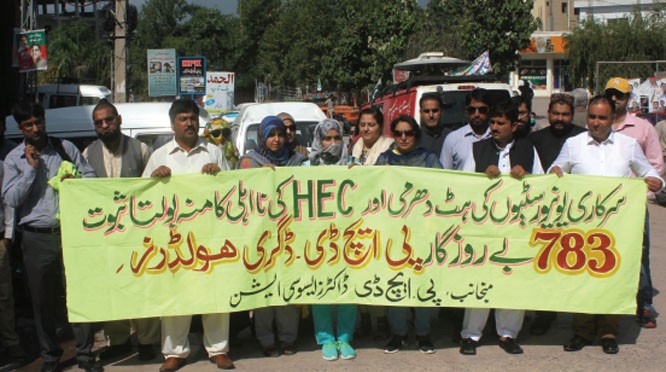 The federal Higher Education Commission (HEC) was established in 2002 under an Ordinance. The objectives were to reform centres of higher education, promote research in academic institutions, shift focus on science and technology, set standards and guidelines to be followed for quality assurance and so on in both public and private universities across the country. The HEC replaced the University Grants Commission (UGC) which had been looking after the affairs of universities, though its role was not as wide as the HEC’s.

In 2010, when the 18th Amendment to the Constitution was passed and education was devolved to provinces, the provinces questioned the powers and existence of a federal HEC. But the Supreme Court of Pakistan ruled in the HEC’s favour in 2011. The court’s stance was that the 18th Amendment would have no effect on the functioning of the HEC and, in case of any conflict, HEC Ordinance 2002 shall prevail.

However, issues about the Terms of Reference (TORs) of the federal and the provincial HECs remain unresolved. Both the governments of PPP and PML-N that took over in 2008 and 2013 respectively, slashed the budget of HEC by around 50 percent. Due to this measure, the fellowship and scholarship programmes for students enrolled in national and international universities suffered and research grants for faculty members were slashed.

A few critics believed the PPP government had taken this measure abruptly towards the end of its tenure because it wanted to bring degree verification in the purview of a provincial body. Balochistan and Khyber Pakhtunkhwa (KP) have not been able to form their commissions so far and are fully dependent on the federal HEC.

There is confusion among the federal and provincial HECs on their roles and overlapping responsibilities. The provincial commissions want the HEC funds be handed over to them for disbursement among universities in their provinces. Besides, the provinces want the HEC to not encroach upon their role to implement quality standards, related guidelines or monitor universities in their jurisdiction.

A source in the HEC points out this dichotomy has led to an unending tussle. An example of non-cooperation in this respect, he says, is that the ex-chairman of federal HEC, Dr Mukhtar, did not visit the Punjab  even once during his four-year term even though it was required of him to have such frequent interactions. The source adds that as the HEC provides funds to the universities for salaries as well as research and development projects, it has a stronger control over them. "The provincial HECs, on the other hand, are short of finances so they want control over functions like implementation of standards, monitoring, awarding of charter, etc. The federal HEC does not trust provincial HECs and wants to perform these functions as well."

The argument that the provinces present is that, ideally, standardisation and formulation of guidelines should be the mandate of the federal commission whereas monitoring, implementation and accreditation should be done by the provinces. Control over financial resources, which was handed over to the federal HEC by the Planning Commission, is another demand of the provinces.

Salman Abid, Executive Director, Institute for Democratic Education and Advocacy (IDEA) says there is blame game between the provincial and federal HECs." The HEC asserts the provinces do not have the capacity to manage affairs related to higher education and, therefore, do not want to share powers and funds with them."

Abid, who has worked with these bodies on education reform, questions why more than a dozen public sector universities in Punjab do not have permanent vice chancellors (VCs) and that the chief minister exercises the powers to select them through search committees?

"It is unfortunate that owners of private universities have been part of these committees which is a clear conflict of interest." He laments many universities do not pay heed to HECs’ instructions because HECs do not have powers to close them down. "All they can do is place warning ads to deter students from getting admission in certain universities."

Dr Nizamuddin, ex-chairman PHEC, believes the debate against provincial education commissions is part of the ongoing campaign to reverse the 18th Amendment -- a plan which may not succeed due to want of required numbers in the parliament. He says "education has been a provincial subject since 1935 and the role of federal HEC should be limited only to the provision of technical assistance and setting of standards, criteria and guidelines."

Managing day-to-day matters as well as providing funds to the universities should be provincial mandate. But what is happening is that the federal HEC is inspecting and monitoring universities in the provinces that have already been cleared by provincial commissions.

Nizamuddin also objects to HEC’s involvement in appointments of VCs and faculty members and says universities must be autonomous in this regard provided they fulfill the selection criteria. "The HEC was not giving due share of scholarships and research funds to Punjab so they requested the provincial government for money. We used this money to send 25 Ph.D and 90 post-doc candidates which is no small deal."

Another excess on the part of the federal HEC, he says, is that in order to establish its power it often refuses to verify degrees of provincial universities. "This must be the domain of provincial commissions whose powers and functions are too limited and usurped by the federal body."