How can you create new ideas and produce new knowledge in the absence of academic freedom, political education and right to association? 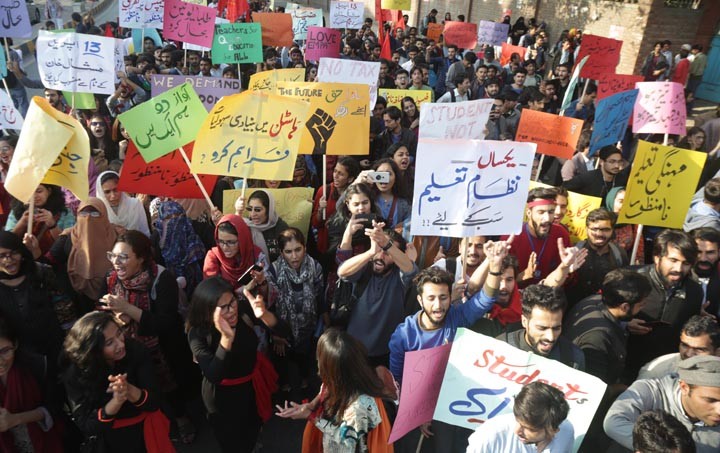 There is a grand plan made somewhere we don’t know, and everything is turning out as planned. The universities today are the mirror image of that plan. And so are political parties, parliaments, media. Actually the entire society. If you’re lucky, you can write and print reams of papers questioning the grand plan or the self-destructive tendencies of the mighty planners. However, for the moment, the plan seems rock solid.

Ideally speaking, the purpose of all education must be to prepare the students to deal with life, people and problems. But, in a university, the level of that preparation is raised. Here, the education happens as much in the classroom as outside -- through co-curricular activities, in conversations and debates, in developing a questioning mind and critical thinking, through protests, in organisation, in dispute resolution through peaceful means.

Of course, universities are places where new ideas, knowledge and research are created. But how is that possible in the absence of academic freedom, political education and right to association?

There is clearly something amiss in our idea of a university in a plan that prioritises economics over socio-politics. In this plan, a university is conceived as a degree-awarding institution, where students learn their lessons in a conflict-free environment, enter the job market and continue their lives as law-abiding responsible citizens.

In a free market economy, where the private sector is a major stakeholder in the business, the class bias is all too apparent, and marginalises a big section of this huge demographic called youth. The lack of opportunity is now institutionalised. Thus, it suits everyone to create and perpetuate an atmosphere of fear and silence. The university students must therefore sign undertakings at the time of admission that they would not indulge in any political activity. Even when student unions are banned in this country.

All of this has been said before, and everyone seems happy about it. Talk to the people around, the people living in the same middle class bubble as you, and they will tell you what an ideal world this is, compared to the violent 1980s when the universities stayed closed for months and years.

Beyond the middle class bubble though, the world is not so ideal, not even for the classes that claim it as ideal. Student unions as "nurseries of leadership" may sound like a cliché but the truth is that the grand scheme also creates a semblance of democracy. This scheme stops students from organising themselves as students but expects them to vote for future parliaments as soon as they turn eighteen.

At the university, these same students who are eligible to vote in a prime minister are not given a voice, any voice: they can’t say a thing about their own problems, let alone resolve them, question the quality of education and services provided to them, hold the private and public university administration to account or object to fee hikes -- all legitimate concerns that go a long way in helping them evolve into thinking citizens if not leaders of tomorrow.

While the nurseries do not perform their necessary function, the quality of citizenry and leadership in society suffers (In an interview on student politics, former student leader Husain Naqi recalls his own times -- in the 1950s and ’60s -- when the budget of the student union was debated in a much better manner than the provincial assemblies). Once the universities become barren lands and there is no local cadre of leaders, politics becomes dynastic, and democracy suffers a backlash.

Also read: In search of research

Even within the universities, the students’ problems remain. Often they tend to be resolved in a manner the grand planners had not envisaged. We have seen in recent times how the depoliticised young people in universities come together along ethnic or class or religious lines, and conflict among these groups leads to incidents of violence despite the absence of unions. Outside the university, too, they can’t be made to stop questioning and thinking. They gather in the form of one Movement or another, often ruthlessly suppressed by a state that considers the Movement ‘anti-state’. At other times, they feel isolated and find meaning in drugs.

The plan may seem rock solid. The structures may appear so well-rooted you can’t do much except lament in small gatherings or write articles such as these. But a plan that lets the universities exist as islands that have no connection with the outside world, and where the students think only in terms of their self-aggrandisement and not the society is not such a workable plan after all.