A new narrative for Kashmir

The phase of jihadi struggle is over; it’s time to explore a political solution instead 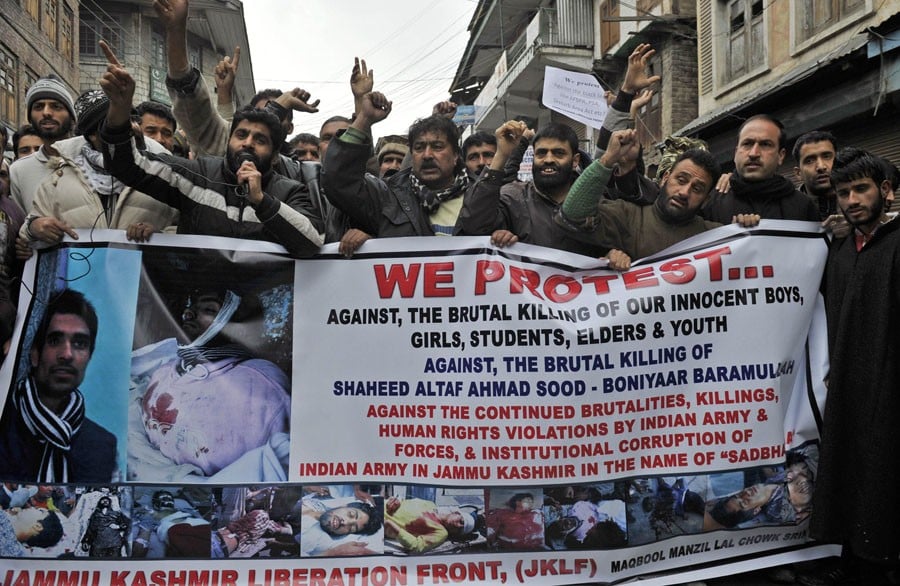 Enough of Kashmiri blood has been shed for the world to know that India cannot continue its forced occupation on the earthly paradise called Kashmir. Long years of militancy, heavy Indian military presence, incessant curfews and public protests brought life to a standstill and daily businesses to a halt in the valley. It is time the world pressed upon India to call its forces back from Kashmir, and give peace and politics a chance.

The phase of jihadi struggle is over. It’s time to explore a peaceful political narrative instead.

With outright and blatant cruelty of Indian forces, the Kashmir calamity has touched its worst level. No international body or sovereign country is in a position to push India into resolving the crisis. Whenever a world body raises voice against these atrocities, Indian government puts up incidence of terrorism and militancy as a reason. There was a time when freedom movements with undercurrents of militancy were condoned internationally but not anymore. Nine Eleven events have changed the world narrative: militancy, even for a sacred cause like freedom, has zero tolerance.

In this changed scenario, the strategy for the struggle of Kashmir needs a serious review. It is time that Kashmiris focused on the politics that they had shunned in the context of fraudulent elections and puppet state governments. The mass movement seems to be at peak these days and it can easily pave way for the Kashmiris to win a majority in the assembly. The only impediment to this peaceful political transition is fair and free election. Kashmiris can now convince the world conscience to pressure India to demilitarise the valley and hold free and fair elections under the supervision of international monitors. If India refuses to guarantee fair elections, it will prove the country has lost the confidence of the majority of the Kashmiris.

The rival parties to the Kashmir conflict have stretched themselves thin. India cannot send more troops to Kashmir and waste its economic might. Similarly, jihadis from Kashmir, Pakistan and other countries have lost so many lives without achieving much, and they can’t continue that indefinitely. Both parties have brought misery to the Kashmiris. This crisis seems to have no solution if both parties stick to their present narrative. To be realistic, India cannot afford to commit more atrocities there because of the growing international pressure. On the other hand, jihadis too have their limitations. They have sacrificed hundreds of youngsters but have not been able to muster enough international support or sympathy. They are still labelled as terrorists rather than freedom fighters. Both parties need to change their narrative and strategies stopping bloodshed immediately and talking the issue out. The best way forward is not arms and bloodletting but politics and dialogue.

Usually, the political front leads the movement while the militant one remains in the shadows. Unless there is mass support, no militant entity can force the way to freedom.

Historically, almost all freedom movements have two fronts, political as well as militant. Usually, the political front leads the movement while the militant one remains in the shadows. Unless there is mass support, no militant force can force the way to freedom alone. The Irish Republican Army has had to put their political front forward to lead to a negotiated settlement that ended decades of political conflict in Northern Ireland in 1998.

The Khalistan Movement went out of steam because the militant front overpowered the political front. Militant front getting more powerful than the ideological political front has always proved disastrous. Khalistan militants used to dictate their political masters rather than follow them and the rest is history. In Afghanistan, too, there was no popular mass movement; instead, militants or jihadis led the freedom fight. It was alright in the days of war but, in times of peace, the militants did not know what to do and are still fighting. Had there been a strong political front in Afghanistan, it would have transformed the country from a war zone to a peaceful one.

The Palestine Liberation Organisation (PLO) had two fronts: political and militant. The political wing led by a Yasser Arafat and Mahmoud Abbas successfully negotiated the two-state solution with Israel through the Oslo Accord. But this peace effort was foiled by the militant Hamas and the progress towards peace is now halted. Israel has a lame excuse of its occupation of Palestinian territories: Hamas resistance which it calls ‘terrorism’.

The movement for Pakistan was peaceful. Its other militant equivalent was Allama Mashriqi’s Khaksar Tehrik which wasted all its energies much before time and went to the dustbin of history. Same was the fate of other hardliners such as nationalist Muslims of Punjab, mainly religious leaders, who called themselves "Ahrars" (people in red robes) under the banner of Majlis-i-Ahrar-i-Islam, just before the creation of Pakistan.

The present Pakistani doctrine of peace with neighbours can lead to a political narrative for Kashmir and develop a new strategy to pressure India into holding free and fair assembly elections in the disputed region.

A new narrative for Kashmir