At a lecture at Harvard University, Bilawal Bhutto-Zardari refuses to play to the gallery on how he plans to implement his welfare agenda 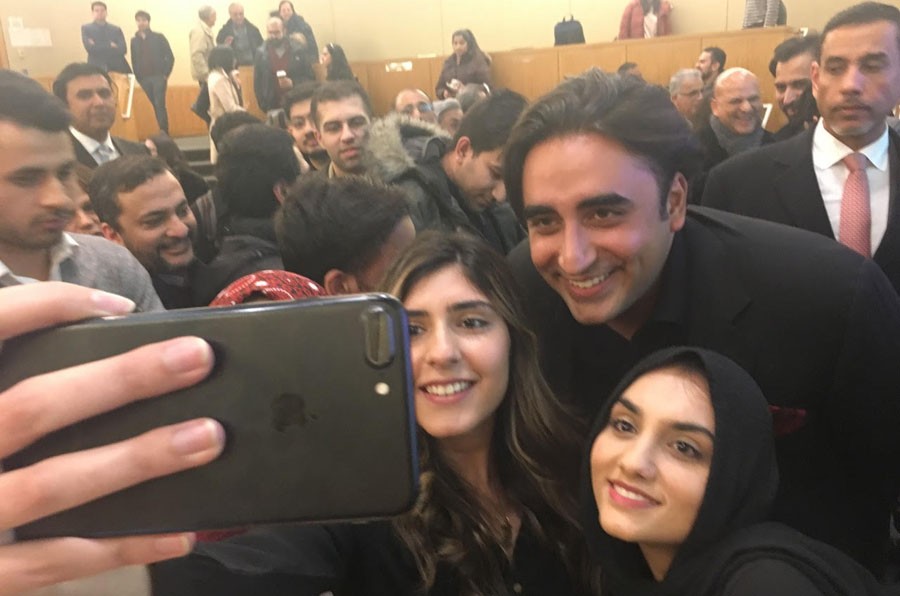 Martial arts experts are not just physically fit, they also tend to have great mental and emotional stamina. Traits like calmness, humility, respect even to opponents, straight speaking, persistence, endurance, loyalty. Watching a video of Bilawal Bhutto Zardari responding deftly to a senior Indian journalist at Davos last year, I wonder how much of his manner he owes to his Taekwondo black belt.

The thought crops up again at his recent talk at Harvard University at the end of which he responds to audience questions. Despite a barely three-day notice, the lecture hall is packed. Students, professors, community members, supporters who drove for hours to attend, some PTI supporters. Surprisingly, no disruptions.

Reading out a comprehensive paper on ‘Pakistan’s youth and the welfare state’, Bilawal details initiatives that the PPP manifesto upholds as basic rights: health, education, employment and the new one, food security ("He doesn’t write his own speeches," asserts someone. I checked. He does).

If he’s nervous giving his first college lecture, it doesn’t show. Those who expect a populist show are disappointed. He doesn’t play to the gallery. There’s no flamboyance, no arrogance. Sometimes those at the back strain to hear. "I have to work on projecting my voice," he apologises.

He’s at his best speaking extempore in response to questions. He tends to give the person who asked his full attention, only occasionally remembering to glance around.

Challenged on how he plans to implement his welfare agenda of free healthcare and education and eradicating hunger (the planned ‘Bhook Mitao’ programme and Right to Food Law) he comes back strongly, taking the long view.

There are "no overnight fixes". If other poor countries like Cuba can provide free, quality healthcare for their people, so can Pakistan. "It shouldn’t be that if you can’t afford to pay for it, you will die".

Pakistan must transition away "from being a security state to one which genuinely caters to the basic needs of its people". There’s a long way to go but "We have to invest now. We can’t say we’re too poor to look after our people. We have the world’s sixth largest army. We came up with the money for a nuclear bomb. We come up with money when we need to".

Since devolution, Sindh -- the only province to meet its revenue targets -- has expanded free healthcare, making the National Institute of Cardiovascular Diseases "the largest hospital in South Asia to provide free heart care". Branches of the Sindh Institute of Urology and Transplant have been opened across the province. Maternal and child mortality have been reduced by 50 percent. There are in fact many examples of good governance. "We do it better. We just don’t sell it better".

Interest free loans to women in a million poor households is another "provincial success story". With an over 97 percent rate of return, "we aren’t doing badly there either".

Devolution following the 18th Amendment enabled better service delivery, particularly after changing the criteria for resource distribution to account for factors like poverty and backwardness, rather than just population. "The Shahbaz Sharif government got the most money under devolution".

To the inevitable question about nepotism, he responds, "Nepotism will always stunt the growth of any party".

But his mother wouldn’t have gone into politics if a military dictator hadn’t hanged her father. And she wasn’t handed her position. She "struggled for it… she had to prove herself. She suffered solitary confinement in 50 degrees centigrade heat".

He wouldn’t be doing this if he didn’t feel compelled to carry forward her mission since taking the plunge ("He lives and breathes politics," says an aide).

Dictator after dictator has ruled Pakistan. "Every institution is run by an ex-general -- but that’s not called nepotism…"

Bilawal remembers Kulsoom Nawaz admiringly, how she "came out and stood against the dictator of the day… I don’t hold it against her that she’s related to Nawaz Sharif". And isn’t it ironic to discuss dynastic politics in Boston… "the Kennedys are really big here".

He disagrees politely with another questioner about the issue of patronage. "Everyone can improve… We don’t believe in sacking people, we believe in providing jobs" -- and most, he contends, are on merit.

Some of these steps require parliamentary consensus. There was bipartisan support for Sindh’s Benazir Bhutto Income Support Programme in 2010, which benefits the poorest women -- the largest unconditional cash assistance programme of its kind, an "example for the world". Subsequent governments, including the present one, have carried forward its health insurance component Waseela-e-Sehat under different names.

Women are major contributors to Pakistan’s essentially rural economy, but their labour -- which includes looking after children, livestock, households -- goes largely unrecognised and un-compensated. Registering women agricultural workers is a step towards legislating to protect their rights.

All this may seem simple "and we think it ought to be, but it will have major implications for society and state".

His martial arts training appears to be standing Bilawal in good stead so far. It is a resource that he may have to draw upon quite often in Pakistan’s turbulent politics.