Thirty two stories of struggle, political turmoil, war, and what it really means to be an Asian 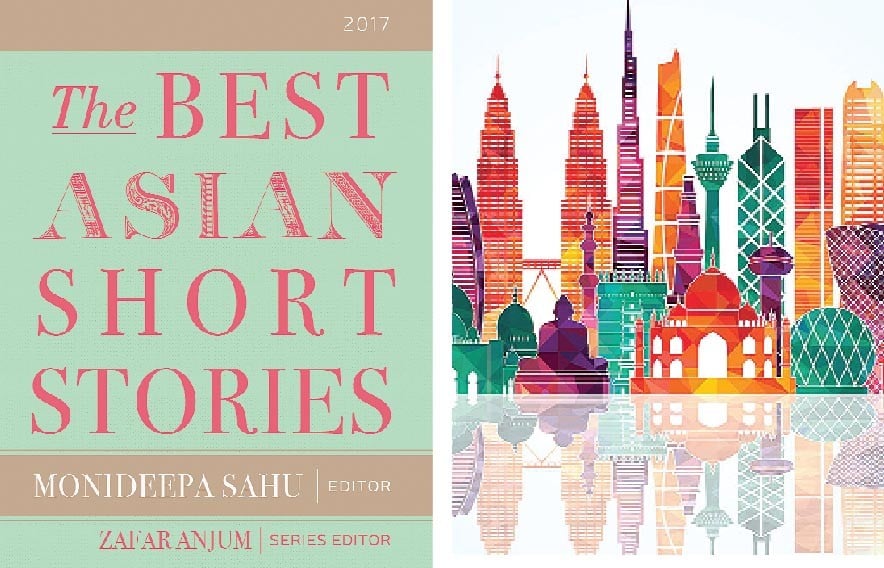 Asia, the world’s largest and most populous continent, home to 48 countries each with their own diverse cultures and subcultures, languages and religions, presents an interesting situation: What is it to be ‘Asian’? It almost seems impossible that such an expanse of land would have narratives that are similar and relatable, given the uniqueness of the multitudes residing within each Asian nation. Yet in The Best Asian Short Stories of 2017, "different voices, viewpoints and themes combine to shed light upon various facets of the Asian experience," writes Editor Monideepa Sahu in her foreword.

The anthology contains thirty two stories ranging from the skyscrapers of Korea, to the deserts of Jordan, from the rainforests of Malaysia and the historic anguish of the Indo-Pak partition to the impoverished slums of Bangladesh, just to name a few. The particular focus of this omnibus of short stories is precisely the home-grown Asian identity, free from Western attempts to explain what they see as quaint and exotic. The stories ‘Jellybeans’ by Soniah Kamal and ‘The Spaces Between Stars’ by Gita Kothari, which are set in the United States of America are still narrated from the Asian perspective.

Though the call for submissions prescribed no set theme, larger motifs such as extreme poverty and the quest to improve one’s living situation through brutal hard work emerge across the stories; for example in ‘Ladybugs Fly From The Top’ by Korean writer Park Chan-soon, our acrophobic window-washing protagonist dangles daily from the tops of skyscrapers with only ropes attached to a small board, risking his life to make a living. A poor construction worker’s family converts to Christianity from Hinduism in the vain hopes that "their escape in the dead of night from one identity into another" will help transform their lot in life, in ‘Patchwork’ by Shikandin.

In Mithran Somasudrum’s ‘The Yakuza Under the Stairs’, Clisty’s tale is a slightly less morose one of rags-to-riches, when the humble immigrant cab driver finds himself the unsuspecting recipient of a sizeable inheritance. The story takes a humorous turn when a pronunciation mixup leads our newly moneyed protagonist to accidentally order a Yakuza (i.e. Japanese gangster for hire) instead of a jacuzzi, for his new home in Thailand.

Of course, no collection of Asian narratives can be truly representative without reference to the long period of political turmoil and upheaval in the subcontinent, which forms five stories housed in this panorama, but each tale reveals a unique facet of the struggles countless individuals faced.

The troubled Kashmir forms the backdrop for Siddhartha Gigoo’s ‘The Umbrella Man’, the story of an inmate at an asylum which parallels the persecution of Hindu Pandits in Kashmir, cast out from their motherland as refugees, their identity as a community stands endangered with no salvation in sight. Left isolated and expelled from Kashmiri society, they are akin to the inmate at the asylum, "For the inmates, the world ended at that wall. Beyond that brick-and-stone wall was a vast darkness, an oblivion." The horrors of war and its effects on the natural beauty of Kashmir and the lives of brave youths who enlisted are further illustrated in Ilakshee Bhuyan Nath’s ‘The Wetland’.

Our subcontinent, unfortunately, is not the only region affected by war: a young mother fleeing war-torn Aleppo is the central figure of Amir Darwish’s ‘Samar’, and the horrors of China’s Cultural Revolution and a childhood spent in starvation during a famine are elucidated by an elderly woman to her young niece growing up in a time of prosperity in Jeremy Tiang’s ‘1997’.

Female protagonists that are breaking away from the tropes of battered and oppressed women populate many of the short stories found in this collection, some like ‘Lilly from Fits and Starts’ by Yu-Mei Balasingamchow and ‘Moyna in Powerless’ (a translated work) written by Moinul Ahsan Saber rise above their difficult circumstances and take charge.

Lilly holds her own as the only female 24-hour delivery rider for McDonald’s, filling in for her brother to support her family while he is behind bars. Her beauty and femininity is juxtaposed with her no-nonsense and often defensive exterior, an occupational hazard for females who work in a male-dominated environment. "She moved the big bike stiffly, and although she was tall enough to swing her leg over it, things got unwieldy when she strapped on the bulky backpack they used for transporting the food. Once, Zul had offered to hold the backpack while she mounted, but she barked him off."

The challenge taken on by the editors of this collection was no small feat. The American equivalent to this compendium The Best American Short Stories selects its contents from works already published in literary journals, whereas Monideepa Sahu had to trawl through numerous submissions. Deciding what qualified as "the best" Asian short stories meant struggling through the deluge of entries and an acute reader’s block for Sahu.

Whilst inclusiveness was a goal when consolidating the selected submissions into a book, out of thirty two stories contained in the anthology only four are translated works- a number that one would expect to be far greater given the rich linguistic heritage of Asia. Central Asian short stories also remain conspicuously absent from the winning essays. Nevertheless, the goal of gleaning transferrable themes of humanity across the stories proves to be not only a successful one but an illuminating and enjoyable one in this inaugural endeavour in collecting the finest short stories written across Asia.