The techies -- freelancers, startups, and remote teams etc -- are now increasingly becoming attracted to the idea of coworking spaces. Also, buying workspace was never this easy 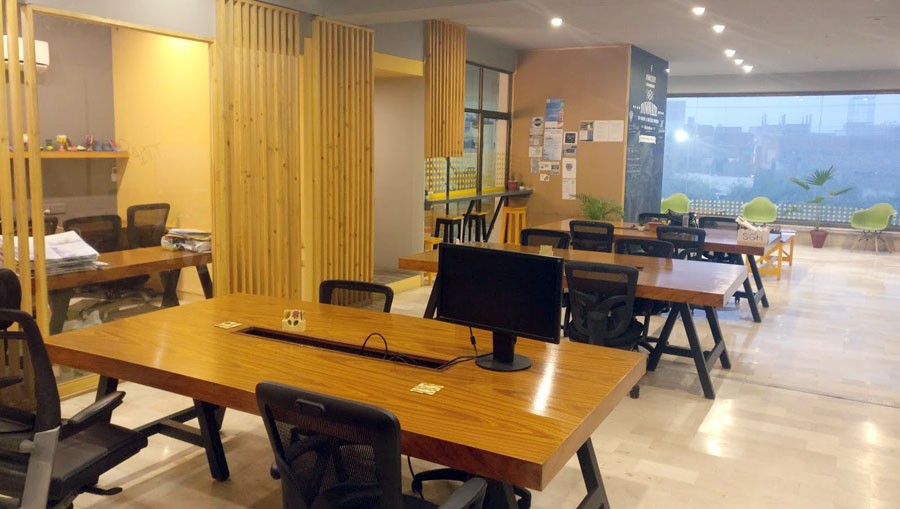 Who isn’t looking for a swanky office with power backup, wi-fi and secure parking, among other things? That, too, on a monthly payment plan that suits most people’s budget? Yes, I am talking about coworking spaces. The techies of Lahore -- freelancers, startups, and remote teams etc -- are now increasingly becoming attracted to the idea.

Coworking space has roots in the gig economy -- that is, freelancing. Freelancing websites like Upwork, Fiverr, and Freelancer have all opened new opportunities and vistas for both employers and freelance workers. Everything from mobile development to accounting and content writing tasks could now be outsourced to the lowest bidder across the globe. Freelancers needed a space to work and that call was answered by coworking spaces.

So what is available at these coworking spaces? Rates vary from facility to facility but generally you can get a 3-4 feet working space, wi-fi, electricity, heating/cooling and services of an office boy, from Rs7,000 to Rs12,000 per month. Some places also offer the facility of day pass, which means you pay, let’s say, Rs1,000 and have your office space at your disposal for the entire reception hours.

Besides shared spaces, there are dedicated office spaces for companies or remote teams in these facilities. These spaces are cordoned off, and have dedicated internet connectivity to ensure privacy.

TNS spoke with Umer Baig, Marketing Head of PopCorn Studio that has two upscale coworking spaces in Lahore and one each in Faisalabad and Rawalpindi. He said, "We follow the model of Wework [a multibillion US company]; we keep margins low and focus on providing quality services to maximum number of people.

"The main clientele of our organisation is composed of IT services providers, offshore teams of foreign [mostly tech] companies, and freelancers. I think the main attraction of coworking spaces is the cost, or rather the absence of it," he added. "There is no upfront cost or exorbitant advance rents -- you pay as you go."

Baig also spoke of routinely inviting leading names of the tech industry or prominent freelancers to deliver motivational talks. "At a nominal rate, as low as Rs1,500 per hour, we offer space for trainings and meetings."

Everything from mobile development to accounting and content writing tasks could now be outsourced to the lowest bidder across the globe. Freelancers needed a space to work and that call was answered by coworking spaces.

Elaborating that coworking space is not for everyone, he said, "It is not for some of the brick-and-mortar businesses. We do sometimes get odd queries for godown space etc.," he said, chuckling.

Waqas Akram lives and works in Cambridge, UK. On the side he has ventured into tech startup. He manages a team of five people based in Lahore for his enterprise. His Lahore team is based in a coworking space in the Johar Town. "I do not have to worry about the day-to-day hassles of maintaining a separate office [in Lahore] for my team," he said.

"You are not just hiring an office, you are also becoming a part of the tech community from which you can learn and seek guidance."

Akram pays Rs7,000-10,000 per month per head for the coworking spaces. Currently, he feels that the expense is justified but as the business scales up he would either move them to a regular office or shift to a larger room allocated exclusively to his company within the coworking office space.

"Before moving, it used to be difficult to hire female staff because the office was located at a far-off area and there were no other ladies in the team. When we moved to the coworking space we had no such issues in getting female talent on board," he added.

For Nabil Ashraf, coworking spaces are a "trendy, affordable and convenient alternative" to a regular office. He runs a digital agency with his partner at a coworking space on Wahdat Road. "Everyone minds his/her own business here. We can hire freelancers for our projects and place them at the same facility. For meetings we can use a dedicated meeting room.

"The networking opportunities and the sense of community that you have at the coworking spaces simply cannot be had at a regular office."

Similar views were echoed by Saad Khan, an IT expert, who provides offshore clients with freelance software testing services: "I started working from home; there were simply too many distractions. Siblings and parents were constantly bombarding me with requests to do their chores. Whenever the internet broke down, I basically couldn’t work. At a coworking space, there are very few distractions and we have electricity/wi-fi backups. My productivity has improved a lot."